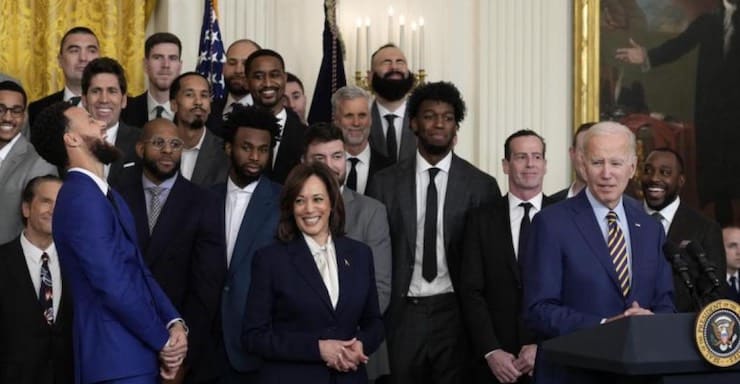 Every year, the NBA Champions are welcomed by the President of the United States to the White House to celebrate their victory.

This week, President Joe Biden hosted the Golden State Warriors as part of their 2022 NBA Championship win. During the momentous occasion, President Biden admittedly forgot one of the splash brothers, stumbling over Klay Thompson’s name during his speech.

Of course, this isn’t the first time that Thompson’s name has been forgotten. He was infamously left off of the NBA’s list of the 75 greatest players of all time.

Golden State’s White House visit will be a memorable one for Warriors fans, as President Biden forgot Thompson’s name.

During his speech, Biden was talking about how the Warriors reimagined his roster around the Big 3. He went on to acknowledge Steph Curry and Draymond Green but paused and forgot Thompson’s name. Biden can even be seen looking behind him to ask.

Curry and Thompson are one of the most dynamic backcourt duos in history. It’s a hilarious blooper for the President to forget the other half of the Splash Bros.

While Biden has never been a basketball fan, the moment will forever be one of the most memorable White House Visits by an NBA team.

Check out the video of Biden forgetting Thompson’s name below.

Warriors Return to the White House

Despite winning their fourth championship in eight years, this is the first time the Warriors have been back to the White House since 2017. Their White House Invitation was withdrawn by then-President Donald Trump in 2017 after Curry said he wouldn’t attend.

The Warriors have won two championships since they’ve been back to the White House and collectively the franchise under Curry, Thompson, and Green have won four together dating back to 2015.

Warriors’ Thank You Speech At the White House

“It’s something we don’t ever take for granted. Seven years ago, we were here last celebrating our first championship,” Curry said.