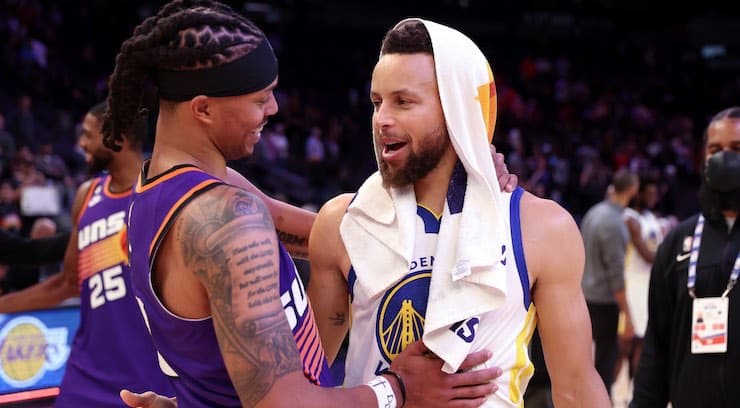 The Golden State Warriors and Phoenix Suns enjoyed a heart-warming moment prior to their content at the Chase Center on Tuesday night.

Suns guard Damion Lee returned to the Bay Area for the first time since winning the NBA title with Golden State last season. The Warriors welcomed him back with a tribute video and brother-in-law Stephen Curry presented Lee with his NBA Championship ring.

Lee is married to Sydel Curry, the daughter of Dell Curry and Steph’s younger sister.

Watch the full Damion Lee tribute video and Stephen Curry give him his championship ring below.

Lee, who won his first NBA title with the Warriors, spoke about the moment before the game, calling the moment “special”.

An undrafted free agent, Lee took the long road on his journey to becoming an NBA champion.

Prior to joining Phoenix, he played four seasons in Golden State and averaged a career-high 12.7 points per game in 2020-21.

Following the season, he signed a 1-year, $2 million contract with the Suns.

Damion Lee is so grateful to have won his first ring with the Warriors and have it presented tonight by brother-in-law Stephen Curry before the Suns face Golden State. pic.twitter.com/zGPTSusTeh

Lee Steals The Show As Suns Catch Fire vs. Warriors

On a night when Curry returned to action after missing 11 games with a shoulder injury, Lee stole the show.

Phoenix went on to defeat Golden State 125-113 and Lee played a major role in the victory. The 30-year-old guard scored 22 points off of the bench and shot 14-for-14 from the free throw line in the win.

On the other hand, Curry finished with 24 points on 8-for-22 shooting, including 5-of-15 shooting from 3-point range.

Lee is averaging 8.2 points and 3.4 rebounds per game on 48 percent shooting from 3-point range this season.