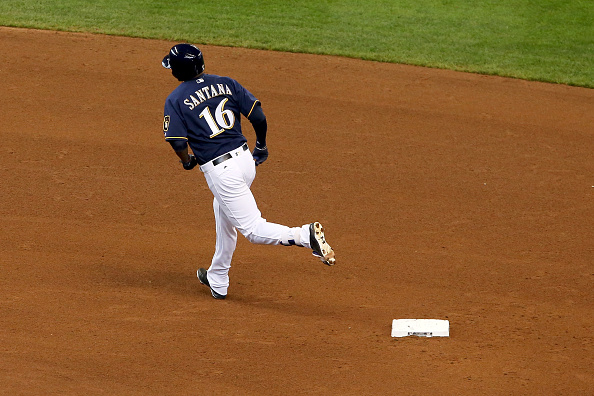 Eric Thames Tells Drug Testers to Bring it On: When the Brewers were in Chicago recently, the defending world champions won two out of three, so you’d think there would be no reason for any of the Cubs to be a-holes.  Think again.  John Lackey and Chris Bosio both kinda sorta implied Thames might be using PEDs.  Apparently the drug warriors at MLB think they may be on to something, as Thames was tested for the third time in ten days last week.  I suppose this is the world we live in, where suspicion taints every impressive athletic accomplishment, despite former MLB commissioner Bud Selig’s very public war on PED users.  I guess we’re supposed to assume that war, like the other drug war, was totally ineffective?

That said, Thames seems to be taking the whole thing in stride.  In fact, he’s basically challenged drug testers to do their worst.

Eric Thames was drug tested again tonight. "If people keep thinking I'm on stuff, I'll be here every day. I have a lot of blood and urine." pic.twitter.com/De1smFWVj7

It’s comforting to see Thames has a good attitude about the whole thing…not to mention reassuring to Brewers fans who have had to endure one PED scandal already.  Maybe Thames is so chill due to meditation.  Frankly, I wouldn’t put it past MLB to ban meditation if they thought it was giving players an unfair advantage.

Brewers Don’t Play the Reds Again Until the End of June: Nothing especially lame happened last week, other than the bullpen giving up a boatload of runs against Atlanta.  But that seems like the usual ebb and flow of the season – sometimes a bullpen is going to get hammered.  That shouldn’t bring fans down too much as long as it doesn’t become a habit.

One thing that is kind of a bummer is that the Brewers don’t play the Reds again for more than eight weeks.  The Brewers have won six of the seven games they’ve played against Cincinnati, pummeling the Reds with a +27 run differential.  Drug-free Eric Thames has almost single-handedly slaughtered the Reds, putting up a 1.976 (!!!) OPS.  The Brewers are going to have a hard time staying average if they have to wait a whole two months to face the Reds again.

Domingo Santana: Some Brewers hitters that had gotten off to slow starts showed signs of turning things around last week.  Orlando Arcia raised his average from .210 to .247, Jonathan Villar got himself above the Mendoza line, and Hernan Perez put 8 RBIs on the board against the Reds.  Although Santana is currently sub-Mendoza, his two homers represented the entire run output in yesterday’s game against the Braves.  His first homer broke up a no-hitter that had made it into fifth inning, and broke it up with authority, hitting the bottom of the center field scoreboard.

His second homer was brilliantly timed, not just giving the Brewers the lead, but also coming right as FS Wisconsin was replaying his first one.

Santana still has work to do, but without his performance yesterday, the Brewers likely would not have finished April with a spectacularly average 13-13 record.  Considering the Brewers’ record in the previous two Aprils was 13-32, being average is a step in the right direction.

The lopsided rivalry with the goddamn Cardinals continues in St. Louis tonight with yet another four-game series.  Although the Brewers lose to the Cardinals quite a bit more often than they win, it’s less rare for them to get a series win or split in St. Louis than in Miller Park.  In fact, they just got a split against the Cardinals in September.  Here’s to the Brewers’ average play continuing through the first part of this week.

The road trip continues in Pittsburgh for the season’s first meeting with the Pirates.  The Pirates had a below average April, but the whole NL Central is only separated by two games as of this writing, so it’s anyone’s guess who will be the hot team going into this weekend.  It’s been a while since the Brewers had their own lopsided rivalry with the Pirates, but Milwaukee is still relatively competitive against Pittsburgh, which only won the season series by one game in 2016.  Given that the Brewers played well on the road in the first month of the season, maybe an above average week is in the works.