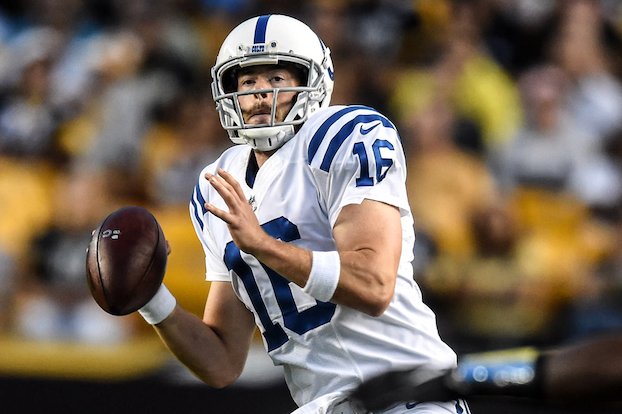 Our starting QB has had offseason surgery clouded in mystery that everyone insisted he would be back from at the start of the season. Except that he didn’t make it back. And now we’re stuck with a backup that is nowhere near as talented and is all but assured to lead us to sadness.

Shockingly, it is not 2011 and we aren’t about to watch Curtis Painter (thank heavens). But it is 2017, and we will have to watch Scott Tolzien (unless you keep your eyes closed, which, well, maybe you should). So to celebrate that together, let’s have a running diary! It will bring all our favorite parts of #SnarkyColtsTwitter into blog form. And there isn’t a single thing I can think of that might be more necessary in the world.

15:47 – First off, we use military time here, because naming two different times the same thing during the same day is inane. The Colts are in LA to play the Rams because apparently the Rams no longer play in St. Louis. LA needs a football team just as much as LA needs more cars.

The only thing sadder than the Colts starting Scott Tolzien is that maybe he's not the worst starting QB in the AFC South. What a mess.

Are dumpster fires your jam? Then the AFC South is the football division for you. It’s the bomb [dot] com.

16:01 – Oh look, it’s our hero Scott Tolzien. This is a thing that Rob Chud said this past week, “He just has to be Scott Tolzien, and the best Scott Tolzien he can be.” The thing this makes me think of is the old Army slogan. I don’t think it’ll work for Scottie. #BeAllTheTolzienYouCanBe

16:05 Colts won the toss and deferred. What is life? Does Chuck Pagano learn things about coaching?

Wow. That crowd is fitting for a matchup of Scott Tolzien and Jared Goff.

Wow, there is nobody there. LA aggressively doesn’t care about the NFL. It’s amazing how much push there was from the league to get two (!) teams to it’s media home base despite there being no actual desire from the people of the city to have a team.

16:09 We have a score. The Rams Goff’d their way down the field and kick a field goal into the adoring arms of their throng of fans.

"The Colts will play to Tolzien's strengths."

Can we get a list of those? Because I’m not sure I know what they are.

16:19 No one could have possibly seen this coming. There is definitely no one to blame. Not the GM or owner or coach or anybody. Not to mention that there are certain Super Bowl appearing quarterbacks just out there for free.

Stephen Morris should be starting this game. Colts bungled the QB situation about as bad as they possibly could have

16:23 So, it has been talked about, but it was super weird that the Colts reshuffled the offensive line right before the start of the season. Consistency is the best thing for o-lines.

16:25 Marlon Mack’s first NFL touch is a screen pass where he scores a TD! Except that the officials don’t call it such and Chuck Pagano doesn’t bother challenging. So that’s not great! And now the Colts get to settle for a FG. Too bad there is no possible way you can try to get a call corrected.

It took less than a quarter for Chuck Pagano to do something stupid. #YearSix

FG try at the goal line. I can't even muster outrage. So close to the end of the Pagano Era, I can almost taste it. Keep on kicking, Chuck.

Nate is way too optimistic about Chuck leaving the Colts. He is the man that can not be fired, no matter the transgression.

16:31 There is a joke about the fact that the Colts can’t get close to Goff even as he’s falling over in the pocket, but I can’t think of it.

"Colts coaches tried something there and it really backfired." CBS unintentionally summarizing the past 6 years.

I can’t think of the last thing the Colts coaches tried outside of their worn down cliches that worked well.

16:37 The problem I have with this running diary is that now that I started this, I’ve committed myself to actually watching this entire game. And I don’t know if I can actually do that.

Remember how people complained about it the whole time? Hope you like three-straight years out of the playoffs. Cause that's what you got. https://t.co/WjGoqH1g7r

The revisionist history about Peyton Manning (well, it was history wrongly written as it was occurring) is the most frustrating thing of ever. Peyton, very clearly, is the Greatest Quarterback Of All Time, and some dolts cast doubts on that and then everybody started running with it. It’s the dumbest.

16:41 While I was complaining about people being dumb about Peyton Manning, TY decided to fumble. Not great, Bob!

Colts with 2 turnovers on their half of the field in the 1st quarter.

Zac’s ability to predict the future is uncanny.

16:47 So far, the best skill that the Colts have shown is the ability to make the Rams false start. And I’m not sure that is an actual skill.

16:51 Andrew Luck is alive and there is photographic evidence. Somehing tells me he’s not going to play at all this year.

No way Colts could have figured that out prior to Week 1 of the regular season, after he's been on the roster for a year-plus, to be fair. https://t.co/L6jP9THCdE

How is it that the Colts are so incompetent at scouting their own players? It is remarkable in every single way.

17:02 The Colts gave up a touchdown and everything is terrible.

Chuck Pagano is the head coach of the Colts. https://t.co/1SKjAryaHc

17:07 Let’s take a break to watch a hilarious piece of propaganda. Imagine if the Colts spend the money they spent on this ad on an analytics department, or invested it in figuring out why their players get injured at an abnormal rate, or luring in a team president in order to actually give the franchise direction.

Family. Hard work. Respect. In Indiana, we know what it takes to earn it. And for all those who don’t know? They’re about to.#ColtsForged https://t.co/nVFOnszq20

17:11 The Colts defense has given up their second touchdown of the day and Colts Authority writers are developing a case of the sadness.

Earlier I sent @MarcusDugan an email saying I was happy to keep doing film breakdown for @ColtsAuthority. So I have to watch this again.

17:14 Colts have a long completion to T.Y. If you roll back on your DVR, you can see just how bad Tolzien is. T.Y. has to check up 5 yards early and come back to the deep ball. If Scotttolzien was good, that has a chance to be a TD.

I mean realistically speaking I don't think the Tolzien colts can score 25 points even without the pressure of NEEDING to.

There is zero value in playing Tolzien the rest of this game. Or season. Or ever.

Unfortunately, this was also true before the game and Chuck Pagano is still the head coach. It just doesn’t matter how good players play.

17:29 The Colts are very bad and this is no fun. They go into half down 24 (twenty four!) points down to the Rams. #ColtsForged

17:51 Does Chuck Pagano think we’re dumb? Is that why he talks up Scottttt? Like, we all have eyes. We all can tell that Scottttt is not good.

17:57 I quit this game. Much like Chuck Pagano did before it started and much like this team has. Maybe I’ll see you next week. Maybe it will be next year.