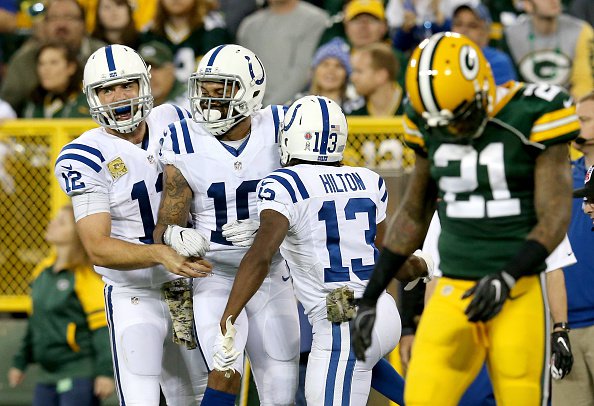 Hello, Colts fans. This week’s is maybe the lightest mailbag I think we’ve had during my time at CA. Compared to some of the previous ones, it barely qualifies as a leaflet. It’s alright, though. People have a tendency to talk more when the team plays poorly, and last week the team did not. There’s also the matter of a certain event Tuesday night which captured most people’s attention. You want some football politics? Here you go: With a motion on the floor to end the Colts’ season, the team filibustered well enough against Green Bay to have the motion thrown aside (at least until they lose again). We’ll take it.

Let’s see what’s on your minds…

Q: What time does the Irsay intervention start? I’d like to be in the inner circle. – Kimberly Anne via Facebook

I’m going to link to a video the team posted Wednesday where Jim gave his “State of The Shoe” address. There’s nothing really revealing in it, but I think Jim was pretty honest in his assessment of the way things have gone through the first 9 games. Critics – and I have been one many times – might say “We’ve known this for weeks!” or something, and that’s valid, but I think the difference here is in his tone. He’s more matter of fact as opposed to a “rah team rah!” approach we normally get.

While we can’t go off screaming “playoffs baby!” yet, I do feel better after the Green Bay game than at any point in this season. Maybe hold off on the Irsay intervention for another week.

Q: Will they ever figure out an offensive line to protect Luck? This is getting ridiculous – Christy via Facebook

This question was actually submitted last week, but it came too late for me to include. Even though Christy’s old school (and their officiating crew) whooped my old school in the state playoffs a couple of weeks ago, I’m willing to let bygones be bygones and answer her question.

The short answer is probably not. I believe Sunday saw them use their 6th different starting line in 9 games. Injuries happen and they happen to every team, but in the case of the Colts the injuries to the line have really messed with the continuity. The play calling isn’t always favorable to the personnel upfront, either. I still say this isn’t a horrible unit like most want to believe, but the key to them playing better is going to be based on how the offense is planning to attack. I’ll elaborate more later.

I thought Anthony Castonzo played really well Sunday. He had a few moments where he looked silly, but he made a terrific block on Frank Gore’s first touchdown. Jon Harrison helped cause Luck’s first interception when he slipped (BTW, what was wrong with that field Sunday? It’s a miracle no one was seriously injured) and his guy was able to hit Luck as he threw, but he rebounded and also made a nice block on the first Gore touchdown. Both Jack Doyle and Dwayne Allen made terrific blocks on Gore’s second touchdown. The entire group – including Gore – did a good job of stopping the blitz on the long pass to TY Hilton that sealed the game.

Q: The win against Green Bay was a good one, but is it enough of a win to say they’ve found their niche or turned a corner? – Jodi via text

As happy as it all made us, we do need to keep the win in perspective. Oakland, Minnesota, Pittsburgh, and Houston still remain on the schedule. Oakland has emerged as one of the best teams in the AFC, at least on the offensive side (BTW, make sure you tune into this game even if the Colts’ season could be done by then. It may be the highest scoring game in NFL history). Minnesota has, as expected, tailed off after a 5-0 start, but their defense may be the best one the Colts face all season. Pittsburgh? Yeah, let’s move on. Houston is certainly beatable, but it won’t be easy. There’s still a lot of football left, and with this team there’s no telling what might happen.

Let’s be happy, but cautiously optimistic.

Q: Holy crap we beat Green Bay, and it was better than the score would make you think. Are we getting better? Is Green Bay that bad? Or is a combination of the two? – Nick via Facebook

It was a weird game. It felt like a game the Colts won easily, yet a play or two going another way and the result on the scoreboard is different. It wasn’t a picture perfect game for the Colts, but it was probably their best game overall as a team. Jordan Todman got things going right off the bat with the 99-yard kickoff return. That was a huge, huge start. I know it made me feel better about the game. Todman ended up being named AFC Special Teams Player of the Week for it. I felt good for him because he made the roster based on his special teams play, but has had a couple of screw ups this season where he cost the team field position when he messed up downing punts.

It’s probably a combination of the two. Is the team getting better? It depends. Are they going to come out and execute like they (mostly) did against Green Bay from here on? If so, then yes, I believe they will do better.

I thought the offense played well for the most part. The drives at the end of the first half and at the end of the game are the way this team needs to play. On the surface it sounds easy to say, but I’m not saying it just because they executed and ended up with a positive outcome. The drive at the end of the first half was incredible. They stopped calling plays where Andrew is 25 yards behind the line when he tries to throw, went with the quicker stuff, and boom, it worked. They didn’t push the tempo much – it was more of a patient, methodical drive – but they were running quicker plays compared to what they were doing earlier. And it worked. Imagine that. When they play this style, no one in the NFL can stop them. No one. Where it gets ugly is when they get away from what works.

Defensively, it may have been their best game of the season. It sounds funny to say that when you give up 26 points, but this is where we are. The defense is not good and it won’t get better from a personnel perspective, but it proved it can play effectively enough to give the team a chance to win. I thought Rodgers would go for around 400 yards and 3 TD’s. He ended up with 297 and 3 TD’s. I think what they did is they caught Green Bay off guard. They came out with 6 DB’s and it just wasn’t something the Packers were expecting. To put it a different way, Chuck Pagano – yes, that guy – out-coached a guy who has won a Super Bowl. I don’t fault them too much for faltering in the 2nd half. They were worn down from spending nearly the entire 3rd quarter on the field after the offense went 3 and out because they went back to what wasn’t working.

Colts fans may be surprised at this, but our friends who root for the Packers are very similar to us. Every time something goes wrong, it’s fire Mike McCarthy, it’s fire Dom Capers (the DC), it’s fire Ted Thompson (the GM). This hasn’t been the best season for the Packers, but they are still a good football team. You never take any win in the NFL for granted, I don’t care if you beat the Patriots or you beat the Browns. They all count.

Q: It’s too easy to say “where have these Colts been?” Better question: How do they keep it up? – AJ via Twitter

As disappointed as I am to say this, they can’t necessarily go out and try to replicate the game plan against Green Bay. It’s going to be trickier for the defense. Defensively, you can’t come out and play 6 DB’s against everyone because once they see it on film, they’ll quickly figure out (or should) how to beat it. You don’t have a great defense and you’re not going to have a great defense, so the coaching staff has to figure out a way to keep throwing things at teams they haven’t seen or aren’t expecting. Much easier said than done.

Offensively, it should be easier. Again, the drives at the end of the first half and the one which sealed the win against Green Bay were things of beauty. They need to stick to this kind of style. Yes, teams will adjust to shorter drops and more shorter/intermediate routes in the passing game. THIS is when you hit them with the deep passes. Was it me or did Green Bay seem completely unprepared for the long pass to TY Hilton that sealed the game? Too often the Colts seem to kind of wander offensively, rather than continuing to do what is working. It seems obvious to me. Maybe this is why I’m watching at home.

Q: More specifically: What do they do to continue? And what might they do that makes them regress? – AJ via Twitter

I think I covered your first question in my last answer, so I’ll focus on the second one here.

The scary thing is, the coaching. Will the staff be able to build on what was probably their best game this season? Given the 4-5 record, I think it’s fair to be skeptical here. Even Phil Simms mentioned several times how Pagano had stressed the “first 5 minutes, last 5 minutes” stuff, and that worries me. I get what Chuck was trying to emphasize there, but how about some emphasis on playing 60 minutes? I have a feeling Pagano was coaching for his job against Green Bay. He succeeded, but are they going to go back to the ways that led them to a below .500 record?

It’s questioning whether the staff can build on this win which worries me about a regression.

Thanks for the questions.