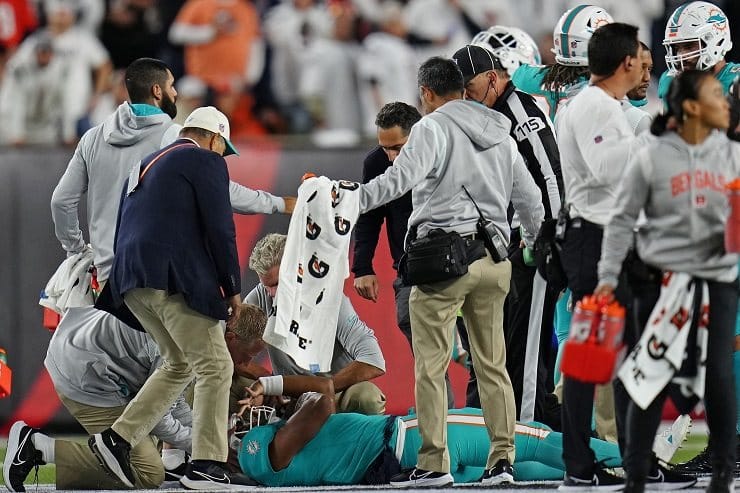 The league took action in 2018 and has reportedly seen a steady decrease in concussions since but has the NFL really tackled the issue?

A closer look at the data suggests that teams may be under reporting concussions in 2022.

Check out the highlights below.

Next, we’ll take a deep dive into concussions in the NFL by examining injury reports from the past few seasons.

What Has The NFL Done To Reduce Concussions?

The NFL Players’ Association has been sharing injury data as part of an ongoing effort to advance player health and safety measures.

Over the last five seasons, reported concussions are down more than 50 percent.

Some of that decrease has to do with initiatives from the NFLPA, including rule changes, stricter guidelines, and the adoption of top-performing helmets.

After rule changes were implemented in the 2018 season, reported concussions dropped more than 31 percent.

However, are better helmets and rule changes actually making a difference or is something else going on behind the scenes?

Since 2002, the NFL has made more than 50 rule changes intended to reduce risk for players.

The NFLPA has been adamant that concussions have been on the decline but a closer examination of the facts tells a different story.

In 2021, there were only 135 concussions in the expanded 17-game season for an average of 7.9 concussions per week, the lowest mark since the NFL started compiling data back in 2015.

In 2022, NFL teams only reported concussions for 10 different players in 3 weeks or 3.33 per week, which would be the lowest mark ever by a wide margin.

Yet, after Tagovailoa’s scary concussion on Thursday Night Football, 12 new players showed up on the Week 5 injury report with reported concussions, more than double the amount through the first three games combined.

Using official NFL.com injury reports, we’ll compare the reported concussions for Weeks 1 through 4 during the 2021 and 2022 regular season.

During the first three weeks of the 2022 NFL season, only 10 different players suffered reported concussions.

Overall, there were 13 instances where a player was listed with a concussion with some players forced to stay on the injury report for multiple weeks.

Below, we tallied the number of NFL players that suffered concussions listed on the injury report in Week 1 through Week 5.

Below, you’ll find a list of all of the reported concussions for each week during the 2022 NFL season.

In total, there were 25 instances of players listed with concussions on the injury report from Week 1 to Week 4.

Check out the breakdown below.

Are NFL Concussions Being Underreported In 2022?

After the Tagovailoa incident, it’s worth revisiting the data to review whether teams are simply failing to report concussions.

For instance, Tagovailoa’s first potential concussion this season was deemed a back injury, allowing him to return to the game after apparently losing motor function.

Check out the clip below.

Potentially life-altering factors on the line. Major step back for player safety pic.twitter.com/GODktj6uKS

In 2022, only 10 players suffered reported concussions during the first three weeks of the NFL season.

That number is down considerably from 2021 when 21 players suffered reported concussions during that same span.

Is it possible that this instance is revealing an underlying trend that is actually helping to skew the concussion data?

This is a disaster. Pray for Tua. Fire the medical staffs and coaches. I predicted this and I hate that I am right. Two concussions in 5 days can kill someone. This can end careers. How are we so stupid in 2022. pic.twitter.com/D8S8eEbgda

Following Tagovailoa’s injury on Thursday Night Football, 12 different players showed up on the NFL Week 5 injury report with reported concussions, more than double the amount in the first three games.

Not only did NFL teams seem to be underreporting concussions, but some of the data doesn’t seem to add up.

For example, practices generally feature less contact than games, yet concussions are up during practice since the NFL started taking player safety more seriously in 2018.

Yet, at the same time, concussions during NFL games are down more than 35 percent during that same span.

Meanwhile, concussions per week are down only 7.7 percent during the preseason compared to 34 percent in the regular season.

That begs the question, is the league’s concussion protocol too lenient or are NFL teams failing to report concussion-like symptoms during the regular season when it’s more important to keep players on the field?