What A Long Strange Trip It’s Been 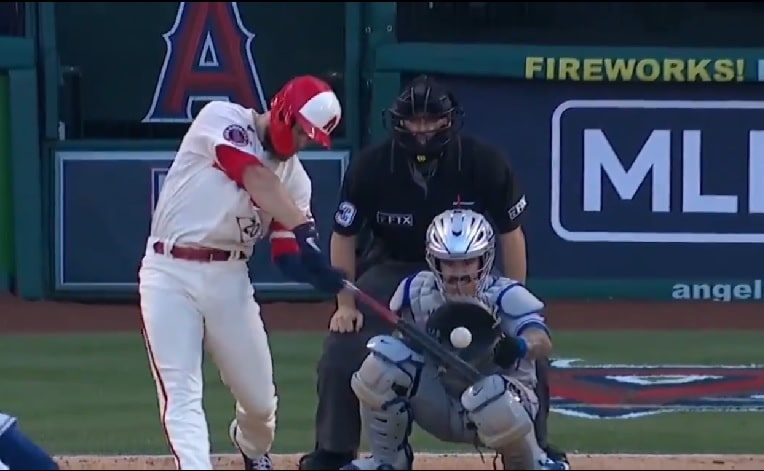 Well when the road trip started, Robinson Cano was flying out to end a Padres loss the the Cardinals. The road trip ended with Cano as a member of the El Paso Chihuahuas wearing a uniform with Spongebob all over it, so yeah this was a long road trip. But it ended with a 4-1 win over Los Angeles (AL) to take the series and end the trip at 5-5, which when you consider the way past road trips to Caliornia have gone (like last year), you’ll take 5-5 all day. 5-5 is a hell of a lot better than 4-6, and I think Buck understood that by the way he managed the end of the game.

Taijuan Walker started out very shaky, giving up a run on a Mike Trout single, and was lucky not to give up anything else as he got zero swings and misses in the inning. But Walker turned it around and dazzled for the next five innings, keeping Trout and Co. off the scoresheet for the rest of his time on the mound. Maybe Walker would have been in trouble if Shohei Ohtani had played, but he got the day off which surely must have hacked off ESPN as their Sunday Night Baseball commercial was basically a :30 clip of an original song written about Shohei with the commercial basically ending with “The Mets are playing too. Seven eastern on ESPN.”

The Mets were faced with lefty Patrick Sandoval, but they touched him up for a couple in six innings. Starling Marte made his return to the lineup count with an RBI double in the third to tie the game 1-1. Then you might have missed J.D. Davis’ homer in the 4th to make it 2-1 because it happened during ESPN’s long form Mike Trout interview on the bench. (But I have to say I was entertained by Trout saying that hosting his infamous fantasy football league was a problem because he used ESPN’s platform, and then stopping himself because he realized that he was on ESPN.

The Mets added another run in the 7th as Marte hustled home on a single by Pete Alonso. Alonso squibbed one to the traditional second base position with the second baseman on shift patrol, and Marte’s baseball senses and his fully healed leg combined to send him racing home with the insurance run. Then came the bullpen. Seth Lugo came in for a 1-2-3 7th, then got Luis Rengifo to ground out to start the 8th before walking Brandon Marsh to bring up Trout as the tying run. Buck Showalter, with the off day on Monday and the allure of a .500 California road trip calling, brought in Edwin Diaz to put the hammer down. Diaz smoked Trout with a fastball, then after a walk to Anthony Rendon (smart or maybe fortunate considering the way Rendon has worked over the Mets in the past) he threw a 102 mph fastball to send Jared Walsh packing and the Mets to the dugout to end the 8th.

It’s the beauty of Buck, right? There have been plenty of times that Buck has managed with 162 in mind. You have to do that as a manager. But knowing when to put the foot on the gas is a lost art for managers that get all of their instructions from the Ivy Leaguers. Buck knew that this was the one he wanted and needed. So he not only brought Diaz in for the 8th, but kept him on for the 9th after Pete Alonso gave the Mets some insurance. Remember that last week against the Dodgers Buck brought in Diaz for the 8th but sent in Lugo to close the game, and he didn’t. With Lugo already used, the decision to bring back Diaz for a second inning was easier.

Diaz started out a little wild to Matt Duffy, going to 3-0 on him (although Ball 3 sure as hell looked like Strike 1 to me.) But Diaz came back to strike him out and set the Angels down 1-2-3 to end the game. The Mets are now 40-22, an amazing 21-14 on the road, and 5-5 in my subset of 22 games which started against the Dodgers and will end at the end of the month. Remember, I told you that if that stretch ended at 11-11, they’d be home. That means that they’d have to go 6-6 against the Brewers, Astros and Marlins to reach my mark of 11-11 and head into July at 46-28. With the Brewers slumping and the Marlins being largely the Marlins (except for Sandy Alcantara who I’m not sure we’re going to touch in the next 20 years), 6-6 should be the very worst they do. Sure, the Braves are making things complicated with their 11 game winning streak against the Rockies, Athletics and Pirates with the Nationals and Cubs ahead of them, but the Mets are getting through the tough stretch in good shape, and getting healthy. And before you start panicking remember this:

When you wake up on Monday and you realize that you have to go back to work, remember that Robinson Cano is still an El Paso Chihuahua.

1. The Tennessee Volunteers baseball team.
2. They have a coach that threw a bat at the entire Auburn team.
3. They had an outfielder that flipped off civilization after hitting a home run.
4. And this season they had more players/coaches ejected than the rest of the SEC combined.
5. A bit of karma maybe that they got massively upset by Notre Dame to knock them out of the CWS on Sunday?