What is going on with the Boston Red Sox? 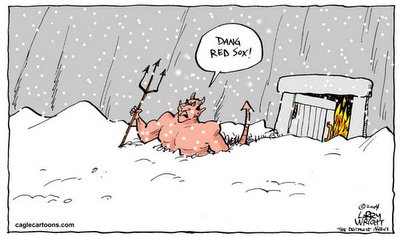 OK, we are about one month for the reporting date for the pitchers and catchers of the Red Sox and yet we still have no one to play centerfield and shortstop. The Sox however have filled the need at first base with the signing of JT Snow. Snow brings the Sox his Gold Glove 1b skills and a pretty decent bat. A potential infield of Snow at 1b, Loretta at 2nd, Cora? at SS and Lowell at 3b is a scary thought. We can only hope that Lowell finds the form that he once showed in Florida, otherwises it’s going to be a long season of watching the starting pitchers try to shut down the other teams.

According to the Red Sox website, they have stepped up their search for a centerfielder. Names being thrown around include Coco Crisp and Jeremy Reed. I have seen Coco play while he was in the minor leagues here in New Haven. I can tell you that he will definitely bring speed to the Sox but I don’t see him as a leadoff hitter. Especially not in front of guys like Manny and Big Papi. As far as the shortstop position goes, the Sox right now are thinking of Alex Cora to play their everyday. Personally, I think this is a mistake but then again I am just the couch GM. From what I know and have seen of Cora, he makes a better utility guy then an everyday player.

I read somewhere while I was in parts unknown, that if Theo were the GM still when the Damon signing was announced, that he probably wouldn’t have kept him either. He stated that the Red Sox pretty much stick to the value that they assign to the player. If my mind serves me correctly, and for those who know me sometimes it doesn’t, Theo also stated he might have handled the negotiations a little differently.

Manny is still being Manny by changing his mind and now wants to stay in Boston. Stay tuned on that one though as he may change his mind like the seasons change here in New England.

Big Papi is looking for a contract extension from the Sox. One sentence will answer that one. GIVE HIM WHATEVER HE WANTS!!!

Word from Arizona is that Curt Schilling and Keith Foulke are rehabbing aggressively and look to be ready for 2006. Thank god because we are going to need them. Especially Foulke. Hopefully he returns to his old form and saves about 40 games this year.

Will 2006 be the year the Sox return to the World Series? Only time will tell.