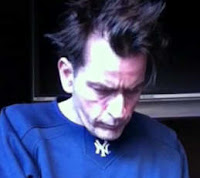 I’ve been squawking a lot this week on Facebook about the whole Charlie Sheen drama. But now I am moving my gripes about Sheen to Subway Squawkers, because he has gone too far — wearing a New York Yankees shirt while spewing bile in one of his crazy videos. Enough! When is somebody going to stop the madness already?

We know that MLB Advanced Media will crack down on fans like those who ran the “Cubscast” podcast for using a team’s name, or try to shut down pretty much anything they don’t like that a fan writes online. Maybe MLB should be concerned that Sheen, who has been on TV about a hundred times over the past 10 days, is wearing baseball gear in most of his bizarre rants. I’ve seen him wearing Cleveland Indians and San Francisco Giants hats, which is one thing, but when he sullies the interlocking NY by wearing it, I have had it! C’mon, Bud Selig, ban him from wearing MLB gear. Now!

I’m not exactly a fan of Sheen these days, and the drug abuse is the least of it. Heck, I watch “Intervention” every week, and there are a lot of sympathetic addicts on the show that I root for to get clean. But whether he is sober or not, Sheen is just too hateful and arrogant to be sympathetic. The thing is, his career was based on being a likeable partier. But he’s shown himself to be extremely unlikeable these days.

And I think it’s disgusting the way the media whitewashes the fact that he has a long track record of beating up women. Sorry, Piers Morgan, it doesn’t make Sheen a “rock star” that he reportedly threatened to cut off his ex-wife’s head, put it in a box, and mail it to her mother. Not to mention that Sheen had custody of his kids during some of his meltdowns this week, until the state finally stepped in. And what was NBC and ABC thinking in showing those poor young kids on TV?

And how about all of Sheen’s “Apocalypse Now” references, comparing himself to Colonel Kurtz? You may remember that Kurtz, played by Marlon Brando, was killed by Martin Sheen, Charlie’s father, in the film. What is Sheen saying here? That he wants his father to put him out of his misery? It’s all too much. I haven’t heard so many weird ramblings since I read Dutch Schultz’s deathbed speech!

At any rate, if MLB can be so diligent at protecting its image, and its logos, can’t they stop Sheen from wearing baseball attire? Who wants to see baseball represented by such a vile human being?

You know who else needs to gripe? The tigers of the world. It’s not enough that they’re being slaughtered, but Sheen sez he has tiger blood! What did they do to deserve such an insult?