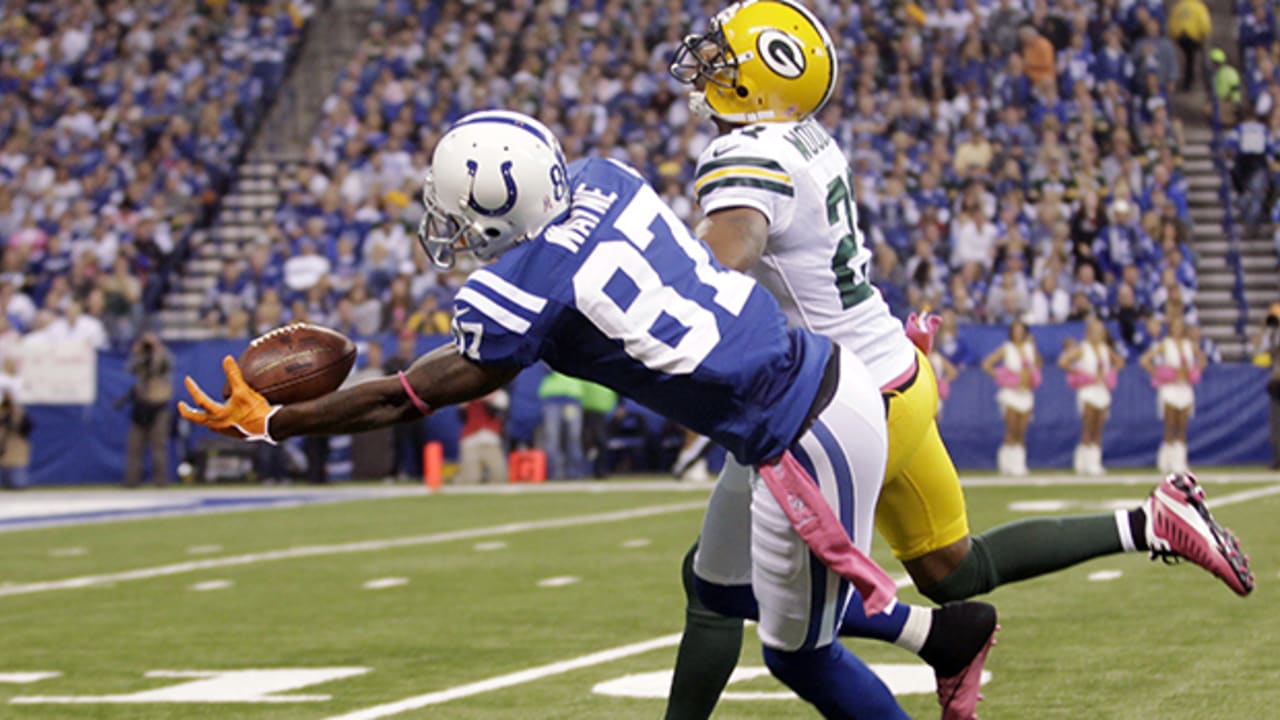 Who:  The Green Bay Packers vs the Indianapolis Colts

1. World Peace or something

This is the fifth meeting between the two teams since the NFL went to its current scheduling format in 2002, and the first four games were all great:

2004: Peyton Manning, on his way to a record setting year, throws 5 TD’s. Brett Favre throws 4 of his own. After 69 points in the first 47 minutes, the 4th quarter is mostly quiet until Edgerrin James seals a 45-31 win with a 1 yard run late in the game.

2008: Remember when I said all four games were great? Yeah, I lied. Normally I can remember something about a game, but even looking at the box score, I remember nothing about this one. Manning threw a 99 yard pick 6, and Green Bay won easily, 34-14. 2008 was a weird year, with Manning starting off slow due to (depending upon who you listened to) multiple knee surgeries. This loss dropped them to 3-3, but they went 9-1 the rest of the way.

2012: The Reggie Wayne Game. In the first game following Charles Pagano’s leukemia diagnosis, the 1-2 Colts rallied from down 21-3 at the half to pull off an incredible 30-27 win. The defense did its part in the 2nd half, but let’s be real here: Reggie Wayne won this game. 13 catches – 11 of which went for 1st downs – for 212 yards. You don’t see a lot of football games where one player wills his team to victory, but Reggie did it. One of my favorite wins ever.

2016: Colts came in at 3-5 after a yucky loss to the Chiefs. There were few reasons to feel optimistic against the Packers, who were just 4-3 but on paper a far superior team. I think we were all expecting a blowout, but then Jordan Todman returned the opening kick for a score, and next thing you know, the Colts went in at halftime up 24-10. Green Bay would tack on a couple of TD’s in the 4th quarter, but the Colts prevailed 31-26 in a game that wasn’t as close as the score indicates. The secret? Charles Pagano’s defense came out in a 6 DB look, which totally caught Green Bay off guard. By the time they figured it out, the game was too far gone. One of the best coaching jobs Charles did in Indy. They were so few and far between….

Anyway, enough about the past…

Green Bay strikes first near the end of the first quarter on a 2 yard run by Aaron Jones. The drive began at the Packer 44 after Jonathan Taylor was stuffed on a 4th and 1 run try. The Colts follow with a 3 and out, and the rout is on. Not really, maybe, but going up tempo, the Packers reel off an 8 play drive, culminating in a 31 yard TD by Davante Adams.

It isn’t until midway through the 2nd quarter before the Colts are finally able to sustain a drive, but even it disappoints. After a 1st and goal from the 6, they end up settling for a 24 yard FG by Hot Rod. The lowlight of the sequence comes on 2nd down. Nyheim Hines takes the snap and pitches it to Zach Pascal, who attempts to hit Rivers on a fade route but instead fires it into the 2nd level.

The joy only lasts about a minute and a half, though, because Green Bay marches right down the field again. Adams catches his 2nd TD, this one for 31 yards. It’s 21-3, and Aaron Rodgers is prancing around like he just owned his brother Jordan with a “SIKE!” joke about getting the family together for the holidays.

As Rodgers makes his way to the locker room at halftime, he’s hit with a beer from the stands. He looks up to find the perp when all of a sudden…

The former Pacer, in town on business, had decided to check out the game, and he’s none too pleased with Rodgers’ prancing. In a flash he leaps over the railing, landing a haymaker or two before being restrained by seven IMPD officers.

Artest is arrested and charged with battery and trespassing, but days later the charges are dropped by Marion County Prosecutor Todd Mears, who releases a statement saying: “In Marion County we pride ourselves on seeking justice and fairness, but you know what? The little SOB deserved it.”

Rodgers’ former girlfriend Danica Patrick takes to Instagram and offers Artest a date. Artest declines, citing his religion and his belief in “Schactenwreckinson,” which is 9th century Gaelic for “man who date woman who wreck every car, end up hitchhiking.”

The 2nd half is a different story.

An interception by The Squirrel gives the Colts great field position, and they take advantage this time. The 6 play drive ends with an 8 yard TD catch by Mo Alie-Cox. It’s 21-10.

Rodgers, shaky since halftime, gets the Green Bay offense moving again, but the drive stalls at the Colt 34. They bring out Mason Crosby for the 52 yard attempt, but it’s no good, and the score remains 21-13.

Helped by the resulting great field position, the Colts march right down the field again. Lined up in a true wishbone formation, Rivers keeps it himself and takes it in from 3 yards out. Replay shows he’s actually carried the last 2 3/4 yards by Quenton Nelson, but we’re not here to hate. The Colts go for two, but Marcus Johnson is unable to haul in the pass. Quarter ends with the Colts down 21-19.

Halfway through the 4th, another promising drive for the Colts stalls, and Hot Rod is true from 28 out. After scratching and clawing to get back into the game, the Colts finally have their first lead, 22-21.

Both teams exchange punts. On the first play, Jones busts one for 41 yards to the Colt 8. On the second play, a clear headed Rodgers hits Marquez Valdes-Scantling with an 8 yard strike. They go for two and fail.

Rivers, throwing darts after a shaky first half, isn’t daunted. Five times he targets Michael Pittman, and four times Pittman comes through, including two 3rd and long conversions. With just 39 seconds left, Rivers takes a quick drop and fires it to Pittman who reaches…and…I’m not sure he got there….touchdown! Incredible play by Pittman.

Jordan Wilkins punches in the 2 point conversion try, and the Colts lead 30-27 with 35 seconds remaining.

Green Bay isn’t finished, though. Rodgers hits Jones twice, then Adams, bringing the ball to the Colt 33. With 8 seconds left and no timeouts, Green Bay sends out Crosby to tie it from 51 yards out. The kick is up and…Vandershank’d.

C is someone I met on social media who became a dear, dear friend. If it sounds like I’m using past tense, it’s because I am. C left this shitty world way too early in February of 2019. I miss my friend.

She contributed the guest spot for this post the last time our teams played. It was my intention to share her words again, but guess what? Because our overlords change shit around, the post no longer exists in my archives. Thanks, guys. No, really.

Like many of us, the Boss got caught up watching IU’s valiant effort against Ohio State on Saturday.

Also like many, when I saw this tweet I thought the man was talking about disgraced former Subway spokesman Jared Fogle. He wasn’t, of course. 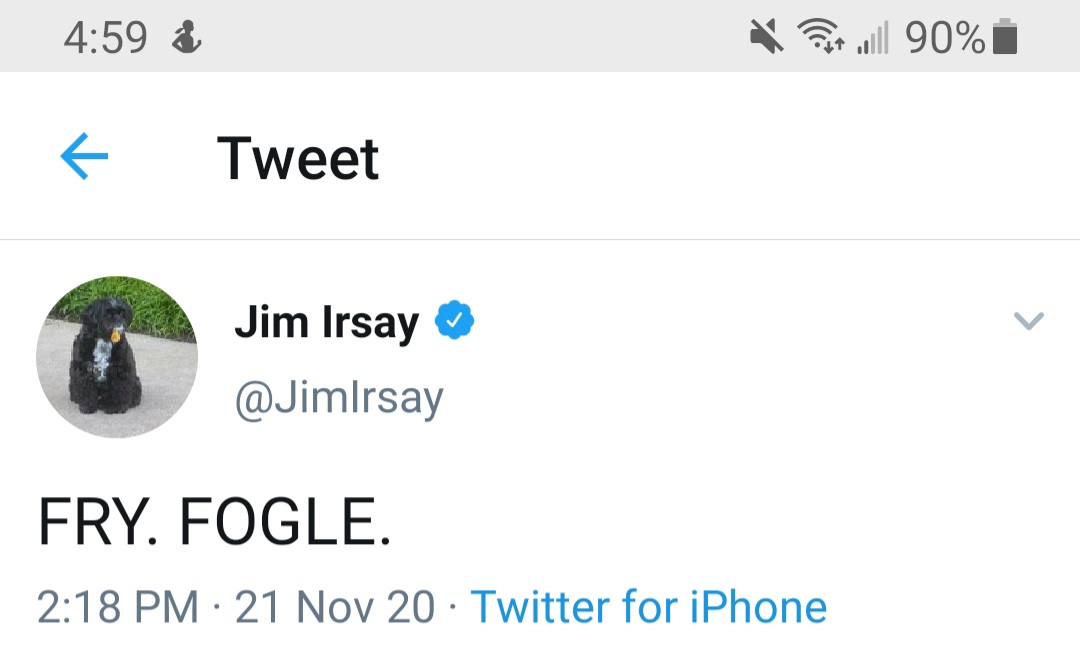