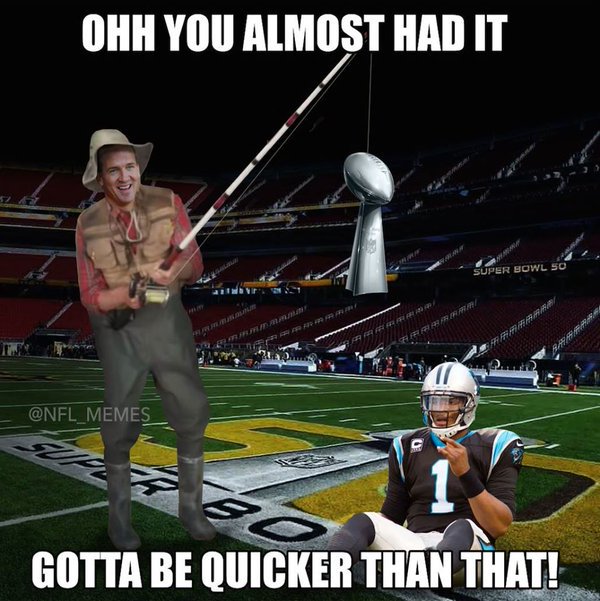 Who:  The Carolina Panthers vs. the crappy Indianapolis Colts.

When:  1 PM Eastern, Sunday, December 22nd. TV: FOX. Dick Stockton and Mark Schlereth are on the call. Yippee. I can hardly contain my excitement. Stockton’s had a distinguished career, having called the World Series, NBA Finals, NCAA Men’s Finals, a Super Bowl, and the Olympics. Schlereth was a pretty good player for Washington and Denver. As a broadcaster, he was a good NFL player.

No, no, no, not that guy. Did you know the “thumbs up” sign which means something’s ok or good in our country means “up yours” in places like Iran? I’m not kidding.

While we’re talking about luck, let’s talk about gambling. I’m not a gambler in the sense where I will go to a casino or place bets on games, but I do enjoy an NCAA tournament pool, or one of those square pools where you get numbers and hope you come up roses. When the stupid Patriots beat Seattle in the game where Pete Carroll didn’t run the damn ball, Seattle came through big for me, and I won $500 in our square pool. I was sitting pretty in the past Super Bowl as well, with a winner 3, loser 6. The Rams took over with about a minute left, trailing 13-3. You need two scores here, so you take the FG first if you can. Out trots Greg Zuerlein, Greg The Leg, Mr. Clutch, the guy who hit multiple 50-yarders in the NFCCG win over the Saints. He’s trying a relatively easy kick. He misses. The Rams lose 13-3, and I miss out on $400. I was pissed, and I’ve irrationally hated Greg Zuerlein since. It should be noted the Rams odds of making it back to the post season stand at a minuscule 4%. NEVER mess with my winning, Greg.

Remember a couple of weeks ago when I said the Bucs were uninspiring? Yeah, Carolina fits the bill as well. Ugly uniforms, the mascot looks stupid and has a stupid name, the list goes on. No one cares about this team. I realize the NFL has a scheduling formula and sometimes you find yourself in these spots, but damn. Can’t we skip the Bucs, Panthers, Titans, and Jags for like 15 years? This is disgusting.

Look, I have no idea what the hell is going to happen in this game.

It’s halftime. Jim Irsay is reciting the classic “A visit from St. Nicholas” (aka ‘Twas the night before Christmas) as Blue hands out gifts to local families in need…

Then down on the field there arose such a clatter

Fans sprang from their seats to see what was the matter

When what to their wondering eyes did appear…

But a disheveled looking man with a full (darkly colored) beard, and wearing a blue Santa suit.

Security soon converges on the man, but with a twinkle of his eye, the man eludes them and races off, never to be seen again.

Marlon Mack may have a big day, or he may not. Will Grier is making his first NFL start. He may go for 397 and 4 scores, or he may not. Zach Pascal may be open downfield multiple times and be missed by his QB, or…yeah, that’s going to happen.

The holiday season brings me back to one of my favorite Score More joints. This is from 2016. Read it. After you finish reading this article, of course.

For the 8 or so of you who actually read this article, you know I almost always have a guest or two who chimes in with their thoughts. I didn’t include it this time because, to be honest, I am not about to risk the integrity of this fine article by asking friends about a game against Carolina. I’m better than this.