Why the Cougs can win, plus other picks 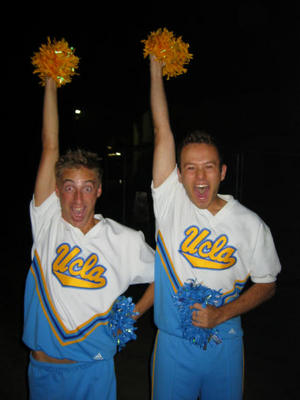 Ask yourself, are you REALLY afraid of the powder-blue and gold?

Seriously, reasons why the Cougs can win:

1) Jerome Harrison. Nearly 250 yards rushing last year at the Rose Bowl. UCLA has been weak against the run all year long. On paper, it’s by far the biggest mismatch you can hope for in our favor.

2) Improved efficiency from the QB. I have a hunch that they won’t ask the QB (Brink or Swogger) to throw more than 25 times, total, and just take care of the football by running it 45 times, controlling the clock and all the while keeping your young defense off the damn field! Forget Jason Hill, if he can’t play and it sounds pretty bleak, they have to figure it out, get the tight ends more involved, hope that Bumpus and Prater and Jordan will do what they are supposed to and catch the ball, and let’s go. Let’s own them on the ground and in time of possession. Let’s do to them what Stanford did to us. Keeping their talented, experienced offense off the field is the biggest key to this whole thing.

3) Letdown-City – UCLA just won their biggest game in the Dorrell era, by far, beating Cal in a comeback, emotional game. I believe they will sleep walk through the whole first half before they “wake up”. We need to take advantage of what is bound to be a flat, uninspired effort early on. Even better, as mentioned above, take advantage of that edge you have in the running game and just pound the ball the entire first half, keeping that O off the field and out of their rhythm! Remember, these are kids, and UCLA has been getting a ton of positive pub about how they could challenge USC, etc. This game is a serious landmine for them.

4) UCLA hasn’t won at Pullman since 1993, when JJ Stokes went wild vs. an undermanned Cougs defense. UCLA HATES coming to Pullman, even the quotes this week of racial taunts show they hate Pullman. Tight games, blowouts, it doesn’t matter, the Cougs have done a number up here on these guys.

Oh yeah, and UCLA hasn’t even had to leave the state of California for a game this year, and we’re already to mid-October!?! Their only road game was at San Diego State, hardly a tough venue against a weak team. This is up in the great northwest, where it’ll be chilly as the sun sets by halftime, in a place they publicly admit to hating. Heck, they will not be up for the Cougs anyway. For proof of how they perform when they don’t give a damn this year, look back at their game vs. UW. They were dominated on the ground by a below-average rushing team, and needed a 4th-down conversion and a last-minute TD drive to beat them on their home turf! UCLA has historically shown they are famous for fast starts and amazing letdowns to their seasons, only to fade once they hit adversity in the middle of the season. We have lost our last two games and looked bad doing it, so you know they will come in thinking blowout.

5) Finally, backs against the wall, circle the wagons, do or die, win one for the gipper, ABC TV, you name it, this is a BIG, BIG GAME for our Cougs. Certainly the biggest since the 2003 game vs. Oregon in the Doba era. Old Bill said it best, 6 quarters ago we were a pretty damn good team. It’s funny how things can change in a game and a half! Reading Pflu’s comments, it sounds like we have practiced extremely well and you know they are dying to get that bad taste out of their mouth.