Why the Timberwolves should target Joe Ingles 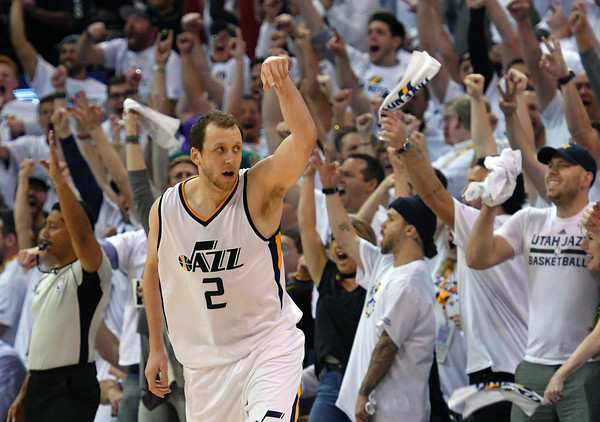 Unless you are a Utah Jazz fan or an avid follower of the Australian basketball landscape, you may be seeing small forward Joe Ingles for the first time in the 2017 NBA Playoffs. Ingles basketball resume consists of representing the Australian national team in the Olympics and the FIBA World Championship, as well as winning a EuroLeague championship for Israeli powerhouse Maccabi Tel Aviv under former Cleveland Cavalier head coach David Blatt. Ingles now finds himself in his third year in the NBA playing significant playoff minutes for the Utah Jazz.

Ingles is in the final year of his contract and set to enter the Summer as a restricted free agent. While Ingles isn’t a big name in free agency this offseason, he is exactly the type of player the Timberwolves should be looking to acquire. Below are Ingles statistical totals for the 2016-2017 regular season.

Not impressive, but the real value with Ingles from the Timberwolves perspective is more about filling desperate needs than his overall talent.

The most obvious area where Ingles can help the Timberwolves is from the three point line. Ingles shot a magnificent 44.1% beyond the arc in the regular season. He would immediately be the most consistent jump shooter on the roster as no player on the Timberwolves eclipsed 40 percent from three this season. Shooting guard Zach LaVine led the team with a 38.7 three point percentage and the Timberwolves finished dead last in made three pointers per game.

Identified by the nickname “Slow Mo Joe”, Ingles ins’t recognized for his athleticism. However, despite his lack of quickness he is a surprisingly effective pick and roll player.

Ingles is unpredictable when running the pick and roll as he uses his body to create space and makes the right play based on how the opposing team is defending. In the video below you routinely see Ingles passing ability out of the pick and roll finding open teammates for easy shots.

Offense is not the only area of the floor in which Ingles can help the Timberwolves. He shined on defense against the Los Angeles Clippers in the first round of the playoffs. Rarely did Ingles go under the screen on pick and rolls. He matched the ball handler stride-for-stride fighting through punishing picks.

Ingles also did a tremendous job defending shooting guard J.J. Reddick. Below are Ingles defensive highlights from that series. Notice Ingles defending the pick and roll, fighting through off-ball screens and being an all-around pest on the defensive end of the floor, making life difficult for Reddick and the rest of the Clippers.

The numbers tell the same story the tape does. The table below shows Reddick’s regular season statistics compared to his playoff statistics where Ingles defended him much of the time he was on the floor.

The shooting ability and defense are both reasons why Ingles makes sense on the Timberwolves, but the cost it would take the team to acquire him may be the icing on the cake. Ingles current contract is a two year / $4.3 million deal which is a bargain considering the recent increases in the NBA salary cap. Ingles also stands at 6’8″ which gives head coach Tom Thibodeau options as he could line him up at the small forward position or as a small ball four.

The price for Ingles will almost certainly go up, but his underwhelming statistical totals could dampen his value on the market. A positive for the Timberwolves as he would be an affordable difference maker by today’s standards. There is a chance the Jazz match his offer sheet if the Timberwolves extend Ingles a contract, but it is a move the Timberwolves should make nonetheless. Ingles is crafty left-handed shooter and an ideal rotational player for the Timberwolves considering his skill set and price.

Logan Metzger is a contributor to HowlinTwolf.com. Follow him on Twitter:@loganmetzger33