Will Kevin Durant reunite with the Warriors? Trade odds drop 10% 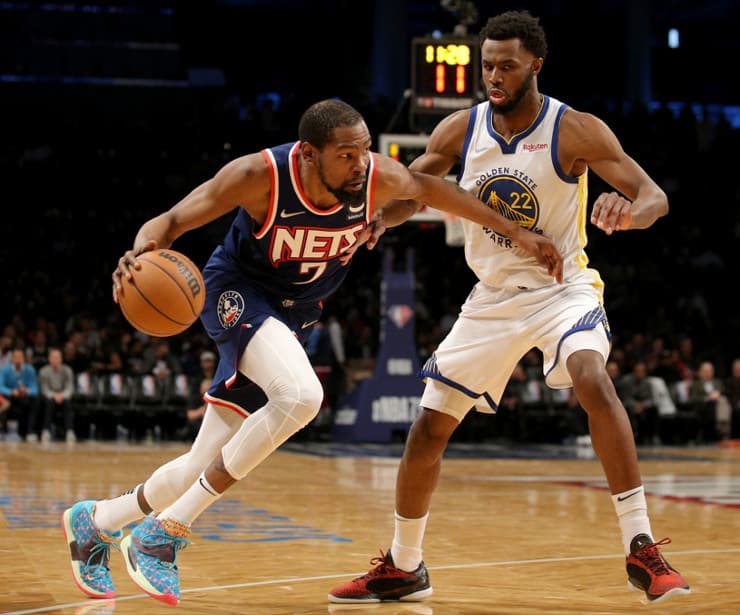 Kevin Durant has an opportunity to reunite with the Warriors, his former team, but the odds of this particular trade occurring have dropped 10% since Sunday. According to BetOnline oddsmakers, the Warriors have +1200 odds of trading for Durant. In 2019, the forward signed a four-year, $164.25 million contract with the Warriors as part of a sign-and-trade deal with the Nets.

Additionally, Durant averaged 29.9 points, 7.4 rebounds and 6.4 assists per game in the 2021-22 season. The 15-year veteran shot 51.8% from the floor and 38.3% from downtown as well. The forward turns 34 in September. As of the Fourth of July, the Pelicans, Warriors and Lakers each possess a 7.7% implied chance of trading for Durant this offseason. Kevin Durant next team odds are below.

A Kevin Durant trade to the Warriors is “highly unlikely”

According to Marcus Thompson II of The Athletic, a Kevin Durant reunion with the Warriors is highly unlikely. Similar to every other team, the Warriors are interested in trading for the two-time Finals MVP. But do they need him? Nah, considering the team just won its fourth championship in eight years. Perhaps trading for Durant would help the Warriors reclaim their ‘superteam’ status again.

During the 2022 NBA Playoffs, the two-time champion averaged 26.3 points, 5.8 rebounds and 6.3 assists in the Nets’ first-round series loss against the Celtics.

The Warriors would have to surrender quite a bit for Durant

On ESPN Radio, Marcus Spears said to listeners: “The one team I’m telling you guys to keep an eye on is the Golden State Warriors. Golden State could have the best package for both parties: Jordan Poole, Jonathan Kuminga, Andrew Wiggins and James Wiseman. What the Nets want is a young All-Star and want perhaps a future All-Star.”

Furthermore, unlike other teams seeking to trade for Durant, the Warriors wouldn’t have to destroy their roster to make it happen. Even if Warriors G.M. Bob Myers agrees to trade Poole, Kuminga, Wiggins and Wiseman to the Nets, the team will still have Kevon Looney, Draymond Green, Stephen Curry and Klay Thompson. Not to mention, the Warriors signed Donte DiVincenzo during free agency to replace Gary Payton II.

And since Durant is one of the best players in the NBA today, one could argue that it would all be worth it. Durant ranked eighth in scoring and 24th in rebounding last season. The Warriors are one of the few teams that could still remain a title contender after surrendering a king’s ransom for the veteran. Other articles related to Kevin Durant are on the main page.