Will The Raptors Overcome Their Playoff Hoodoo? 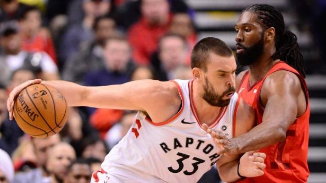 It’s fair to say that when it comes to the playoffs, the Raptors aren’t exactly worldbeaters. In fact, they’re the very definition of underachievers.

The side are currently second in the Eastern Conference and well placed to star in the postseason, but it’s hard for fans to truly believe given history. And history can be difficult to get over.

However, curses and hoodoos have to be broken at some point. Even the Cubs eventually managed the World Series. So what’s stopping 2019 being the Raptors year?

The side certainly continue to improve but fall when the pressure gets insurmountable. It’s a feeling they know all too well but one they’ll be desperate to avoid this time around.

The bookmakers are certainly expecting a new Raptors in the playoffs. Most Canadian and USA betting sites have them third favourite for the NBA Championship and joint favourite to win the Eastern Conference alongside the Milwaukee Bucks. And with good reason too.

This Raptors side is a completely different beast to the one of last year, and while the nucleus of the squad remains the same, key additions have the experience to carry them over the line.

Marc Gasol has a wealth of experience in the playoffs to help keep the side calm and playing the same dynamic and together play they have been throughout the entire regular season. He’s fitted well into the side and freed up the likes of Kyle Lowry and Kawhi Leonard around him.

Leonard has certainly benefited and has become a real star for the Raptors. In the Small Forward, they have a player averaging 27-points per game and one that is well and truly Championship standard.

Should he and the Raptors reach the Finals it could also be key in keeping the star in Toronto, with a move to LA mooted.

Masai Ujiri has brought in a number of players who are tried, tested and able to perform under pressure in the playoffs, with Danny Green also having the ability to remain calm in the heat of the moment like Gasol.

The former Spurs man is a leader on the court and has been touted as the real rock of the side by a number of media outlets recently.

Which can’t be denied. He’s been Mr Consistent throughout the season and has got on with his job with very little fuss. Even coach Nick Nurse has heaped praise on the 31-year-old.

“Danny just kind of does his thing and his thing is to play team basketball, hang out and take shots when they come to him and he’ll make a big one late.”

That composure late on is where the Raptors have lost games previously, and with him averaging more minutes that anyone other than Pascal Siakam and Serge Ibaka, he could prove the final piece in the jigsaw for the Raptors to go all the way.

You get the impression things will be different this year. Could they be?