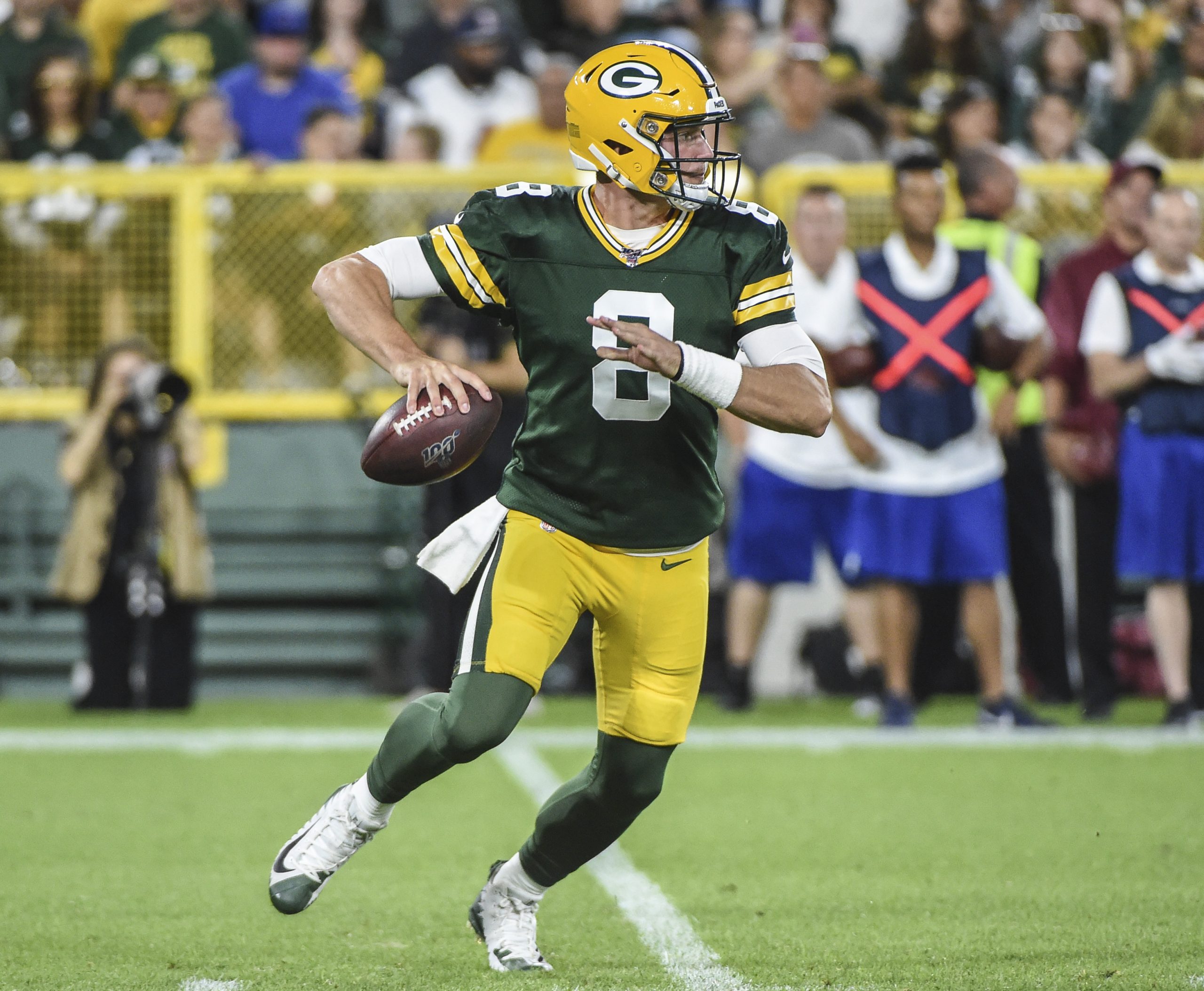 The Green Bay Packers created a lot of intrigue when they traded up to select Jordan Love in this year’s NFL Draft. Nearly every scout out there describes Love as a talented young signal caller with a lot of potential but also as a player who will need a few years to develop before he’s ready to play in the NFL.

Love will certainly make the Packers roster and so will Aaron Rodgers, of course. But the question remains whether the Packers will keep two quarterbacks on the active roster or three. So, what happens to 2019 backup Tim Boyle?

In college, Boyle spent three seasons mostly as a backup at Connecticut and then transferred to Eastern Kentucky where he started as a senior. His college statistics were not outstanding. He completed 55.5 percent of his passes while throwing for 12 touchdowns and 26 interceptions. Still, his strong arm garnered him attention from NFL scouts and got him an invitation to training camp from several teams.

The Packers signed Boyle as an undrafted free agent in 2018 and made the club as the third quarterback after a strong preseason. He did not throw a pass in his rookie campaign, in fact, he did not see the field at all.

In 2019, Boyle became the Packers primary backup after enjoying another strong preseason. He led the NFL in passer rating during the preseason with 112.9 after completing 34-of-57 of his passes for 356 yards. He threw six touchdowns without tossing an interception.

During the regular season, Boyle appeared in three games for the Packers, all of them in mop up duty after the Pack was either ahead or behind by large margins.

Boyle threw four passes, completing three of them for 15 yards, giving him an 80.2 quarterback rating. All his passes came in the Packers blowout regular-season loss to the 49ers.

The Packers kept only two quarterbacks on the active roster last season, Rodgers and Boyle. They had Manny Wilkins on the practice squad in case of emergency.

The Packers are more likely to keep three quarterbacks on their roster this year, however. Rodgers will be 37 before the season is over. He missed nine games in 2017 due to a broken collarbone and then played all of 2018 with an injured knee suffered in the Pack’s Week 1 comeback victory over the Bears.

Most scouts believe Love is not ready to take over in the event Rodgers goes down. Love has already missed out on OTAs and minicamp, which were not held in person due to the Covid-19 pandemic. He took part in the team’s virtual OTAs, but that is not the same as being on the field and getting timing with your receivers.

Scouts indicated that Love needs time to correct some issues with reading defenses and improving his footwork. Not being able to be in camp with his coaches in person will only slow down his development. It is unlikely the Packers will want to send out Love as the starter before he is ready. That could erode his confidence and turn the fan base against him early.

The coaching staff is aware that missing OTAs and minicamps will slow Love’s development. “I think Aaron [Rodgers] and Tim [Boyle] are at a great place and will be at a great place,” quarterbacks coach Luke Getsy told reporters during a conference call last week. “But the two young guys, yeah, it’s going to be a demanding training camp for them because they don’t even know exactly what the drill is that we’re going to do yet. They’ve only seen a video of it. They don’t know what it feels like for any of that stuff. They haven’t had to say a cadence or say a play in the huddle with the team. I think all those firsts are what you really enjoy about rookie minicamps and OTAs.”

The question is whether Boyle is ready to take over if Rodgers is unable to play. Head coach Matt LaFleur certainly felt Boyle was capable enough last year when he cut DeShone Kizer prior to the start of the season.

Quarterbacks coach Luke Getsy was impressed with the way Boyle handled himself as the backup in 2019. “Tim, he became a veteran. He became a pro last year,” Getsy added. “I thought when the competition for the backup role ended, he opened up tremendously and grew so much. … The mental part of his game is at a whole other level now. We’re so lucky to have him, especially at a time like this when we aren’t able to be together as much as we usually are.”

The decision may ultimately come down to four major factors:

First, how well does Boyle play in training camp and the preseason. If Boyle continues to show progress and looks like he could step in and play well if called upon for an extended time, he will go a long way towards staying on the roster this season.

Second, how does Love play in training camp and in the preseason. If Love is clearly not ready to serve as the backup, that only increases Boyle’s chances of remaining on the roster this season.

Third, do the Packers have room on the roster for three quarterbacks. Last year they kept four tight ends, which is likely to happen again. Two years ago, the Pack had seven wide receivers on the active roster. If the Packers need the extra roster spot, Boyle’s position may be in jeopardy.

Finally, injuries always play a part in these decisions. An injury to any of the quarterbacks obviously changes the equation immediately. Also, injuries at other positions could change the way the Packers have to put their roster together for the start of the 2020 season.

In the end, with the loss of offseason workouts and Love’s rawness, keeping Boyle around would make a lot of sense for the Packers. The question remains whether they have room and a willingness to make that happen.