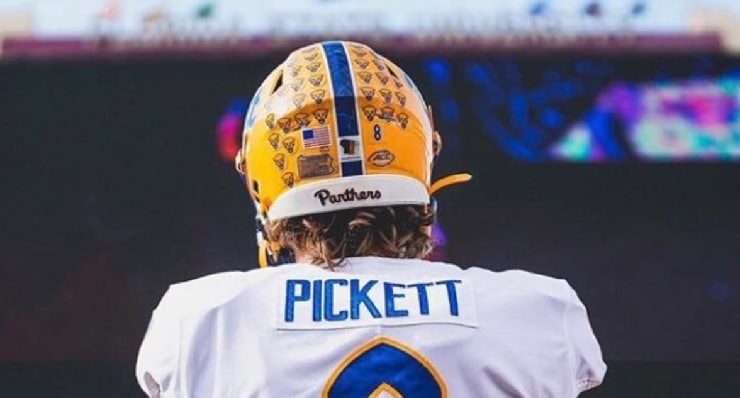 Kenny Pickett is the odds-on favorite to win the NFL Offensive Rookie of the Year award.

Pickett was the first QB off the board in the NFL draft, going number 20 in the first round. The Steelers were in search of a QB and drafted him to replace future Hall of Famer, Ben Roethlisberger.

As a senior, Pickett finished off his college career by emerging as a Heisman Memorial Trophy Finalist in 2021.

Other NFL Offensive Rookie of the Year Contenders

While Pickett is the betting favorite for NFL Rookie of the Year, there are a few players not too far behind.

Breece Hall, Chris Olave, Skyy Moore, and James Cook are all tied for second place with a 10% chance of winning NFL Offensive Rookie of the Year.

Below, we’ll break down other players that have a chance to win the NFL ORTY award.

Hall was the first running back drafted after going early in Round 2 to the New York Jets.

He has impressed early in camp and is already atop the Jets’ depth chart at running back, ahead of Michael Carter. He will be busy as a rusher and receiver for the Jets this season.

With a lot of touches projected to come his way, Hall could emerge as the best bet to win the NFL Rookie of the Year Award

Olave was drafted 11th overall by the New Orleans Saints and will be competing for targets with Jarvis Landry and Michael Thomas.

If Thomas is not healthy by the start of the season, Olave will see more targets his way early on. Alvin Kamara may also face a suspension to start the season, which could make the Saints’ rookie receiver a go-to option from the jump.

Olave may be a busy WR to start the season, depending on the status of Kamara and Thomas, making him an early-season NFL Rookie of the Year contender.

Moore was taken with the 22nd pick in the second round but ended up in a great landing spot with the Kansas City Chiefs.

The Chiefs traded No. 1 wide receiver Tyreek Hill during the offseason, opening up a whopping 159 targets on offense. However, Moore could struggle to see targets early, as he will be competing with Kelce, Juju Smith-Schuster, and Marquez Valdes-Scantling.

Playing with Mahomes, Moore’s ceiling is high but it could take time for him to see a more significant role in his rookie year.

James Cook, Dalvin Cook’s brother, is another second-round pick that could make an immediate impact in the NFL.

Cook was drafted with the 31st pick in the second round. He will mostly be the third-down back and could also see snaps as a receiver to start the year.

Early on, it will take an injury to Devin Singletary for Cook to become the starter.

But he will have a chance to supplant Singletary as the starter later in the season, if he impresses with his opportunities.

Despite being the odds-on favorite, Pickett is not a good pick to win the NFL Offensive Rookie of the Year award.

All reports indicate that he will not be the Week 1 starter. That means it will take an injury to Mitchell Trubisky for Pickett to take snaps as the starting QB for the Steelers.

Instead, Jets’ rookie Breece Hall appears to be the best bet to win the award, as he appears likely to have biggest role of any rookie to start the season.

Hall has already landed as the top running back on the Jets depth chart. At Iowa State, Hall ran over 1,470 yards in each of the last two years and he contributed in the passing game, recording 36 catches in college last year.