Yes, it WAS a TD per the rule

Here’s a video link to the D-Jack TD catch at the end of the half, a play that the refs chose not to review…..even though the second foot does scrape the pylon. One foot down, second foot scrapes the pylon, per the NFL rule, that is a TOUCHDOWN.

Here’s a pic of the catch from the endzone. This is the moment after foot #2 has hit the pylon and it’s starting to fall down: 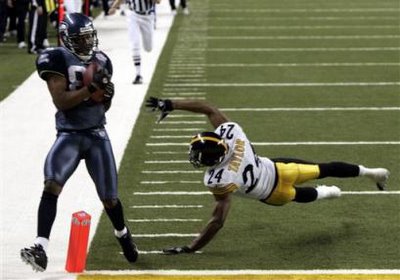 How that play, as close as it was, wasn’t chose to be replayed in the booth? Unforgivable. Per the NFL rule changed two years ago, the pylon is in play, period.

Does this make me feel better? Absolutely not. It makes me feel even worse, that we were hosed even worse than we thought. Think about it, you had the D-Jack PI call that took 7 points off the board, we now have this play that clearly is a TD if you believe the rule as one foot plus a hit pylon for a TD, and we had the Locklear hold that EVERYONE says was NOT a hold, period, and the player jumped offsides anyway……that’s 21 POINTS we lost on Sunday.

It’s bad business for the NFL to have such screw-ups in blatant view of America, and everyone outside of Pittsburgh is mad about the calls, etc. But it’s even worse business, like it or not, for the Seahawks to be NFL Champions. In fact, it’s a nightmare.

Here’s a big reason as to why America doesn’t like the Seahawks. It’s kind of simple really, but you know why? Because America is an “action movie” country. We like huge blockbuster films, we like big explosions, we like giant vehicles, we like big, in-your-faceness if there is such a word. Seattle, and the Seahawks in particular? They are about as opposite of in-your-face power as you can find. They don’t have the Cowher power defensive hitters, they play efficient defense with some speed. They don’t have the HR hitters on the outside and a QB that throws it 80 yards on a line, they methodically break you down with quick passes for short gains all the way down the field. America loves the home run, the slam dunk, the 400-yard drive, and everything else that is BIG. And Seattle ain’t big, not big as a city in an isolated area of the world, and certainly not a “big” football team! So it would have been a nightmare for Tags and company if the Hawks won that game. They would have lost millions, pure and simple, on a team that couldn’t be any less appealing in America.

As I told Maty Allen yesterday (who was very humble and totally agrees that the refs had a big influence, and also agreed that the Seahawks are the better team, but the Steelers just made a few more plays), 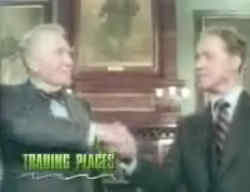 And where is Beeks? Where the hell is Beeks??!?”