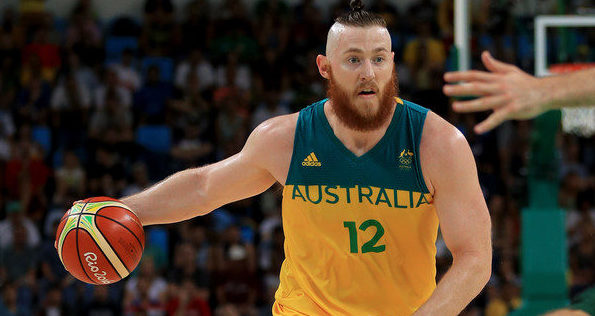 As first reported by The Vertical’s Shams Charania, Aron Baynes agreed to a one-year, $4.3 million contract with the Celtics.

With only the room mid-level exception to offer, the Celtics weren’t going to to lure an All-Star talent in the middle. But in Baynes, they found a solid big man to rebound, throw his body around and soak up minutes. The additional frontcourt depth is critical. Boston will likely unleash a lot of small lineups, but needed a bigger, reliable dude. At 6-foot-10, 260 pounds, Baynes fits the bill.

He should immediately walk into Boston as the team’s best rebounder. According to Basketball-Reference.com, Kelly Olynyk led the Celtics with a 13.1-percent rebound rate last season. Baynes checked in at 15.6 percent — and that was actually his lowest mark since his rookie season. He’ll grab a lot of boards.

Quite simply, this was the perfect signing for Danny Ainge. Aron Baynes is a hyper-physical player who crashes the glass, hits mid-range jumpers, has touch around the rim, and holds his own in the post.

Some background on Baynes: he was born in New Zealand but grew up in Australia. The 30 year-old is entering his sixth season after playing three years with San Antonio (winning a championship in 2014) and two with Detroit. He averaged just over 15 minutes per game for the past three seasons and never missed significant time due to injury.

He emerged on the scene during the 2013 playoffs when the Spurs swept the Lakers in the first round. In game four, he started in place of Tiago Splitter, and limited Dwight Howard — considered the NBA’s best center at the time — to seven points over three quarters. Howard was eventually ejected from the game, and was never again seen in a Laker uniform. His physical post-defense bothered Howard throughout that game and series.

Baynes signed a three year deal with Detroit after winning a ring with the Spurs. He was expected to be the primary back up to Andre Drummond, but Detroit would later sign Boban Marjanovic and Jon Leuer, while drafting Henry Ellenson, creating a crowded big-man rotation in the motor city.

He turned down a $6.5 million player option to sign a one year $4.3 million deal with Boston. It’s rare for a fringe rotation player to turn down that type of bread, but it makes more sense when considering the situation of his agent, Marc Fleisher. According to RealGM.com, Baynes is the only active player who Fleisher represents. They saw an opportunity in Boston for more playing time, and thought they could make up the $2.2 million loss during next summer’s free agency, given Baynes has a bigger role in Boston.

In a strange subplot, Josh Horford — brother of Al — was not a fan of the signing:

Nothing against Baynes. Just think a veteran who has proven himself or has playoff experience would benefit the team greatly.

Lies lol. Danny Ainge is smooth. But the team's rebounding issues (which Al gets criticized a lot for) are not smooth at the moment. https://t.co/wljO5gMnAD

It’s weird how Al Horford is so soft-spoken and never loses his cool with the media, but his family — between Anna and Josh — doesn’t hold back. I don’t see this being an issue, and I’d imagine Al Horford would love playing with a physical rebounder with championship experience.

Lastly, here’s a video of Tim Duncan carrying a drunken Aron Baynes onto the Spurs team bus (starts at around 45 seconds):

Yup, this guy should fit well in Boston.

Against Portland’s rookie bigs duo of Caleb Swanigan and Zach Collins, Zizic appeared focused and confident. He hit three of his four shots, set nasty picks, and was active under the boards.

Zizic, who spent last year playing for the Turkish Super League’s Darüşşafaka S.K., is adjusting to the NBA’s speed and athleticism.

“I need just a little bit of time . . .” Zizic said. “I expect a little bit more from myself to [get comfortable] with this style.”

Walter McCarty, who is coaching the Celtics’ team at the Vegas summer league, said he’s pleased with Zizic’s progress.

“I really just tried to get him more involved, get him rolling to the basket, post-ups, where he’s just not setting screens and rolling,” McCarty said.

“I wanted to get him involved where he can get more comfortable and get a nice rhythm for the game,” said McCarty. “Really [Zizic just needs] to learn the terminology, the lingo that we use, just run the floor, getting deep seals, rebounding, handing him the ball up top and being able to make plays.”

Ante Zizic has endured some criticism for his erratic summer league play. But the Croatian big-man had his best game last night, finishing with 9 points, 11 rebounds, and 4 blocks in a 70-64 victory over the Portland Trailblazers. Additionally, he helped limit the talented rookie duo of Zach Collins and Caleb Swanigan to a combined 5 of 19 shooting.

Jayson Tatum has been the star for the Celtics, while Jaylen Brown is clearly on another level. Zizic has been an easy target for Celtics fans. Last night’s game was a step in the right direction. He plays within himself as a big man, and simply needs to adjust to the speed of the game, as he often looks out of shape.

Zizic doesn’t lack self-awareness. He spoke with The Boston Herald’s Mark Murphy about his early struggles:

“This is my fifth game in the states. I need to adjust to this type of game. Everything is much faster, but today I thought I played really good,” Zizic said. “Congratulations to my teammates. I just need a little bit of time. I expect more from myself, but I have to adjust to this style of game.

“The game is much faster but for me that’s not a problem. After training camp I will be ready 100 percent for this type of game. I’m just trying to find my role. Game like this I’ve always played physically, so that part is not a problem for me.”

Some Celtics fans thought Zizic could join the team and immediately get minutes. Based on his summer league, he looks like more of a project. But we need to keep perspective. It’s just summer league. He’s never played in the NBA. If he gets in shape and picks up Brad Stevens’ system, I see no reason why he can’t be our 9th or 10th man come November.

Crawford acknowledged yesterday that few coaches have allowed him to do what he does best — play point guard. Stevens was able to draw similar qualities out of [Evan] Turner by allowing him to play on the ball.

“First off he gave me the opportunity to play point, and that alone sets him apart,” Crawford said yesterday. “Even in D.C. (with the Washington Wizards) when I played the point there was hesitancy to give it to me. His trust in me gave me the confidence to play the position.

He finds what you do well and he also keeps it simple. He kept me locked in to every possession. It makes the game easier, gives you a chance to win. He puts you in a position to be there in the fourth quarter.”

Crawford was admittedly better for the experience.

“I was a better player because he allowed me to go out there and find my way,” he said. “Each coach is different. With me, I’m always going to play how I play — I’m going to do what I do best. But coaches have different ways.”

I love hearing these quotes from Crawford. He’s talked glowingly about Stevens in the past, and continues to appreciate the 3+ months he spent with Stevens during the 2013-2014 season.

Personally, I’m an irrational Jordan Crawford fan from his time with the Celtics (shameless plug, I know). I’m rooting for him to succeed in New Orleans.

It’s not uncommon to hear opposing players praise Brad Stevens. They’re impressed with how he’s elevated this Celtics roster throughout his four NBA seasons. Guys love playing for him, and they always mention how he’s invested in the development of every player on the roster.

Look at the Baynes signing. Would he really leave millions of dollars on the table if he didn’t have faith in the coach he’s joining? Brad helped lure Gordon Hayward and now Baynes. I hope Crawford speaks positively about Brad Stevens in the New Orleans Pelicans locker room… And I hope Anthony Davis listens…

Anyone else overly hyped for Jaylen’s second season???

Boston Globe: Marcus Morris has Much to Offer | Morris Expected in Town for Physical | Without Bradley, Rozier Should Expect More Minutes

Bleacher Report: Bright Future for C’s, Despite Many Questions

WEEI: Jaylen Brown Wants to Be a Playmaker

ESPN: Back-to-Backs an Adjustment for Tatum