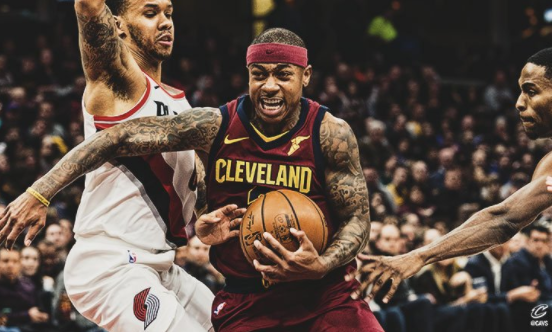 “I feel like a damn rookie,” Thomas muttered under his breath as he sat down in front of his wine and gold No. 3 uniform. He didn’t play like a rookie, however, as he scored 17 points and played 19 minutes in his long-awaited Cleveland debut.

“It was a special night for me,” Thomas said afterward. “I haven’t played in seven months, so to be able to be out there and compete against another team was special. Obviously to get the win was even bigger but just to be able to compete and be out there in a game setting, it was a great feeling for myself.”

I’m no scout but I can say this with certainty – Isaiah Thomas looked pretty damn good last night. After 7 months off the court, Isaiah showed us he can still drain 3s, get to the hoop, make a nifty pass, fall to the floor frequently, and whine to the officials.

Unless there are any hiccups in the final stages of his rehab, he’s going to be a major problem for the Celtics moving forward. (There will likely be some chemistry issues with LeBron, Kevin Love and Dwyane Wade because a) Thomas is an alpha who needs 20 shots and b) there’s always some sort of drama with LeBron.)

Fortunately, the Celtics won’t have to deal with him tonight:

“That minutes restriction don’t make it hard at all,” Thomas said when asked about sitting out Wednesday. “It would be hard to play in Boston with a minutes restriction. Whatever they say, I can’t play in back-to-backs for however long. I’ve got to follow their rules and continue to get better each and every day.”

Thomas claims he can play 40 minutes right now, despite the Cavs holding him to about half that total on Tuesday.

The Celtics will not honor Thomas with a video tribute during Wednesday’s game, at Thomas’ request. The team plans to keep any tribute for a future date when Thomas is playing, with the next opportunity being that Feb. 11 game, during which the Celtics plan to retire Paul Pierce’s number.

“I know it will be all love,” Thomas said. “I keep saying that I gave that city everything I had and they showed me genuine love back, and I think that love is going to last forever. So, there’s no hard feelings. This ain’t no revenge game. They know what they gave up. They knew what they got. It’s all good. I’m focused on the Cleveland Cavaliers and trying to win a championship.”

Let’s talk about this video tribute for a minute. First off, the Celtics didn’t do Thomas any favors by releasing the news that he asked for it to be delayed. Thomas is now catching flak from some fans, a hockey blogger and the Herald’s Steve Buckley for appearing like a diva.

I took a few shots at IT for opting to return against Portland and dodging the Cs so don’t call me a stooge. I just don’t see anything wrong with him expressing a preference. And this notion that having a 90 second tribute video hours before Paul Pierce is getting his number retired somehow infringes on the Truth’s night is laughable.

On Page 2, we are reminded that athletes are humans first, players second.

The pain and anguish of her death didn’t dissipate when the season began, and Crowder had to concentrate on basketball games. So he compartmentalized his healing, and some days the process was better than others.

“I have my days, I ain’t going to lie to you,” he said. “I have days where I don’t want to do [expletive]. I just want to sit there and think about her all day. I take a minute to myself here and there, as I should. I think about her every day. But I think it’s set up to be a special year because a lot of stuff has been going on. I feel like I put a lot of time into my work and hopefully it pays off for me.

Jae Crowder opened up to Gary Washburn about the death of his mother and how it overshadowed angst about the trade. It’s a good reminder that these guys aren’t robots.

Globe – There’s a lot going on with Celtics/Cavs Wednesday

Herald – With opening loss in the past, Celtics gear up for Cavs