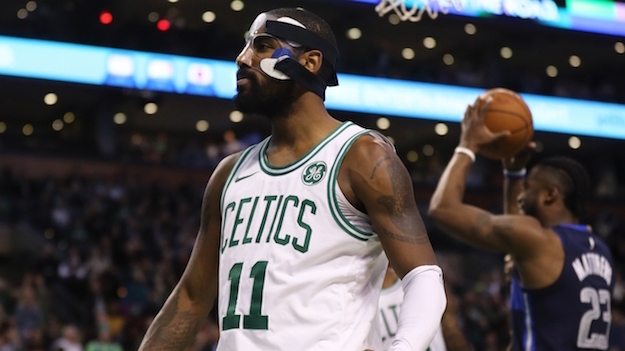 Asked what changed late in Wednesday’s game, Mavericks coach Rick Carlisle offered, “I don’t have an exact recollection of it. Irving made some amazing plays, which he always does.”

For his part, Irving shrugged off his latest exploits.

“Just winning time,” he said. “Simple as that.”

Irving then apologized to reporters, wondering if they were sick of hearing him say how much he enjoys the final minutes of a close game.

A reporter then asked if Irving considers the game an art form.

“It’s just a constant masterpiece that you have to paint. Sometimes it’s going to be all scribble and stuff like that, it’s OK to get out of the lines. That’s the way I think of it sometimes or, excuse me, most of the time when I’m describing it and watching it, just watching so many different details that I need to do in order to think about the best way to get a win.”

We’re going to do a lot of interpreting of quotes in today’s dump. Most of them come from Kyrie Irving, who in addition to winning multiple basketball games this season, has also provided us with quotes that range from reflective to confounding to confusing. But let’s start with Rick Carlisle– who essentially admits what we have all come to know as Celtics fans in these few short months. An interpretation of his quote above:

“There was a basketball game last night, it was close, some good stuff had happened, then Kyrie also happened and the game was over. Other than that, it’s all a little blurry… I think the big french guy on their team might have hit a 3, pulled an arrow and dabbed at mid-court, which wasn’t in our scouting report, but other than that, I have no idea.”

I have tracked down the Yabu dab. Cherish it for all its glory. pic.twitter.com/pdkHZ43Lhu

We could spend this morning talking about the solid bench minutes, and shot-taking perseverance of Shane Larkin and Terry Rozier, who both pushed through some rough shooting early to provide needed points off the pine, but instead, lets talk about how everything that came out Kyrie’s mouth in the hour after he dispatched of the Mavs was pure gold and was a microcosm of all this is Kyrie. We’ll give each quote below a rating and a bit of analysis:

Quote: (on basketball as art) “It’s just a constant masterpiece that you have to paint. Sometimes it’s going to be all scribble and stuff like that, it’s OK to get out of the lines. That’s the way I think of it sometimes or, excuse me, most of the time when I’m describing it and watching it, just watching so many different details that I need to do in order to think about the best way to get a win.”

Analysis: This is an amazing quote and a wonderful analogy, which reminds me of how KG described the recipe that makes up a perfect team back in 2012:

“Timing is everything, and chemistry isn’t something that you just don’t throw in the frying pan and mix it up with another something, and throw something on top of that, and then fry it up, put it in a tortilla, put it in the microwave, heat it up and give it to you, and expect it to taste good. For those who can cook, y’all know what I’m talking about. If y’all don’t know what I’m talking about and can’t cook, then this doesn’t concern you.”

For all Kyrie Irving has done on the court, if he could give us more KG-type metaphors tying basketball to other aspects of life, I’ll retire his number tomorrow.

Quote: “It’s always great to go against — it’s kind of weird to call them young guys because I’ve been watching, I knew about these guys when they were in middle school and high school. I’m just an avid YouTube watcher, an avid studier of people’s games. So I’ve been watching him since he was in high school, when he was doing windmills on his AAU team in North Carolina. I’ve been studying for a while. And to play against him now as a 25-year-old man is awesome.”

Rating: Computer nerd/Bran the Three-Eyed Raven from Game of Thrones

Analysis: Dennis Smith, watch where you’re going next, because Kyrie has been and will continue to watch your ass. And don’t you think there’s a YouTube video of you he hasn’t seen, because he has seen every YouTube video– from vintage pieces such as I Like Turtles to refined viewing experiences such as David After Dentist. For those Thrones watchers out there, Kyrie’s clearly the real Three-Eyed Raven and is the only thing that can stop the Night King in season eight.

Quote: “It’s fun for me because you really just have to blow into your bag of tricks and prepare yourself for whatever the defense is about to throw at you,”

Analysis: I was a teacher for a while, and WC (word choice) is what I’d write on papers when students would use a word that didn’t quite fit. I was going to pull WC here on Kyrie for blowing into his bag of tricks as opposed to reaching into, or pulling something out of said bag, but then I remembered Kyrie is a fucking sorcerer and if he accesses his tricks by blowing into his bag (a bag made out of broken ankles from point guards since discarded) then sure, blow away, Kyrie. Who am I, a former 9th grade World History teacher to correct you?

On page 2, Mark Cuban on how to copy the Celtics

“It’s a great organization, and they’ve done a great job,” Cuban said. “I think the hallmark of what they did is how they get their teams to play hard. That’s really what we look to emulate more than anything else. I mean, they’ve done a great job in the draft, but there’s as much luck as anything else there, and things have got to fall in your lap one way or the other. So the way it’s worked out, the biggest takeaway that we’ve seen in looking at the Celts — and we’ve done a lot of deals with them, so we’re close to them — really, more than anything, it’s just how hard Brad gets his teams to play. ”

Cuban spent a lot of time with the Boston media thoroughly breaking down why the NBA is so popular (worth a read), but I wanted to zoom in on what it is that Dallas hopes to emulate about Boston. This feels timely because much of the talk on sports radio lately is about how the players make the coach in the NBA, and that Brad Stevens is neither as valuable as his best players nor as valuable as Danny Ainge.

Look no further than what Cuban admires most — it isn’t the bounty from the Nets trade, nor is it the talent on the court. Cuban loves how hard Brad’s teams play. He’s traded with the Celtics and lost, and I’m sure as he watched Jae Crowder develop he didn’t think: “Man, Danny really fleeced us,” but instead, “wow, Crowder wasn’t doing that in Dallas,” or “we weren’t using Crowder that way.” And Cuban has one of the best coaches in the NBA on his sideline, yet he still admires Stevens and hopes Carlisle can get his team to play that way.

I don’t want to start debating whether or not Brad Stevens is the most important Celtic, but let’s put the kibosh on this dumb argument that it doesn’t matter who the coach is in the NBA– that talent wins over all.

CSNNE — Next man up