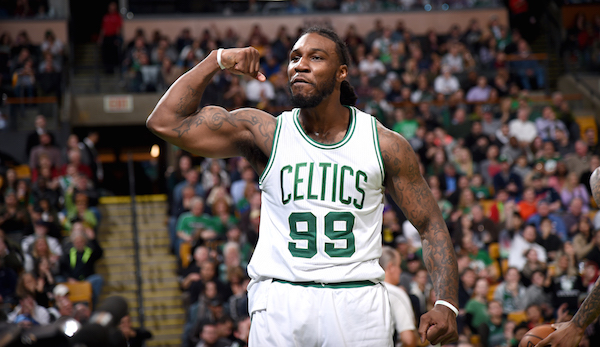 Stats & Info: There were three small forwards who ranked inside the top 15 at the position in both offensive and defensive RPM. The Cavaliers now have two of them, with Jae Crowder joining LeBron James. (The other is Milwaukee’s Giannis Antetokounmpo.) Crowder gives Cleveland another versatile defender to not only match up better with Golden State, but also spell James on the nights he needs a rest.

Above DeMar DeRozan, Al Horford and Hassan Whiteside on ESPN’s NBA player rankings sits Jae Crowder. While Crowder endeared himself to Celtics fans over the last two and a half seasons, he was an afterthought, at least initially, when Bostonians started processing the trade that put Kyrie Irving in green.

Come on, you can’t deny that. As trade rumors spilled out, most fans processed in the following order: “woahhhh we’re trading Isaiah?!?!?” “wait, if they’re giving up a pick, which pick? I hope it’s either their own pick, or the Memphis pick, or the Clippers pick, but definitely not the Brooklyn pick or the Lakers/Kings pick.” “Ahhh! It IS the Brooklyn pick. That’s a lot to give up, but, I mean, Kyrie is only 25 and he’s an incredible offensive talent.” “Poor Isaiah. After all he did for the Celtics, it sucks that he gets traded seemingly out of nowhere.” “What’s Ante Zizic’s favorite Julia Roberts movie?” “Wow, this opens up a ton of time for Jayson Tatum and Jaylen Brown.” “You know, I’ll miss Jae Crowder.”

And so, if you’ve followed Lord Kevin Pelton on ESPN, he whose house worships RPM with the symbol +/- on his shield, you already know what the ESPN rankings tell you: Jae Crowder is super valuable. According to the rankings, he’s more valuable than an all-star two guard in Toronto and the Celtics best passing big man.

Losing Crowder likely means a slower start to the season for the Celtics than some would hope. The Cs struggled with him off the court, and may struggle to plug in younger pieces in Crowder’s absence. It makes one wonder if when looking back at the trade at season’s end, will the order of reactions be the same? Or when someone is asked to reflect on the Irving trade, will they start with “you know, we really missed Jae Crowder this year.”

By the way, Sports Illustrated is doing their list and has Crowder at 44, behind Whiteside, DeRozan and Horford.

On page 2, the Celtics roster turnover for a contender is extremely rare

Looking back at teams that have advanced to their respective conference final, no team in the last decade has gutted their roster to the extent that we have seen the Celtics do this offseason.

While there have been a decent number of teams to have rosters with single-digit returnees the following season, this Celtics team is very much in a class unto itself.

In fact, the closest team to returning so few players from a team that advanced to the NBA’s equivalent of the Final Four was the Orlando Magic after they advanced to the Eastern Conference finals in 2009.

The following season, they returned just seven players from the previous team.

To endure such a major roster reconstruction raises lots of questions about chemistry. Specifically, how long will it take to develop?

CSNNE — How rare is it for a conference finalist to return to have four returnees?

The extreme roster turnover for the Celtics has me as excited for the start of the season as I was back in 2007. In ’07 I was interning at NBC10 in Philadelphia in the sports department, where my job was to watch Philly sports on the 8 different TVs we had in the office (terrible, huh?), and mark down the times of important plays so we could find them when putting together the 11pm broadcast. I was a hardworking intern, and really well liked by the anchors and producers… until the start of the Celtics season.

Since we had access to every game across every league, I’d turn the last TV to the Celtics and sneak glances throughout the night. I remember during the opener against Washington, I was so transfixed on the new Big Three that I completely eschewed my responsibilities as an intern. Luckily, instead of getting yelled at, I just got made fun of constantly.

This year, the Celtics season will start just two and a half months before my wedding. It’s crunch time, and I’m sure there will be lots to do each night. Unfortunately, I’ll probably revert back into my 21-year-old self and shirk my responsibilities for the wedding. If I end up single and with a canceled wedding, I’ll have this new and intriguing Celtics roster to thank.