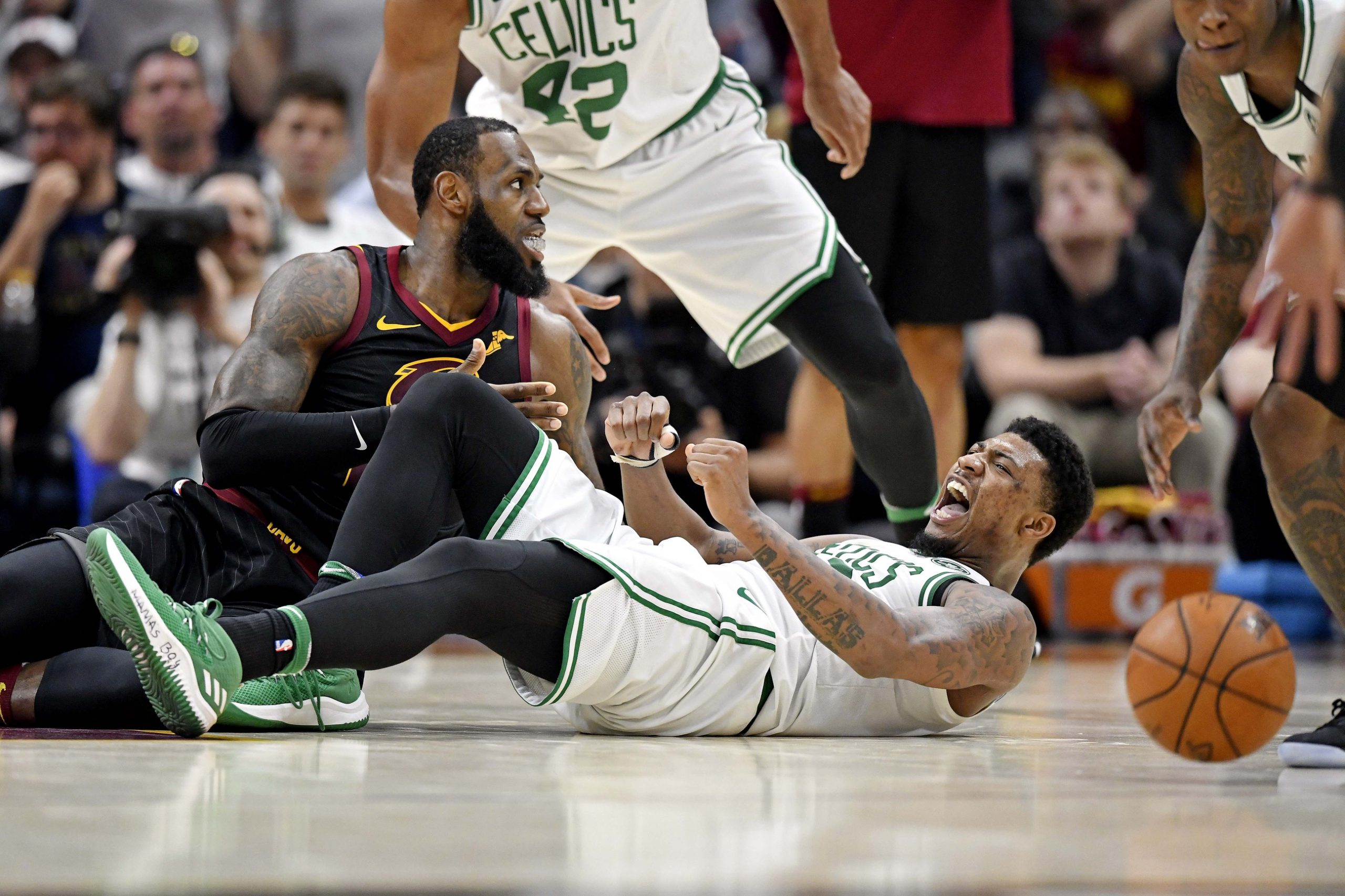 An NBA source tells DallasBasketball.com that depending on Smart’s asking price, the Mavs can be expected to explore pursuing the 6-4 guard, a defense-first battler who scores 10 points per game for a Celtics team that made it to the Eastern Conference Finals.

On the one hand, Smart, the sixth-overall pick in the 2014 NBA Draft, seems committed to a return to Boston. “I’m here,” he said. “They’re already planning for me to be here. Those guys, I tip my hat to those guys. You don’t see a lot of organizations that’s as clear about their players as the way this organization does it.”

I dunno, guys this seems pretty far-fetched, given that the Mavs still have to sign Nerlens Noel (insert eye-roll emoji here).

Seriously though, I don’t know what on earth Rick Carlisle would do with Smart other than get mad at him and bench him.

Look, the Mavs won a championship, but the last year has taken a real shine off the organization.

I mean, OK, so Noel’s former agent (and Smart’s current agent) Happy Walters turning down a $70M/four-year offer resolved itself with Noel signing the mandatory minimum one year qualifier. Fine, gambled and lost (Noel went on to fire Walters, but Marcus is still working with him).

It’s what happened next that makes the Mavs look bad.

A guy they were prepared to pay $17.5 million per year ended up on the bench.

On the bench of a team that was terrible and bound for the bottom of the league.

Now there are only three possible reasons why Noel ended up riding the pine (or, in this league’s case: sitting on a padded folding chair with ads on it).

None of those reasons makes the Mavs look good. Sure, 2 & 3 make good business sense, but if Carlisle was willing to go along with 2, then he’s not the coach we all thought he was and the Mavs are hypocrites, and if the team pulled 3, then no free agent in the league should want to sign there. The only thing that’s even remotely positive for players is that the Mavs might be kind of dumb, but that only benefits your wallet–you’re not going to win playing for a team that can’t manage its money.

Bottom line is the Noel situation throws up huge red flags for any player that has a choice where they play and who they play for.

And then there’s the question of what the Mavs would even do with Smart. Granted, they won a title in ’11 in part because Carlisle made good use of an unconventional PG, J.J. Barea, but you’ve got to give Barea credit for stepping up in that situation, and since then, the team’s gone through something like fifty or sixty different PGs (I could be exaggerating, but no less than 8 PGs played for the Mavs in 2016/17 according to basketball-reference.com), and haven’t been able to do anything with any of them–including a second stint from J.J. Barea.

I can’t envision any scenario in which the Mavs would be happy with Smart’s output as a starting PG, and paying above-market to stick him behind Dennis Smith basically means they’re taking money off the table they could give someone else, handicapping their efforts to build a contender–and I don’t see Smart being able to contribute unless he’s playing for a team that’s climbing the ladder or contending.

Page 2: Where the Celtics finally moved into their new digs

“There’s so many more things we can do in here. Just as simple as, and I know this sounds like a little thing, but we’ve been watching film in the middle of our locker room with all of our stuff hanging on our chairs and every distraction you can imagine. Being able to walk across the hall into an empty space and sit down and have a study room and a film room is huge. To be able to have all the hydrotherapy things right here, for our guys to be able to take advantage of that, is huge, you know, not having to leave our facility to do that.

“And obviously we have everything imaginable — the kitchen — I can’t say enough good things. It has everything you need to grow and get better.”

Celts co-owner Wyc Grousbeck spoke about the honoring of tradition in naming the facility after franchise patriarch Red Auerbach.

So, you can count me among the group of people who thought this new facility was more about appearances than substance. I’ll grant you, my knowledge of Boston’s geography and traffic is of the slightest (it can be summed up thus: the city center is on a peninsula and it sucks, respectively), and I couldn’t say whether the move from Waltham into the city made any difference at all in the time or frustration required to get to practice (or in the case of coaches & execs: the daily commute)

The nifty glass clerestory windows with the banners in them? All I saw was cheap advertising for the team.

To the idea that it will help land free agents? Pfft. These aren’t 16 year old HS students. If a nifty building makes them sign a $100M contract, then you shouldn’t be offering them a $100M contract.

However, the above quote is enlightening.

I figured that the worst that could be said of the Waltham facilities is that it brought the team and staff into (gasp, the horror) semi-regular contact with regular human beings, and that the digs didn’t look that snazzy.

But if they were breaking down film in the locker room, that’s–well, actually, I’m kind of surprised that they let that go on as long as they did.

So my people will be getting ahold of Wyc’s people later today and letting him know that Red’s Army officially approves of this new facility, and also that it should’ve been built a long time ago.

Doubtless this will be a huge relief to Wyc & co., who as we all know, covet and court media approval for every move they make.

The new Auerbach Center looks a tad nicer than where the #Celtics of the 1980s practiced: a tiny, HS-like gym at Hellenic College. pic.twitter.com/wlNNyTILJl

More reviews of the new digs:

Finally: What did Mike Krzyzewski think of Tatum’s rookie season?

I don’t know. I don’t like the guy so I didn’t read the article, but if you want to find out yourself, you can read it here.

MassLive: Kyrie Irving says Boston Celtics are positioned well for the future: ‘We have an incredible organization’

NBC Sports: Could Smart head home to play in Dallas?