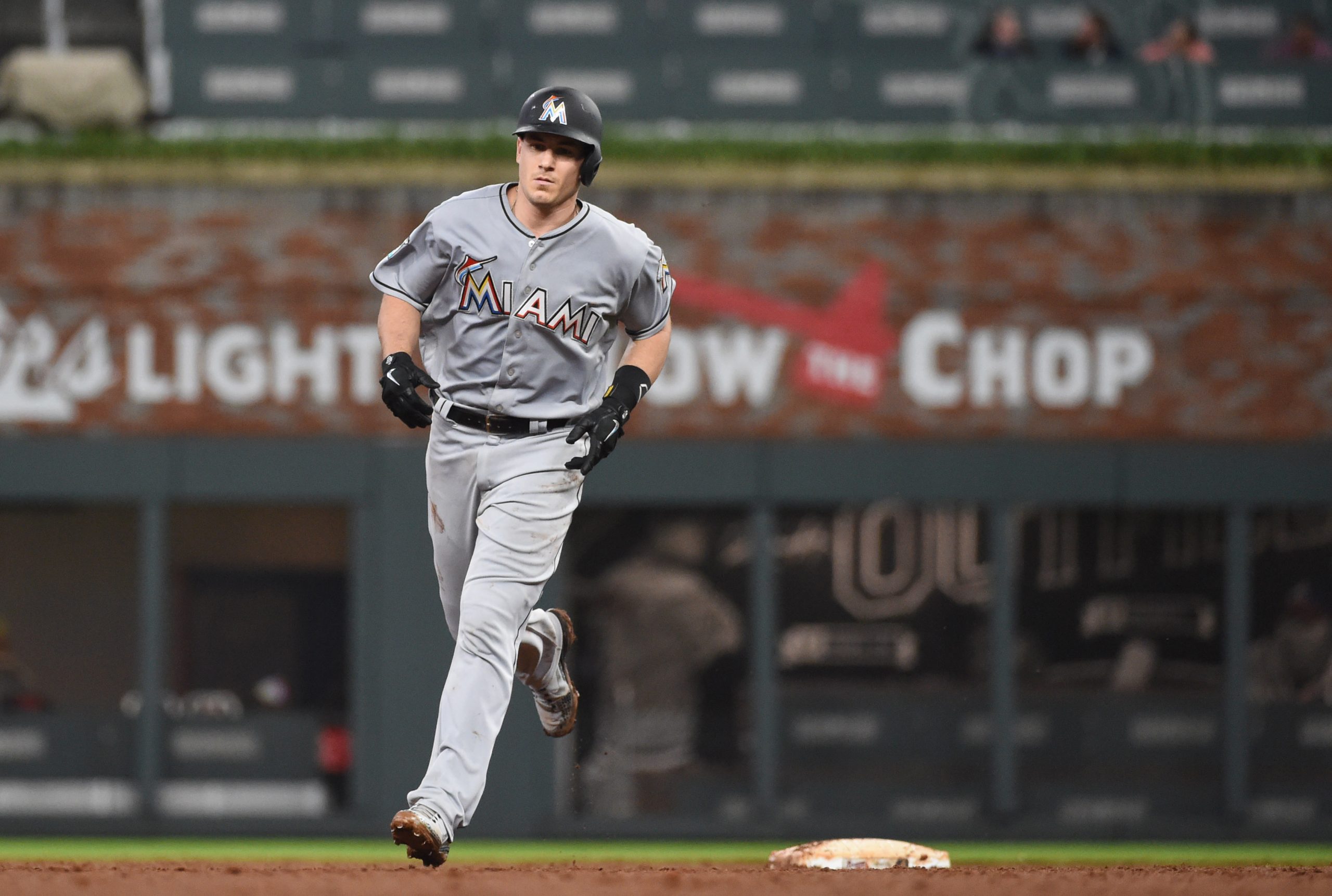 Fifty days ago, the Boston Red Sox dispatched the Los Angeles Dodgers and the hot stove was turned on. For seven weeks, the Miami Marlins have essentially had J.T. Realmuto on eBay with a ridiculous reserve price. The Nationals were intrigued, but ultimately traded for Yan Gomes and signed former Brave, Kurt Suzuki. The Astros called, but signed Robinson Chirinos instead. The Yankees, who already have a good catcher, grew tired of the games played by their former captain, Derek Jeter, and his new squad. And last night, the Mets gave up and signed Wilson Ramos.

While other teams could use a catcher and Yasmani Grandal is available, the Marlins’ available suitors continue to dwindle down. Other teams could jump back in like the Red Sox, though they love their catcher situation. The Indians are likely not going to add Realmuto’s salary while the Angels don’t have the farm system. The Padres and Reds don’t seem like fits considering their current rebuilds, though both have been loosely attached to the Realmuto chase. The Dodgers also seem like a fit, though their focus is currently on Bryce Harper. And then there is the Braves who, to borrow that eBay metaphor from before, have submitted what might be the best bid though it still hasn’t reached Miami’s reserve price.

The Braves were early favorites and according to the Marlins’ beat reporter, Craig Mish, they have continued to be the heavy favorite. The Braves signed Brian McCann early in the process, but appeared willing to still engage in talks with the Marlins until about a week ago. At that point, according to Mark Bowman, the Braves pulled back. The absurd price tag the Marlins sought, which at one time included Ozzie Albies, was one thing, but I feel Alex Anthopoulos understands another thing all too well.

To put it simply – he’s probably already put the best offer on the table that the Marlins will get. If they take it, great! The Braves add the best catcher in the game for at least two years. If they don’t, the Marlins will willingly take less than they could have had for Realmuto out of some foolish need to get him out of the division. Either way, the Braves will be fine. McCann and Tyler Flowers do not equal Realmuto. They probably won’t even equal 2017 Flowers and Suzuki. But they are far from the worst catching situation in the majors and are relative bargains for their value.

Of course, what the Braves want is Realmuto. Just 27-years-old, Realmuto had his best season in 2018. He finished the campaign with a .277/.340/.484 clip, a .353 wOBA, and a catcher’s high 4.8 fWAR. It landed him his first Silver Slugger along with a well-deserved trip to the All-Star Game. While early projections don’t expect Realmuto to sustain that rate of offense, Realmuto is a good bet to outperform those projections. He hit the ball on the ground far less in 2018 than he had done over his career, which increases projected offensive performance. He also hit the ball slightly harder in terms of exit velocity – leading to a hard-hit rate of 40.8% according to Statcast. That was roughly 5% higher than previous seasons.

The Braves naturally think – and the league agrees – that Realmuto is just hitting his prime. They want him behind the plate. The problem is that the Marlins have overplayed their hand and the Braves know it. Hell, everyone knows it. A year after being criticized for not getting enough in return for their outfield of Giancarlo Stanton, Marcell Ozuna, and 2018 MVP Christian Yelich, the Marlins want to make sure they get top value for Realmuto. There’s nothing wrong with that, but you also have to know when top value is on the table. If reports are correct, the Braves have offered a package centered around Austin Riley and Mike Soroka. It’s hard to beat that.

The Marlins are also seemingly confused about what they should be after in trades. According to one report, one reason the Mets passed on Realmuto was that the Marlins wanted one of these three: shortstop Ahmed Rosario or outfielders Michael Conforto and Brandon Nimmo. With their farm system, the Marlins should prioritize years of control over established or semi-established talent. Comforto is a free agent after 2022. Nimmo is controlled through 2023. Optimistically, the Marlins would be contenders by the time these guys were eligible for free agency.

Miami also has been reluctant to deal within their division, which is yet another thing that makes zero sense. If you aren’t competing for another nearly half-decade, what does it matter if you trade Realmuto to the Braves? At worst, you hurt the Braves long-term by taking at least two high-value assets off their hands so that when you get ready to compete, you won’t have to face those players. The Braves are unlikely to extend Realmuto with one of their top prospects, William Contreras, a few years away, and the Braves probably unwilling to meet the long-term demands Realmuto will seek.

So, the Braves wait. And as does Realmuto. As tired as fans are of this drawn-out mess, nobody is more tired of it than Realmuto. At one time, he expected the Marlins to add to the young nucleus they had built, not trade it all away except for him. Now, he’s two years away from free agency in a no-win situation with a front office that is waiting for someone – anyone – to offer them Mike Trout and Jacob deGrom in the same deal.

While the Marlins should want to tie this up as quickly as possible before another potential trading partner signs Grandal and moves on, they seem content to let this process slowly pass. In the mean time, the chances Realmuto reports to camp as a Marlin increase. And let’s be clear – the Marlins won’t get a better offer at the 2019 trading deadline than they have received already. At that point, Realmuto will be even closer to free agency and the market will be smaller with fewer buyers. If the Marlins don’t find an acceptable offer then, they will hit the 2019-20 offseason with Realmuto a year away from free agency.

The time to deal Realmuto is now.

Will the Marlins blink and accept the best offer they may possibly get? Or will they bungle this to try to make up for prior deals that resulted in weak returns by getting a monster haul for Realmuto?