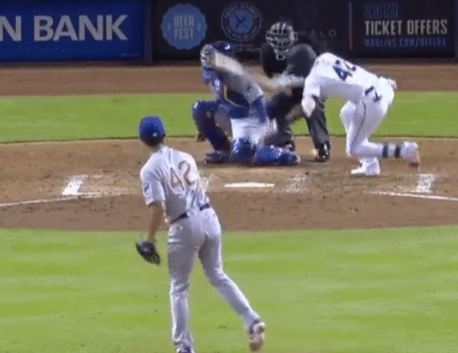 Yu Darvish’s 2019 campaign has been a nightmare so far, and it’s starting to look like the Cubs may get buyer’s remorse after awarding him a huge contract last February.

Darvish was given a six-year, $126 million deal, and he’s still yet to look like the dominant pitcher he once was for the Rangers, whether it’s command or mechanical issues. He’s given up 16 hits and 12 earned runs in just 17 2/3 innings pitched so far this year, with four home runs, which is awful.

He did do something cool in his most recent outing against the Marlins, though, drilling and knocking down three guys with one fastball. Lewis Brinson, umpire Brian O’Nora and catcher Willson Contreras all hit the deck.