Zach LaVine is the Minnesota Timberwolves most tradeable asset 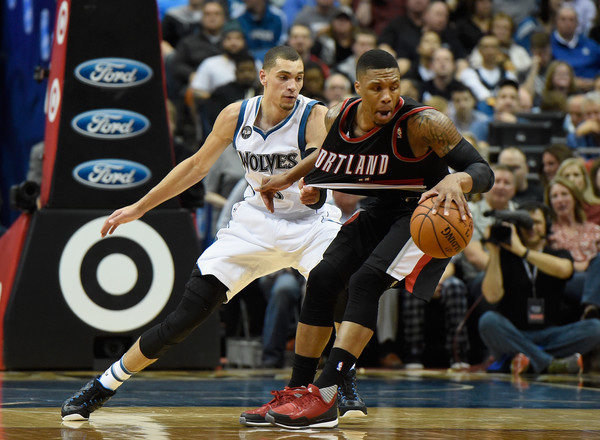 The Minnesota Timberwolves are in the midst of a three-game winning streak. Back-to-back wins versus the Houston Rockets and Oklahoma City Thunder give fans a glimpse into what the future looks like in Minnesota – but does that future contain the current starting lineup?

Amid the small glories of the winning streak, trade rumors linger in the background. The inklings could swell to a fever pitch as the February 23 trade deadline approaches. The offseason saw a flurry of trade rumors nearly come to fruition on draft day. A combination of point guard Ricky Rubio, shooting guard Zach LaVine, and the fifth overall draft pick was almost dealt, supposedly to the Chicago Bulls for shooting guard Jimmy Butler.

The scenario never played out but could it in the next six weeks? A trade probably won’t happen with the Bulls again, but the rumors are seemingly endless around the league. We’ve heard a lot about the trade potential for Rubio, but could LaVine be the team’s most tradeable asset right now?

LaVine sat out Wednesday’s game versus the Houston Rockets and Friday’s game versus the Oklahoma City Thunder with a hip injury. His absence allowed the team to show what they can do without him, and with good results. LaVine, although he is the third piece in the team’s young core, hasn’t quite solidified his role in the lineup yet. Yes, he can do the things a guard should do – shoot, dunk, and flash – but a look at the stats shows LaVine is the odd man out.

To his testament, LaVine is the team’s third-leading scorer with 20.4 points per game, good for the team’s third highest player impact estimate (PIE) of 10.2. While any competitive NBA team will find a spot for a player who can score, LaVine needs to improve his defensive ability if he hopes to make an impact on the team that head coach Tom Thibodeau desires.

Comparing his numbers to the rest of the team, his fellow starters, and position group shows that LaVine may not be missed.

While he can score, he is far from the best starter, nor the best guard on the team. It seems the Wolves biggest weakness is a lack of veteran presence on the court. Nine-year veteran shooting guard Brandon Rush started in place of LaVine versus Houston and Oklahoma City and might have proved that he is the missing piece to success.

Compared to the rest of the league, Minnesota’s net rating is -0.8, 16th overall. The team needs to make a move on defense if they hope to flip their rating into the black and place themselves among the league’s elite.

This season is LaVine’s first as a full-time starter. His defensive ability could improve with experience, as we have seen happen slowly with small forward Andrew Wiggins. The Wolves could easily wait and see the progression, but if they want to make a trade now, LaVine is the most likely to go.