Julio Teheran: Bargain? Needs to be Traded? Both? 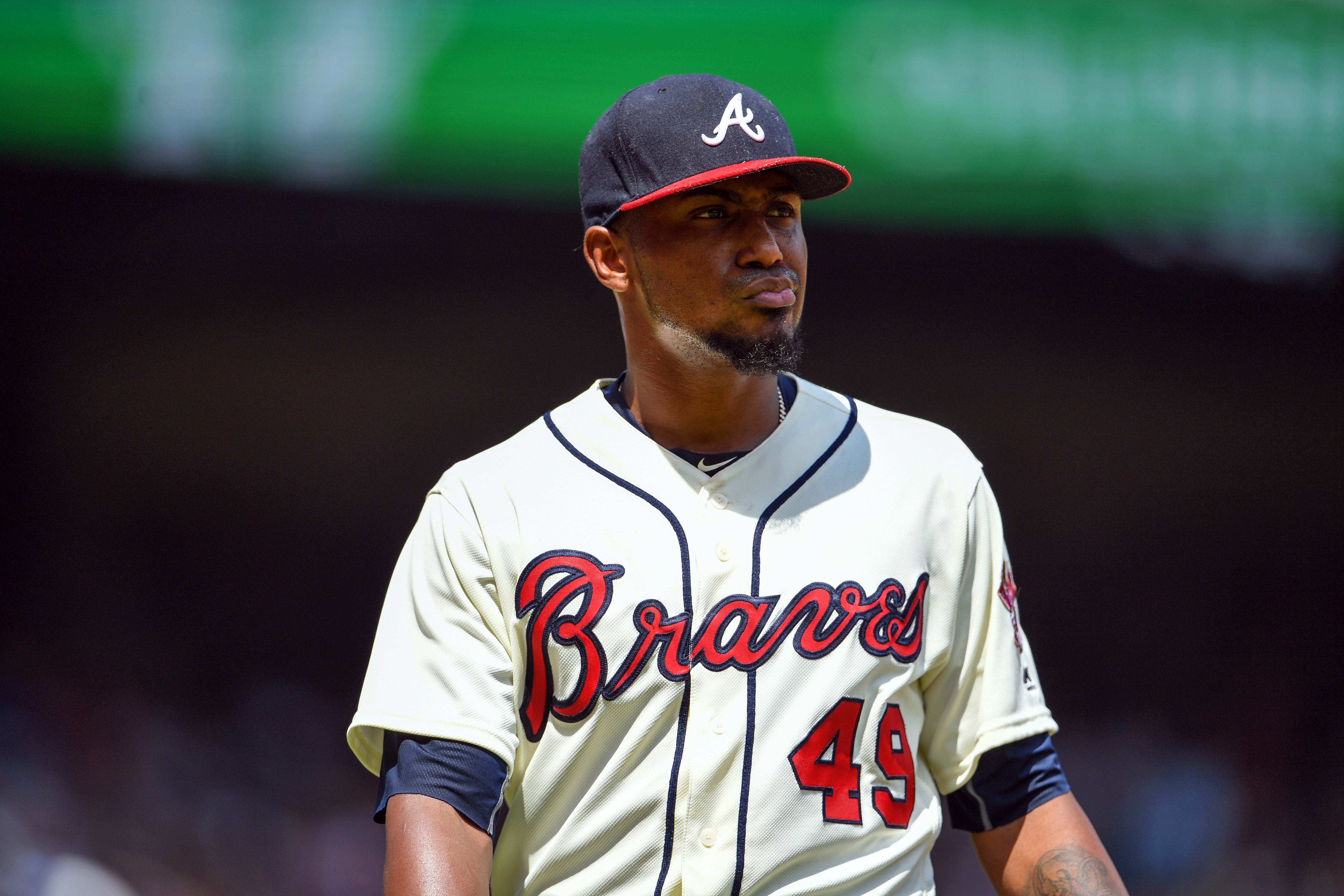 Julio Teheran: Bargain? Needs to be Traded? Both?

When it comes to the Braves’ right-hander Julio Teheran, you often run into two schools of thought – one low on context and one low on facts. The latter considers Teheran overpaid, along with overrated, and a player that needs to be moved. The former considers Teheran a relative bargain in this climate and sees trade talk as a potential pathway toward selling low on productive talent. One is more wrong than the other, but that doesn’t make either right in my judgement.

To the idea that Teheran is overpaid or a bargain, the facts could not be clearer. Teheran is, indeed, a relative bargain considering the market. In the final guaranteed year of a six-year contract, the Braves still owe at least $12 million. They hold a club option for 2020. Should they pick that up, the Braves will Teheran the next two seasons $23 million. Let’s put that into perspective. One of last year’s “value” signings, Tyler Chatwood, just earned $12.5 million for a 5.38 ERA. Chatwood is owed an additional $25.5 million over the next two seasons. His career ERA is 80 points higher than Teheran’s – and that’s not because of Chatwood’s time in Colorado, where his ERA is much lower. Would you rather pay Teheran $23 million over the next two years or $25.5 million to Chatwood?

But there’s also the crude, but effective comparison between actual salary and estimated salary based on fWAR. To be fair to his detractors, in 2018, Teheran was paid more than his fWAR said he should have have been paid. It was the first time that ever happened. Throughout his career, it’s been the other way and often to a large degree. In 2016, according to his fWAR, Teheran was worth $25.3 million. He was paid $3.3 million that season.

While you could focus entirely on 2018 as a smoking gun, I would argue that in no way has Teheran been a problem salary-wise for the Braves throughout his career.

So, he’s not overpaid, but what about overrated?

That question is a little more complex. Obviously, it’s subjective and depends greatly on who is rating him. But let’s play Devil’s Advocate. There was a time that Teheran was considered by, most importantly, the Braves the best of a quartet of young arms that also included righties Randall Delgado and Arodys Vizcaino, along with the lefty Mike Minor. Career-wise, that expectation played out, but nevertheless, Teheran is still considered a disappointment. Part of that was due to his first full season, 2013, and the big contract he signed following the season. That year, he had a 3.20 ERA over 30 starts. After the contract was signed, he had an even better 2014 season with a 2.89 ERA and his first 3 fWAR season. Big things were expected. Since then, three of the next four years have been worth 2.9 fWAR. The outlier, 2016, tied his career-high with 3.2 fWAR. After setting a bar, Teheran has only reached that level of production in a quarter of the seasons that followed.

There’s that problem and then there’s one Teheran had zero control over. 2018 marked the fifth consecutive year that Teheran got the opening day start – usually reserved for the team’s “ace.” Since the team’s move to Atlanta, Teheran is just the fourth pitcher – along with Phil Niekro, Rick Mahler, and Greg Maddux – to start at least five opening days. Teheran is the first pitcher since Warren Spahn did it with the Milwaukee Braves to start five consecutive opening days. Let’s revisit some of those names, shall we? Niekro, Maddux, Spahn. What do those three players have in common? A level of excellence and an eternal spot among the game’s greatest in Cooperstown.

Teheran is not headed to Cooperstown unless he has one magical-as-hell second half of his career. And while Teheran has been the opening day pitcher in five consecutive seasons, he’s only been the team’s best starter twice. The opening day gig has been more an award for his durable consistence and lack of other options rather than truly excellent pitching.

Is he overrated? Not to me. I had higher hopes for Teheran than this when he broke in back in 2013 and that hope was both rewarded and increased by his first two seasons. But four years later, I have a pretty good idea of what Teheran is and isn’t. I don’t overrate him and I don’t think anyone in the game truly does as well. He’s neither overpaid, nor overrated, but should the Braves move on?

And this is where the other side of the argument loses me. I agree that Teheran is a relative bargain and I even agree that trading him could lead to a sell-low situation where the Braves, just to shed his salary, don’t get enough return for the value that Teheran does have. But that’s not stopping me from trying to move the righty and I’ll get into those reasons shortly. But first, I want to point out the any theoretical trade of Teheran does not exist inside a vacuum. The idea is that the Braves would improve the top-end of the rotation (Patrick Corbin is available while intriguing trade options like Corey Kluber would be a great fit). If such a move doesn’t also include a trade of a current rotation member to another team, the Braves will have their new ace-level pitcher – let’s call him Klubin – and a cadre of somewhat-to-fully established arms like Mike Foltynewicz, Sean Newcomb, Kevin Gausman, and Teheran. That’s an entire rotation and we haven’t even talked about Mike Soroka, Touki Toussaint, Bryse Wilson, Luiz Gohara, Kolby Allard, or Kyle Wright. Surely, not all of them will be sacrificed to acquire Klubin. If the Braves add a starter, it makes complete sense to open a spot in the rotation for competition. Hell, even if they don’t, opening up two spots isn’t a crazy idea.

But, again, where the “Teheran’s a bargain” crowd loses me is the idea that the Braves should hold onto him because of his bargain nature. Teheran displays many of the kind of traits the Braves saw in Jair Jurrjens and Tommy Hanson. Decreased velocity, increased inability to record outs, and shorter outings that lead to a tired bullpen rather than a young veteran who eats innings. In 2018, Teheran’s innings-per-start decreased for the second consecutive year from 6.3 IP/GS to 5.7. That’s a tick below the major league average, by the way. Teheran inspired so little confidence that his manager, Brian Snitker, wouldn’t let him go beyond 100 pitches. Only a handful of times did he see triple digits in 31 starts. You might say that’s the way the game is played nowadays, but with the same manager in 2017, Teheran threw at least 100 pitches 13 times. In 2016, it was 18. And even in 2018, Foltynewicz reached the mark 16 times while Newcomb did 12 times. Snitker gets a lot of blame for going to his bullpen too early, but the NL Manager of the Year had more confidence in two youngsters over his seasoned veteran.

Interestingly, Teheran has remained as effective as he’s ever been deep into games. During the first four full seasons of his career, Teheran limited hitters to a .317 wOBA following the second time through the order. Some hate this split because they want to see pitchers go longer and despise the specialist era of bullpens, but if you hand a manager stats that show a significant loss of production after facing 18 hitters, managers are going to be cautious. However, Teheran has an even better opposing wOBA of .312 in that same split over the last two seasons. The problem has become getting there as his innings-per-start and pitches-per-start show. If he weathers the storm during the first four innings, you feel good about Teheran’s start. If he wavers, you better get the pen ready.

The big picture of Teheran remains that he’s not a bad pitcher, just not a particularly great one. And that last fact is what makes Teheran’s spot in the 2019 rotation so questionable. Is Teheran a better bet to perform around league average and throw 170-200 innings in 2019 than Kyle Wright, Bryse Wilson, Touki Toussaint, or Mike Soroka? Yes, he’s a better bet for that low expectation. But each of those four pitchers – and there are others – are better bets to pitch even better than that. That might be confusing, but rookie pitchers sometimes need a year or two to “get it” at the major league level. Teheran gets it right now. He’s not going to embarrass you in the rotation. But his ceiling is extraordinarily low while the rookie starters, who do have more risk, have much higher ceilings.

It’s not that the Braves HAVE to get rid of Teheran. It never has been.

But just because in a vacuum, he’s a bargain doesn’t mean the Braves need to keep him. They should absolutely aim higher than the 4.89 FIP with a 4.23 ERA they have seen the last two years. Teheran was a solid Brave throughout his career and helped stabilize the rotation during the rebuild. I refuse to be upset that the Braves didn’t deal him after a productive 2016. But now, he’s holding a spot that could go to a pitcher with a much brighter future.

It’s just time to move on.