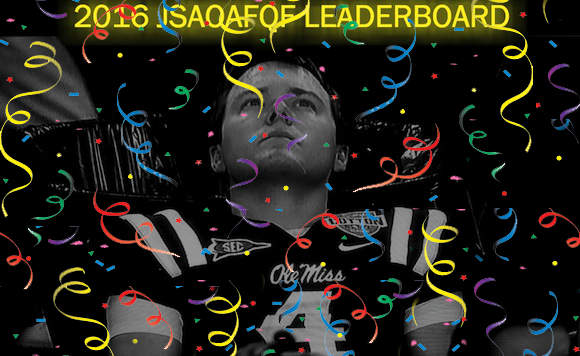 Put on your finest tracksuit and gather around the glowing screen, the final numbers are in for 2016 and we finally have a winner of this year’s Jevan Snead Award For Outstanding Achievement In The Field Of Quarterbacking Failure. The results were delayed for over a week, not due to hollerin’ and recount petitions, but to give our accounting firm* time to sort through the weeds of TWO tiebreakers.

*They bus stop bench ad said they were the TurboTax of accountants who work out of their cars.

Before we get into the tie breaker breakdown, let’s take a final look at the leaderboard after 13 weeks of heated, throwing-it-to-the-wrong-team action. If you recall, Josh Dobbs had a two-interception lead on the field heading into the last game of the regular season. While his team would delightfully lose to Vanderbilt, Dobbs did not record any interceptions. Austin Allen took advantage of this by throwing two against Missouri in Arkansas’ spectacular collapse the Friday after Thanksgiving (you just can’t go up 24-7 on Missouri at half and expect to cruise on home).

With both combatants locked in at 12 interception each at the close of the regular season, we turn to the tiebreaker system. Our first tiebreaker is to look at the number of interceptions each quarterback threw against non-Power Five teams. This allows us to see who was worse against the worst competition.

The score after the first tiebreaker:

A BATTLE TO THE END.

The second tiebreaker focuses on SEC games only. Which of these two fine sirs threw the most interceptions over eight conference games?

STAND AND BE RECOGNIZED, AUSTIN ALLEN. YOU ARE THIS YEAR’S JSAOAFQF WINNER. Allen’s name will be hoisted into the rafters and smashed into plaques across the land, where he will join this group of legends:

You’ll have to talk to those guys, Austin, but I’m sure they can set you up with some kind of matching blazer.

To be fair, Allen was asked to throw 51 more passes than Dobbs, which means Dobbs, who averaged about 26 passes a game, would need to play two more games in order to have an equal number of pass attempts. While that show would’ve been maximum viewing pleasure, life remains unfair.

Finally, just because I took the time to look it up, one final look at our weekly Poop Passing Winners.

One final two-for-one deal, with a quarterback from each division. If you’ve been following along all season, and I know SEVERAL of you have, we closed out the season with 11 straight weeks of an SEC quarterback not breaking 6.5 in QBR. A tip of the hat to all contributors.

Jake Bentley’s 4.9 and Jeremy Johnson’s 4.8 may be ignored by history, but they shall always be remembered here for keeping the flame of miserable quarterbacking lit. God bless you, gentlemen.