Calculating How Many Waffle Houses Auburn Ran For Against Arkansas 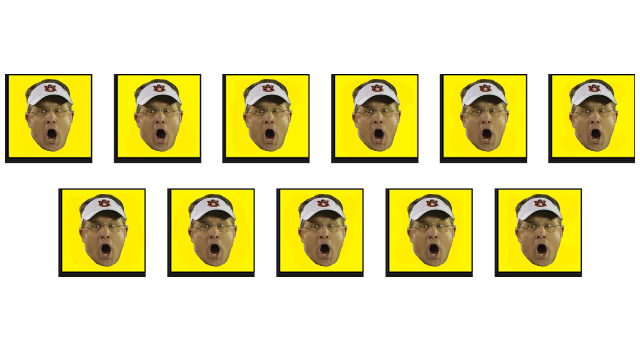 If you missed the show Saturday evening in exotic Lee County, Alabama, you should be made aware that Auburn Jesus, while not showcasing his powers in this season just yet, is now in a position to wreck some team’s belief that they will beat the Tigers when leading by 21 with 3 minutes to play. Auburn, who was essentially written off as a team that would have a new head coach in 2017, has risen (#blessed) and now looks like they could be in position to finish in the top half of the SEC West, and possibly force Alabama into a one-touchdown win over a conference opponent, rather than the standard issue three-touchdown win.

Against Bert’s Berters from Fayetteville, Auburn ran for 543 yards (5! 4! 3!) on 57 carries, which comes out to NINE POINT SEVEN YARDS PER CARRY, but is still 8.1 yards behind Leonard Fournette’s 17.8 yards/carry against Ole Miss (WEAK EFFORT, RAZORBACKS). Unlike Fournette, Auburn almost gained a first down every single time they ran the dang ball.

Based on 15 minutes of real, solid research, I discovered that your average Waffle House is about 1600 square feet*. As we all know thanks to life leading us into one of these establishments, these buildings are typically very narrow and long. A normal free-standing Waffle House is somewhere in the neighborhood of 20 feet wide and 80 feet long.

Using that measurement of 80 feet, we’re going to determine how many Waffle Houses Auburn ran for against Arkansas. At this point, I would like to pause and apologize for violating our standard policy of no math.

That’s approximately 20.4 Waffle Houses that Auburn dropped on Arkansas. Those 20.4 buildings contain enough delicious greasiness that they could help fuel an Auburn vegetable oil plane for up to five clandestine trips to meet with employed head coaches, should things go south again for Gus Malzahn.