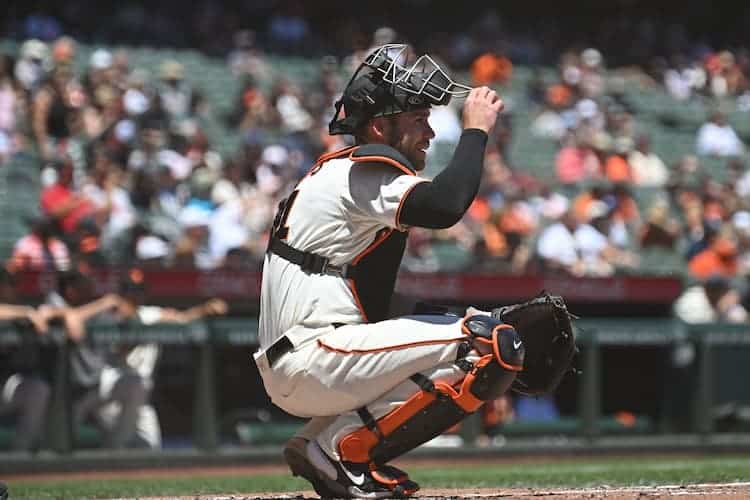 The San Francisco Giants and Philadelphia Phillies made a trade last week. On Wednesday, the Giants acquired catcher Austin Wynns of San Diego, California for left-handed minor league pitcher Michael Plassmeyer of St. Louis, Missouri and cash according to Baseball Reference. At the time, the Giants made the move to acquire Wynns because they sent down catcher Joey Bart to Sacramento.

Ok, it has been a small sample size, but so far Wynns has made the most of his opportunity with the Giants.  He is batting .417 after four games. In 12 at bats, Wynns has had five hits, and collected one double, one run batted in, one walk, and scored one run. He has an on base percentage of .462 and a slugging percentage of .500.

Wynns began the 2022 baseball season in Triple A. He signed with the Phillies on March 19, 2022, after three seasons in Baltimore with the Orioles, but never played for Philadelphia. In 33 games this season with the Lehigh Valley IronPigs, Wynns batted .365 with three home runs and 20 runs batted in. He had 38 hits in 104 at bats.

Struggles with the Orioles

During his three seasons in Baltimore, Wynns only batted .216, and only .185 in 2021. However, the Giants scouting department obviously liked what they saw of Wynns in the highest minor league system in the land, and decided to demote Bart and acquire a backstopper who has not had prolific offensive numbers–until now.

Bart was not very impressive at all this season for San Francisco. Prior to his demotion to Sacramento, he was only batting .156 in 90 at bats. The .156 batting average was down from the .333 average in two games in 2021.

The Phillies are hoping a change of scenery will help Plassmeyer. So far in 2022, the southpaw was terrible with Sacramento, as he was 0-6 with an earned run average of 7.38.

It started out a tough month for the Phillies as they lost Jean Segura three months with a broken finger. They then fired manager Joe Girardi, and replaced him with Rob Thomson, who has since been 9-1 with the Phillies. Philadelphia is now 31-30, and third place in the National League East. The Phillies’ odds of winning the World Series according to betonline.ag are +3300.

San Francisco is still in the hunt in the National League West. At 34-26, they are three games back of the Los Angeles Dodgers and San Diego Padres for the division lead. Their odds of winning the World Series according to betonline.ag are +2800.