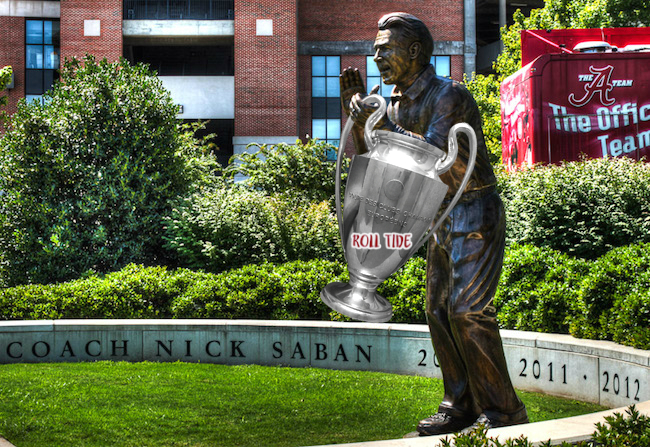 Despite having never played in or won a game at Bryant-Denny Stadium, international soccer god Cristiano Ronaldo spent part of his Wednesday receiving praise and honor from Portuguese officials. Ronaldo, who is from the island of Madeira, was back home for a ceremony in which the airport was named after him and a bust of his likeness, which was sort of like if a bust tried to make another bust, was revealed. Well, at least the sculptor isn’t melting down.

This isn’t the first time the finished products of statues or busts have landed, skidded off the runway, and clipped the air traffic control tower, nor will it be the last. I mean, at some point, someone is going to have to make a statue of Nic Cage with either the Constitution in hand or wearing the helmet thing that’s filled with bees. I just hope it’s not me.

You may also recall the unveiling of the Nick Saban statue after he brought home Alabama’s 45th national title. While not necessarily a wreck, it’s a bit unsettling.

Which brings us to the only logical conclusion that can be reached when considering these works of art: Could we improve the Saban statue and Ronaldo bust by switching them, and what would happen if we did? This sounds like an excellent senior thesis for some the youths out there. Still a little creepy and uncomfortable? You bet. But has Alabama football ever been this beautiful and handsome? NEVER.

I don’t know what Coach Ronaldo would mean for more national titles, but PAWL, HE’S JUST SO DARN GOOD LOOKING. IT’S EASY TO FORGIVE HIM WHEN HE GETS AWAY FROM RUNNING THE DANG BALL.

And Saban goes to Portugal. While furious about the beauty of Madeira distracting everyone from The Process, he looks like he’s getting things done. Perhaps after he wins a third consecutive World Cup for Portugal, a European Championship or two, and several Champions League titles, he might hustle down to the beach and take a look at the ocean.

But not too long of a look because that will cost him 10 minutes of recruiting time.