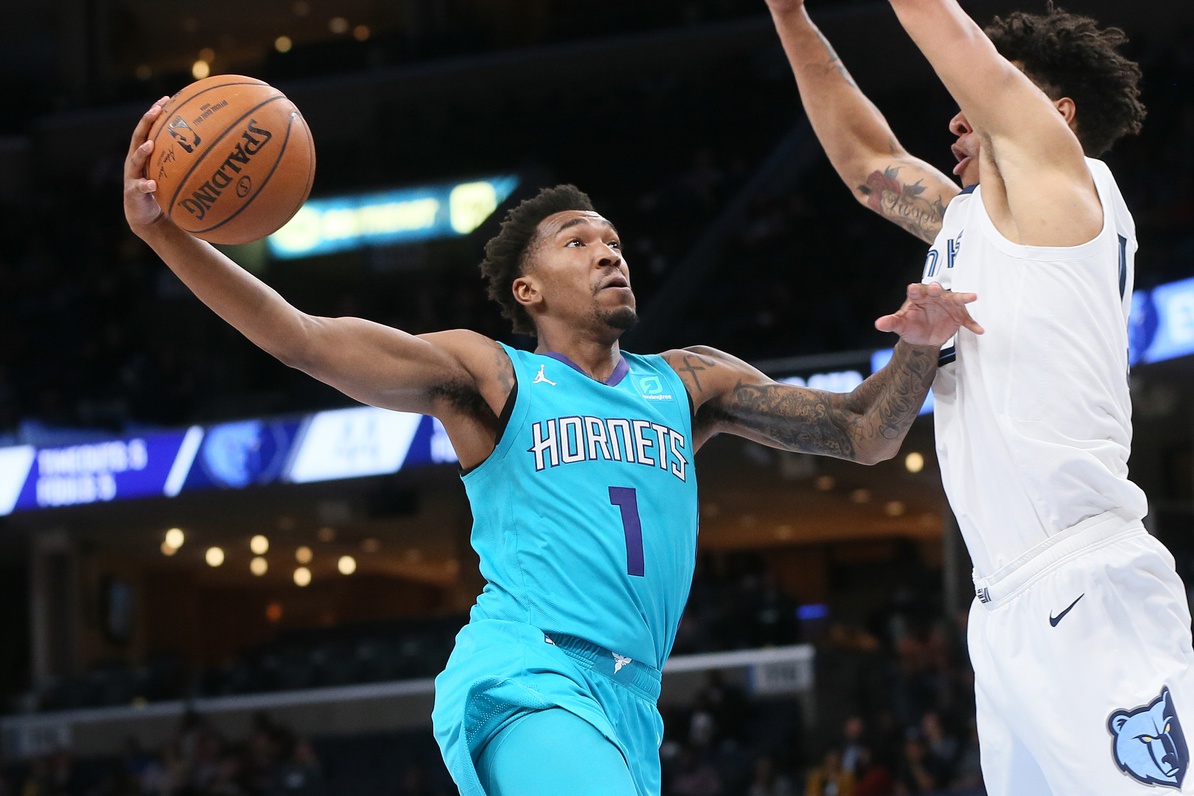 The term X-factor is vague enough that it allows me get away with picking almost anyone for each respective team. The rules are simple though: no first or second-year players, and no touching of the hair or face. And that’s it. So without further ado, here are your Eastern Conference X-factors, the players to keep an eye on for one reason or another that will tilt their respective teams in a positive or negative direction depending on their individual development. As usual, the projected lottery clubs receive more consideration, while the projected playoff squads are limited to a couple lines.

Set to replace last year’s glue guy (Dewayne Dedmon) as Atlanta’s starting center, Alex Len is the X-factor for the Hawks this season. Entering the final year of his deal, the soon-to-be unrestricted free agent is one of the many former castoffs from the Phoenix Suns. Now 26 years old, the Ukrainian big man posted a career-high points average (11.1) to go along with 5.5 rebounds, 1.1 assists, 1.0 trey, 0.9 blocks and 0.4 steals in 20.1 minutes per game in his first year with ATL. He also sank 74 threes on a career-best 36.3 percent across 77 tilts, this after combining for six makes on 24.0 percent through his first five years. That’s not a typo. That’s a stretch big man in the making. On the other hand, he failed to log double-digit double-doubles (nine) for the first time since his rookie year. And for those expecting another leap from deep, the fact that Len shot just 64.8 percent from the charity stripe, a noticeable drop-off from his career mark (69.5), doesn’t inspire confidence. More importantly, Len’s defensive development, or lack thereof, is arguably the biggest swing skill for the team this season, one that could tilt them toward an earlier-than-expected playoff berth or another 50+ losses.

Larry Nance Jr. isn’t just the son of his Hall-of-Fame father. The 26-year-old big man is a player in his own right. In his first full season with the Cavaliers last year, Nance notched career-high per-game averages in scoring (9.4), rebounding (8.2), assists (3.2), steals (1.5), made threes (0.5 per on 33.7 percent shooting) and minutes (26.8). He made 33 threes after making 13 through his first four seasons, but more impressively he more than doubled his previous career high in dimes (1.5 per game in 2016-17). Kevin Love could end up being traded and Tristan Thompson turns 29 in March. Like Alex Len, Nance probably isn’t meant to man the five full-time on a team built around a weak defensive guard (or two), but he’s locked into his current contract through the 2022-23 season, so it’ll be interesting to see if he builds on last year’s strong showing and takes another step forward in 2020.

Malik Monk is the guy to keep an eye on in Charlotte this season. Through two years he hasn’t done much of anything to inspire confidence. But those memories of Monk making shot after shot at Kentucky still linger. On a team as bad as the Hornets, it is not surprising that Monk will crack the regular rotation this season, this despite averaging just 7.9 points (on 37.6 percent shooting) in 15.5 minutes across 136 career appearances. Giving up on a former lottery pick (11th in 2017) who showcased the ability to put the ball in the basket from anywhere, at least at the college level, isn’t something CHA can get away with. It’s safe to say at this specific point and time that Monk is lucky he’s a Hornet. There aren’t a lot of other squads where he’d still be in the mix for consistent minutes. Will he make the most of them?

The Bulls are being hyped as a potential playoff team, including by yours truly. It’s a deep, talented club with the potential to be better than the sum of its parts. And it all starts with Zach LaVine. LaVine exploded last season, posting career-high averages of 23.7 points, 4.7 rebounds, 4.5 assists and 0.4 blocks per game. His scoring surge was accompanied by a rare improvement in efficiency as well, as he sank a career-best 46.7 percent from the field. The uptick in assists was almost as impressive, though LaVine did commit 3.4 turnovers per night. That ratio improved with Otto Porter aboard. In the 15 games that Porter and LaVine shared the floor prior to being shutdown in mid-March, LaVine upped his assist average to 5.3 while (ever-so-slightly) decreasing his turnovers to 3.3. The 24-year-old combo guard still has time and room to improve offensively, particularly his passing and shot selection. The main question for LaVine is whether he’ll address his clear weakness: the defensive side of the ball. Even pretending to give a flying f*** would be a great start, and enough to catapult him into his first All-Star appearance.

Luke Kennard is coming off a modest sophomore season that saw him up his averages across most counting stats while more or less maintaining his efficiency (less, but barely). However, Detroit needs him to make a more sizable leap here in year three. Points per game is rarely the ideal standard for measuring improvement, but in this case that’s exactly what I’m looking for. Kennard needs to not just break through the double-digit barrier (9.7 ppg in 2018-19), he should try to shatter it. If Blake Griffin can’t stay healthy it’s going to be a depressing year in Detroit, but if he can Kennard needs to become that super reliable three-point shooting threat that Griffin or Andre Drummond can kick the ball out to off of drives or offensive rebounds. If Kennard is going to make a name for himself beyond being the guy that was drafted before Donovan Mitchell, the sweet-shooting lefty will probably need to step up and score 15+ points per game in 2019-20. Is he up to the task?

Dennis Smith is essentially where Elfrid Payton was last year in NOLA. Whether Smith knows it or not, this could be his last chance to prove he’s a starting-caliber point guard in the NBA. Payton bounced from Orlando to Phoenix to New Orleans and now New York, and he’s still yet to prove he can exist in a complementary role offensively, thanks in large part to his shortcomings as a shooter. (For those of you saying: “but what about Frank Ntilikina? He’s from the same draft class as Dennis. Don’t you know that?” Yes, I’m fully aware of Frankie Smokes, but Ntilikina’s combination of size, defensive versatility and offensive potential mean he’ll keep getting chances to prove himself even if he has another poor campaign. Sorry, that’s neither here nor there.) Unlike Payton in his previous stops, Smith cashed in catch-and-shoot threes at a solid clip in Dallas, but he’ll be put to the test again in that regard playing next to rookie R.J. Barrett. While not to the same extent as Luka Doncic, Barrett is a prized prospect with the size of a forward and skillset of a guard. The expectation is almost certainly that R.J. is the future of the franchise, so DSJ will need to fall line; but that didn’t happen in Dallas.  If Smith wasn’t willing to cede the spotlight to Doncic, why would he step aside for Barrett? Regardless, the clock is ticking for the former lottery pick.

I remember watching Thomas Bryant when he was an Indiana Hoosier. Thomas the Tank Engine scratched the Myles Turner itch for me then, and he still does. After transforming his body last summer, Turner was arguably the most overlooked defensive player in the league last season. Not since 2013-14 had the league leader in blocks been omitted from both All-Defensive teams. In all likelihood that isn’t in the cards for Bryant, but at least it proves it’s entirely possible for a big man with somewhat awkward footwork to improve. Bryant is already Washington’s second-best player behind Bradley Beal, though considering the rest of the roster that isn’t saying much. He held his own against Joel Embiid in last Friday’s preseason finale, and his instincts defensively have always been pretty decent in my opinion. If Bryant builds on his breakout performance in the second half of last season, Beal will have $72,000,001 reasons to feel good about his recent contract extension.

Ditto Taurean Prince re: securing the bag. Can he make serious strides defensively on a team that may be starving for wing stoppers?

We know T.J. Warren can score, and judging by the preseason his improvement from beyond the arc last season isn’t a mirage. But playing for a Pacer team that lost their best defensive forward in free agency (Thaddeus Young), will Warren step up to the challenge on that end?

Derrick Jones Jr. is proof that from a player development standpoint Miami is a top-flight organization. How well-rounded a player can Jones become? Is this the year he officially sheds the “just a dunker” label?

Pat Connaughton was sneakily effective last season and just might be the best bet to replace the loss of Malcolm Brogdon. It’s a tall task that will need to be handled collectively for sure, but ultimately only five Bucks can be on the court at any given time.

Markelle Fultz remains a mystery box for the Magic and an enigma to everyone else. After drafting injured Auburn forward Chuma Okeke instead of reaching for Carsen Edwards in the 2019 draft, the Magic are still accepting applications for their point guard of the future.

There’s no way around it. With J.J. Redick no longer around, the Sixers need as much shooting as they can get to complement the likes of Joel Embiid and Ben Simmons, and Furkan Korkmaz has been patiently waiting his turn. Can he rise to the occasion?

Norman Powell reappeared seemingly out of nowhere during last year’s playoff run and didn’t disappoint. He was a bench warmer for the majority of the last couple years, but perhaps he’s the most likely Raptor to step in and fill the void along the wing.