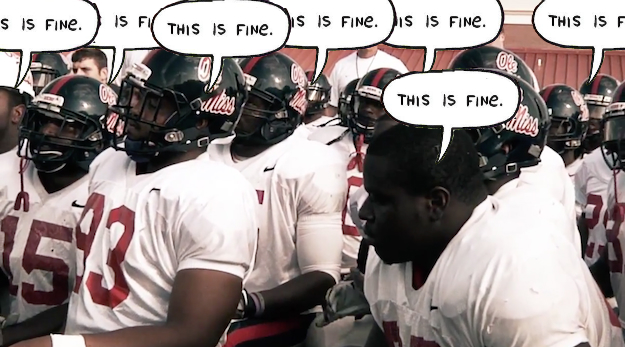 Way back in 2011, a time before news was fake and sad(!), Houston Nutt was searching for some sort of an analogy to address his Ole Miss team prior to practice in the fourth week of the season. The previous Saturday, Ole Miss was crushed 30-7 at Vanderbilt, dropping their record to 1-2, with the lone victory over Southern Illinois, all of which was on the heels of a horrific 4-8 season in 2010.

Nutt, sensing things could be about to go off the rails, crash into a fertilizer plant, explode, and leave the land barren and full of waste, tried to rally his team as they prepared to play Georgia. He spoke of unity, effort, how they needed each other, and a journey to a city in ancient Mesopotamia that sits on the Tigris River.

These are the faces of those who were present for the Hepper of Heppers’ speech about being drafted, Baghdad, and foxholes. Ole Miss would go on to gain 183 total yards and collect 8 first downs in a 27-13 loss to Georgia. The following week, they would defeat Fresno State in Week 5, marking the last win of Houston Nutt’s coaching career.