JSAOAFQF Standings As We Head Into Judgment Week 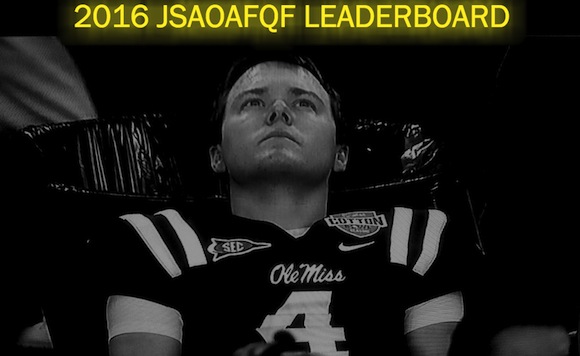 Officially two weeks behind schedule because that’s how this operation runs, we have our final look at the leaderboard for the Jevan Snead Award for Outstanding Achievement in the Field of Quarterbacking Failure before our winner’s name is carved in stone so that all creation may be able to gaze upon his mighty works. Since our last visit in this space, the competition has turned into a four-way battle as JUDGMENT WEEK DESCENDS UPON THE LAND.

Even though Josh Dobbs maintains the lead he has held nearly all season, Nick Fitzgerald, Austin Allen, and Drew Lock have decided he’s not just gonna be able to walk through the last week of the regular season and win this award. However, things don’t look promising for Fitzgerald, Allen, or Lock to run Dobbs down.

Dobbs faces a Vanderbilt defense that is a legitimate defense, while the second-place trio faces the defensive collection of Ole Miss, Missouri, and Arkansas, all of which are classified as defenses only because they take the field when an opposing offense has the ball. Though the odds of a come-from-behind victory are long, THROW OUT THE EXPECTED DURING RIVALRY WEEK, BOB, NO MATTER IF THE RIVALRY IS REAL OR THE PREFABRICATED HOME RIVALRY OF ARKANSAS AND MISSOURI.

We also want welcome Luke Wright, Jake Bentley, and Shea Patterson to the big board. With the addition of those three quarterbacks, Ole Miss, Kentucky, and South Carolina now have three players on the leaderboard. WELL DONE. Sean White’s Week 11 effort belongs in the bad quarterback performance museum I will build one day (taking donations now!). Not making it to two yards per attempt is something not even Auburn legend Chris Todd was able to accomplish. And White topped it all off with a 1.0 QBR.

One week later, Austin Appleby delivers this 2.4 QBR gem. Even more amazing is this was good enough to win a college football game in Baton Rouge. BUT ED ORGERON CHANGED EVERYTHING ABOUT THE OFFENSE (pls pls pls pls pls give him the job.

LET THE DELIGHTFUL HORROR FILL YOUR HOME WITH ITS AROMA.