That’s a Charger/Raider memory that can replace the one from last season. Good to be back, FAITHFUL READER. It’s been quite some time, I know. Nothing has really changed for the Chargers since the last time we spoke. Sure, the hype train is building, but we know how little that means. I would expect that Bills fans feel the same way right now. Being #1 in the “Power Rankings” is as hollow an honor as there is. I did see a Twitter poll whether Staley would/could be be fired if the team misses the postseason. That may also in response to the Sean Payton rumors. I have no inside information, but Telesco would be closer to getting the ax than Staley if we can’t even make the playoffs. He will have been here for almost ten years at this point. 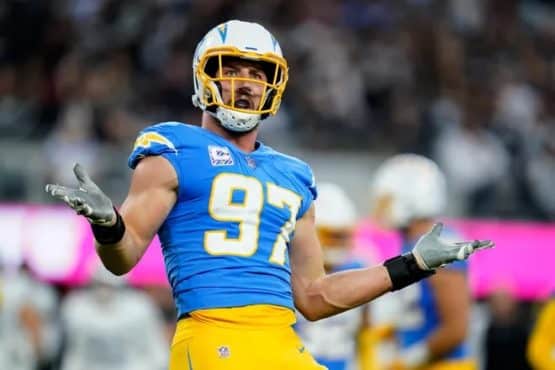 Now if the reason the Chargers can’t even get into the postseason is due to some Staley decision, I guess that’s a different story. Regardless, I don’t think Payton or any NFL coach is a lock. Parcells, Johnson, Gruden, guys who have been successful in one place aren’t necessarily going to lead another team to a Super Bowl. Parcells was instrumental in turning around the Jets after the Giants, I know. Nonetheless, the Chargers absolutely need to make the playoffs this season. I would argue that it’s Lombardi Trophy or bust, but that’s just based on 40 plus years of being a Bolthead. The offseason acquisitions have been great. We can’t say that they are just being complacent as usual. Letting Chenna and Kyzir walk seemed to be a product of the defense that Staley wants to run, though his comments suggest he would have preferred to keep White. We don’t know what the real hierarchy is with the Chargers. I hope we don’t need to find out anytime soon who is the most fireable.

10 days until training camp? That is pretty jarring. Are you guys ready? I’m not sure, either. However, I plan to be at the Chargers/Browns game in Cleveland Columbus Day weekend. That would be my third such trip. It would have been four, but I backed out during Hurricane Sandy. If you remember that game, with Robert Meachem dropping an easy touchdown, you know I really lucked out not going. That’s all for now. The good folks at BettingPro.com are now running the Sports Daily platform where there was once MVN, Bloguin, etc. But if JIC ever moves out, I’ll let you know.
Until next time.
JIC,
RLW