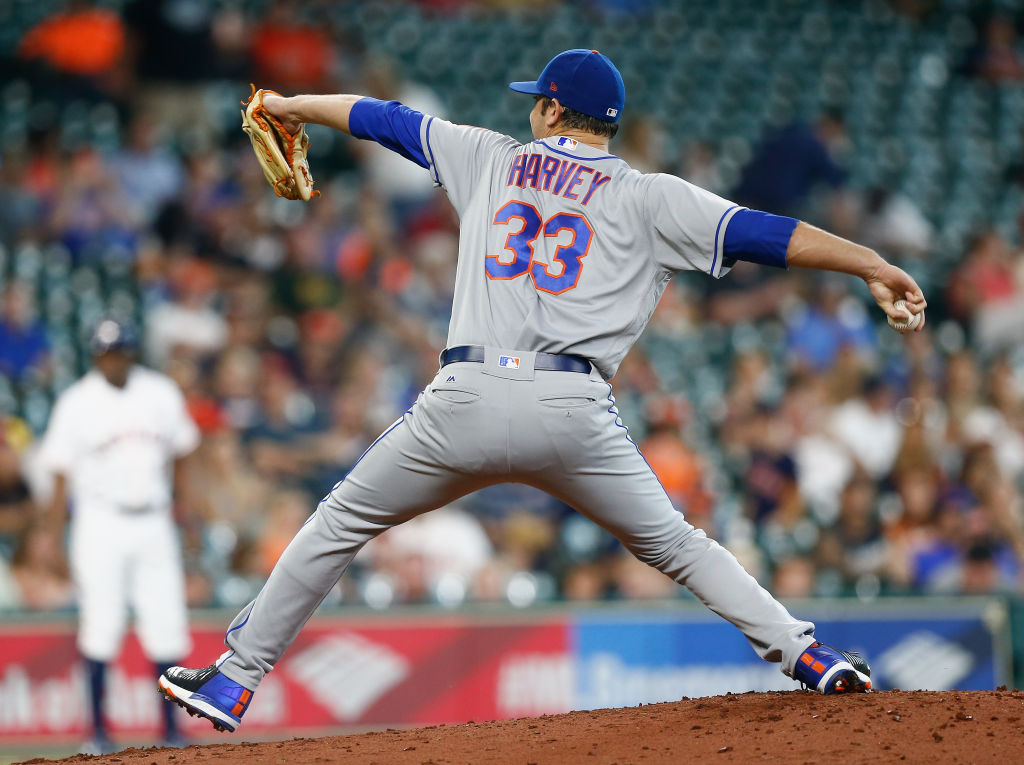 The New York Mets were going to need a starter for Wednesday after Friday’s game with the Houston Astros was pushed back a day. With the season all but over, there was no reason to bring anyone important back on short rest, with perhaps the simplest move being to drop Tommy Milone in the rotation for the day. The Mets decided against the conventional course of action with a move that ranks right up there with the dumbest decisions they have made this season. The new plan is to bring back Matt Harvey on just three days of rest, Newsday’s Marc Carig reports, since the right hander wants to get back on the mound as soon as possible.

HOUSTON, TX – SEPTEMBER 02: Matt Harvey #33 of the New York Mets pitches in the first inning against the Houston Astros in game one of a double-header at Minute Maid Park on September 2, 2017 in Houston, Texas. (Photo by Bob Levey/Getty Images)

Harvey returned from the disabled list on Saturday against the Astros and looked awful, giving up seven runs in two innings of work. It was not a great return for Harvey, who missed two months of work with a stress injury to his pitching shoulder, and his fastball never topped 94 miles per hour in the contest. Harvey only threw 70 pitches in the contest, meaning he should theoretically be able to pitch tomorrow without issue, and that is exactly what the Mets plan to do. Mets’ manager Terry Collins indicated that the plan was to give Harvey the ball tomorrow since “he wants to get back out there as quick as possible.”

This idea is extremely dumb. Harvey has already undergone Tommy John surgery in his career and has dealt with various health problems since the end of the 2015 season, including surgery to address Thoracic Outlet Syndrome after the 2016 season. The Mets have also seen that Harvey hasn’t looked the same since Game 5 of the 2015 World Series, so the most logical course of action is obviously to send out a pitcher with a history of arm problems out on three days rest in a meaningless September season. This isn’t a situation where Harvey is pitching well or one where the season is on the line. The Mets are having Harvey pitch on three days rest in a September game against the Philadelphia Phillies simply to let him get the bad taste of Saturday’s start out of his mouth faster.

Even if Harvey feels fine, the Mets have to be the grown ups in the room and recognize a bad idea. Letting Harvey pitch on three days rest now does nothing but capitulate to Harvey and could put him at risk for more arm trouble. This is nothing against Harvey, who is a competitor and wants to get back out on the mound to try and help the Mets win games. The Mets simply need to protect Harvey from himself and not let him make unnecessarily risky decisions.