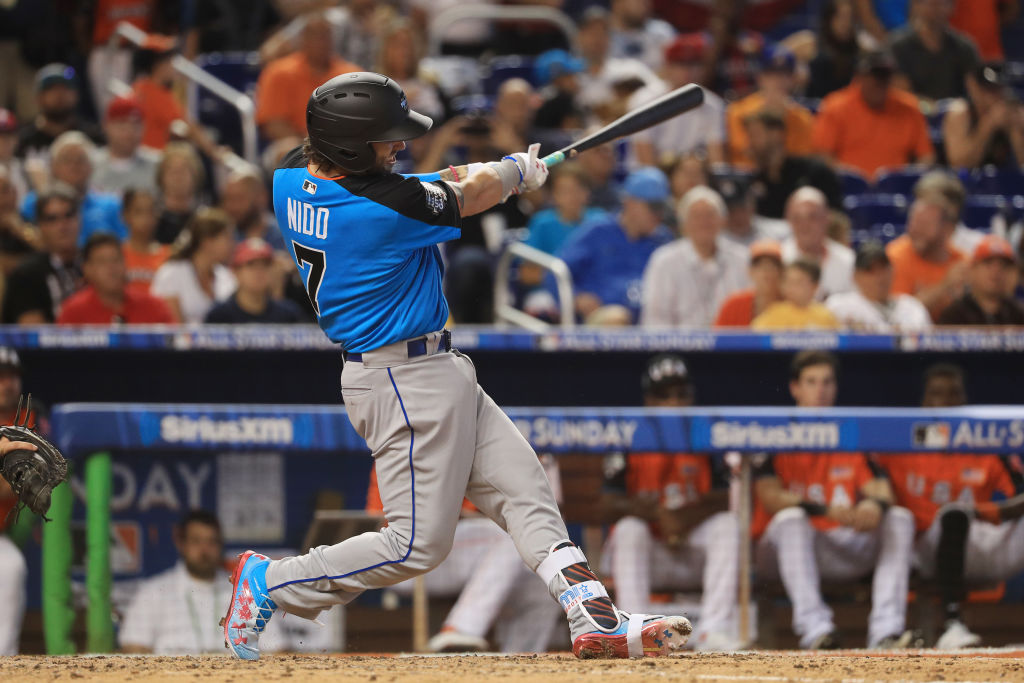 Now that the 2017 season is over for the New York Mets, we have been looking back at the year that was. After taking a more general view of the offense, pitching, and coaching staff, it’s time to take a look back at the Mets’ players. This series will take a look at every player on the active roster for the Mets at the end of season from A (Nori Aoki) to W (David Wright). The review will look at their season statistics, stories, and what role (if any) they will have next season. We continue our series today with a look at catcher Tomas Nido.

MIAMI, FL – JULY 09: Tomas Nido #7 of the New York Mets and the World Team swings at a pitch against the U.S. Team during the SiriusXM All-Star Futures Game at Marlins Park on July 9, 2017 in Miami, Florida. (Photo by Mike Ehrmann/Getty Images)

Story: After winning a batting title for High-A St. Lucie last season, the Mets decided to put Tomas Nido on their 40 man roster to protect him from the Rule V draft. Nido didn’t make a strong impression in spring training, so the Mets assigned him to AA Binghamton to start the season. The jump from Single-A to AA was tough for Nido, as he hit only .232 in 102 games for the Rumble Ponies, but he was still thought highly of in baseball circles. Nido earned an invitation to the All Star Futures Game in Miami, and he impressed there by going 2 for 2 with a pair of RBI’s for the World team. The Mets decided to promote Nido to the major leagues in September, where he served as the third catcher for the season’s final month. Nido only got into five games, but he did collect three hits in ten at bats, including his first big league RBI’s.

It’s not fair to grade Nido after only five games of big league action, although he did show some promise in his limited opportunities.

Nido, who has excellent defensive skills, has a chance to be the Mets’ catcher of the future. The Mets appear committed to giving the platoon of Travis d’Arnaud and Kevin Plawecki another year behind the plate, so Nido should start the season in Triple-A. Nido will likely spend the majority of the season there and could be a factor in the team’s 2019 plans depending on how d’Arnaud and Plawecki perform.