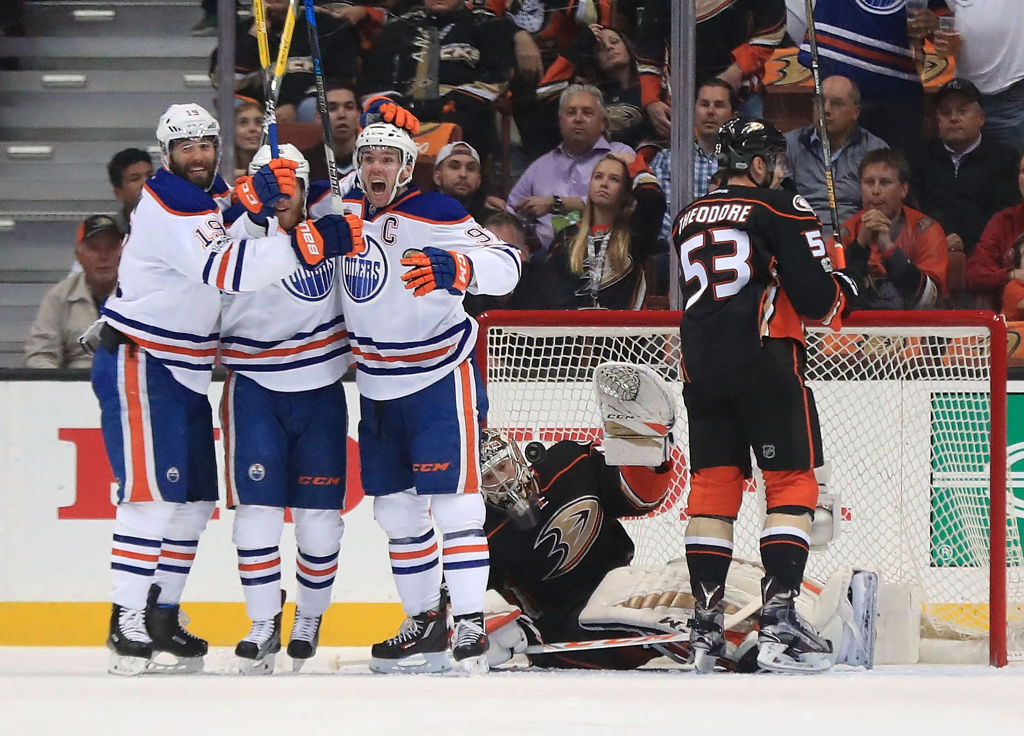 Merry Christmas and Happy New Year. We’re just about halfway through the 2017-18 NHL season. Let’s catch up with a few former University of North Dakota hockey players and see how they’re doing. So far this season, 18 former UND players have played in the NHL. There are a few more that “should” make their season debut soon.

The NHL’s leading rookie scorer with (20g-14a—34pts), he’s also a minus-one. Six of his goals were scored on the power play. Boeser has scored four goals and five points in his last five games. Boeser has seven multi-point games. Boeser is the sixth rookie since 1991-92 to reach the 20-goal mark within his first 34 games of a season

The comeback continues. #Canucks down 2-1 after 40.

In 25 games with the Oilers, Caggiula has scored (5g-4a—9pts), he’s also a minus-seven. Caggiula has two multi-point games.

Caggiula has missed a few games this season due to injury (concussion, lower-body injury). After being a healthy scratch, he has scored a goal and two points in his last two games. On Wednesday night, Caggiula scored this amazing game-winning goal with 49.8 seconds remaining in the game.

The Drake wins it! #LetsGoOilers pic.twitter.com/4L0n7uOD9O

Chorney has played in 21 games scoring (1g-2a—3pts), he is also a plus-eight. Recently, Chorney has been a frequent healthy scratch, and hadn’t played since 11-25-2017. Finally, after a month of being scratched he played on 12-22-2017 against the Arizona Coyotes.

Currently, Dell is the Sharks backup goalie and leads the NHL in save percentage with .935. In 13 games with the Sharks, he’s 7-3-1, 1.94 GAA and .935 save percentage. Paul Gackle of the Mercury News says that the Sharks should trade Dell because he’s a highly-sought commodity.

During the 2017-18 season, Grimaldi has played the majority of his games with the San Antonio Rampage of the AHL. In 21 games with the Rampage, he’s scored (10g-6a—16pts), he’s also a plus-five.

It’s been an up and down rookie season for the St. Albert, Alberta native. On October 11th, Jost was cross-checked into the end boards by Bruins defenseman Adam McQuaid. On October 19th, Jost was injured again and missed 14 games due to a lower-body injury.

Carl Soderberg slams home a rebound from a Tyson Jost shot on the PP against Schneider and the Devils https://t.co/byLwjJdoOE pic.twitter.com/1w7EGgCoKw

Malone has spent the majority of the 2017-18 season with the Bakersfield Condors of the AHL scoring (5g-7a—12pts), he’s also a minus-seven. Malone has been held scoreless in seven games with the Oilers. Malone last played for the Oilers on November 12, 2017.

In 36 games with the Islanders, Nelson has scored (9g-3a—12pts), he’s also a minus-six. It’s been a tough season for Nelson, he’s been held scoreless in the last six games. I’ve been known to play in the daily fantasy hockey games, and one day, while I was selecting my lineup, this came up.

Brock Nelson isn’t a good fantasy Choice. Yet I selected him for today’s contest. pic.twitter.com/TsAqOcZSDh

In 31 games with the Capitals, Oshie has scored (11g-13a—24pts), he’s also even. Recently, Oshie returned to the ice after missing six games with an upper-body. On Friday night, Oshie scored his 11th goal of the season against the Arizona Coyotes.

TJ Oshie scores his 11th goal of the season after a stunning no-look pass by Jakub Vrana pic.twitter.com/ajysHaPOdQ

Parise had back surgery in October and has yet to play a game this season. Parise is back skating with the Wild and should return soon.

Zach Parise was back on the ice for #MNWildafter back surgery and @KrissyWendell joined practice for Minn Wild Girls Hockey Weekend. @theothermegryan explains https://t.co/1Z90SY6bbC pic.twitter.com/tT7I7leGdA

In 10 NHL games, Poolman has scored (1g-0a–1pt). On Saturday afternoon against the New York Islanders, Poolman scored his first-ever NHL goal. Poolman was inserted into the lineup after Dustin Byfuglien suffered a lower-body injury. With Byfuglien’s absence, Poolman has played in the last seven games for the Jets.  Big Buff is listed as week-to-week, so Poolman should remain in the lineup for now.

Rowney is fresh off winning a Stanley Cup with the Pittsburgh Penguins. In 23 games with the Penguins, Rowney has scored (2g-2a—4pts), he’s also a minus-seven. Rowney missed 14 games with a hand injury.

Schmaltz with the dirty no look pass to Kane pic.twitter.com/Wi97sJgcD4

Stafford signed a one-year unrestricted free agent deal with the Devils during the offseason. In 30 games with the Devils, Stafford has scored (5g-3a—8pts), he’s also a minus-10. Stafford is currently suffering through a 16-game pointless streak. Stafford hasn’t recorded a point since November 12, 2017. Stafford was a scratch in the last night’s game against the Blackhawks.

After an amazing rookie season, Stecher has struggle in his sophomore season. Stecher missed 14 games with a knee injury. In 20 games with the Canucks, Stecher has scored (0g-1a—1pts), he’s also a minus-nine.

The 11-year Al-Star forward is third on the Blackhawks in points, scoring (9g-13a—22pts), he’s also a plus-six. The Blackhawks have started the season slowly, “I think that all different pieces of our game is coming together,” Toews said.

Jonathan Toews: "I think all the different pieces of our game are coming together a little bit more." #Blackhawks pic.twitter.com/wrp7E4P8md

Per RotoWorld — Zajac underwent pectoral surgery back in August. Originally he wasn’t supposed to play with the Devils until February. After missing the first 17 games of the season, and ahead of schedule, Zajac made his season debut on November 16, 2017, against the Toronto Maple Leafs.

Since returning from injury, Zajac has struggled to score (2g-0a—2pts) in 17 games. He’s also an even plus/minus.