What is Goalie Interference? 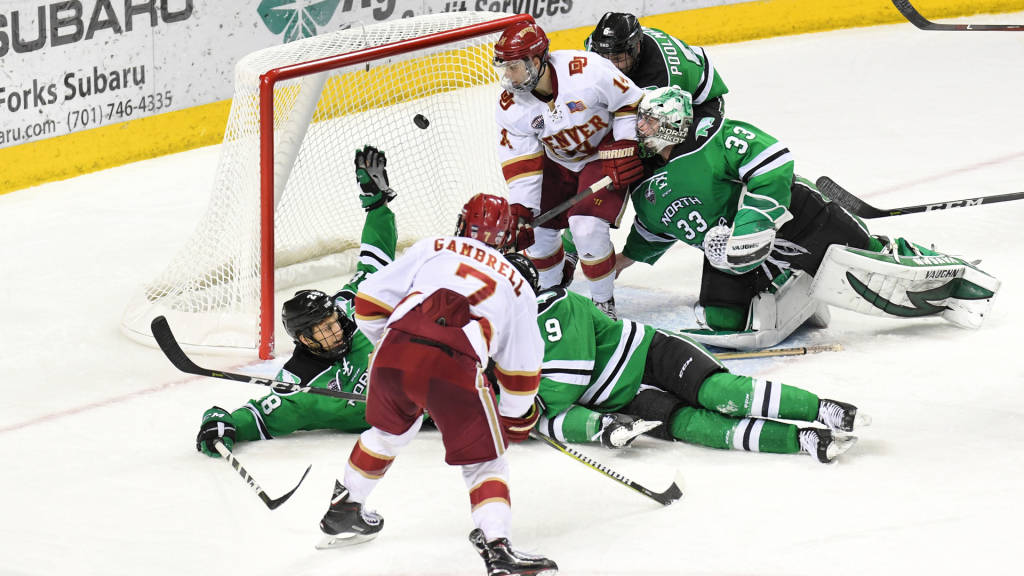 What is Goalie Interference?

(Photo Credit: Russ Hons, UNDSports.com)
Last Friday night, Pioneers and Fighting Hawks. UND was killing a five-minute major penalty for contact to the head. At the 05:29 mark of the third period, Pioneers forward Dylan Gambrell appears to score the go-ahead goal, to give the Pioneers a 3-2 lead. Hold the phone, after very lengthy video review, the on-ice officials ruled that Pioneers forward Jarid Lukosevicius had interfered with UND goalie Cam Johnson. No goal. From the replay that I saw in the press box, I thought it was the right call.

Of course, DU fans weren’t happy with the call. When the refs go into the penalty box to review a goal, no one knows how they’re going rule. I would compare it to a bad version of Jeopardy. Cue the music. It’s basically a crapshoot. You could flip a coin. Obviously, fans of the team that was on the wrong end of the call are going to see the ruling differently than the on-ice officials making the call.

It was a bad call. Puck was over the line before any contact occurred. Lukosevicius didn't impede Johnson from playing his position. But, in the end, it didn't matter since Terry scored almost immediately. https://t.co/upe1RQs5Q9

Last night, there was a few controversial goals that “could” have been ruled goalie interference, they weren’t. During the first period between the Boston Bruins and the St. Louis Blues, this happened.

The on-ice officials reviewed the goal in question and after further review, Krejci had scored the Bruins first goal of the game at 12:32 mark of the first period. I thought it looked like the Bruins Jake DeBrusk interfered with Blues goalie Jake Allen. Blues head coach Mike Yeo challenged the goal for goalie interference, but his challenge fell short. In my humble opinion, the Bruins received an early Christmas present. The play probably cost the Blues a points in the standings.

Of course Blues fans were unhappy with the call. Rightfully so. I think my former Hockey Writers colleague has a point.

Seriously @NHL, can we please just get rid of video review for goalie interference? Fans, coaches, players and GMs don't know what it is and you obviously don't know how to define it. I'd be much more accepting if the refs just called it on the fly. These reviews are atrocious.

That wasn’t it. Last night in Winnipeg, Las Vegas forward Erik Haula picked up a loose puck and scored the Golden Knight’s second goal of the game. During the play prior to the goal in question, Golden Knight’s forward James Neal broke his stick across the mask of Jets goalie Connor Hellebuyck.

After the game, Hellebuyck wasn’t happy with the call on the ice. I think he’s got a valid point.

“What (the official) said is the puck wasn’t covered, it was laying in the crease, so the guy was allowed to take a two-hand smack to my face. I don’t understand it. I think it’s a terrible call,” Hellebuyck told the media after the game. “You would think the video replay is there for that reason. I don’t even think their team wanted that goal. Obviously they’re going to take it. That’s just dirty and I don’t put it on them. That’s hockey. I can take a stick to the face. But just because I don’t throw my head back and make it obvious, I feel like I got kind of screwed on this. This is my fourth goal with my helmet, having an issue with it.

“Goal with my helmet off, goal with my buckle off, goal where a guy trampled me. Maybe I should start diving a little bit, that’s just ridiculous.”

After the recent events, are you confused on what goalie interference is? One suggestion; have another off-ice official review the disputed goals. Also, the NHL’s don’t over think obviously isn’t working.