Logic, And Jerry Blevins Fastballs ... Both Fly Over The Wall 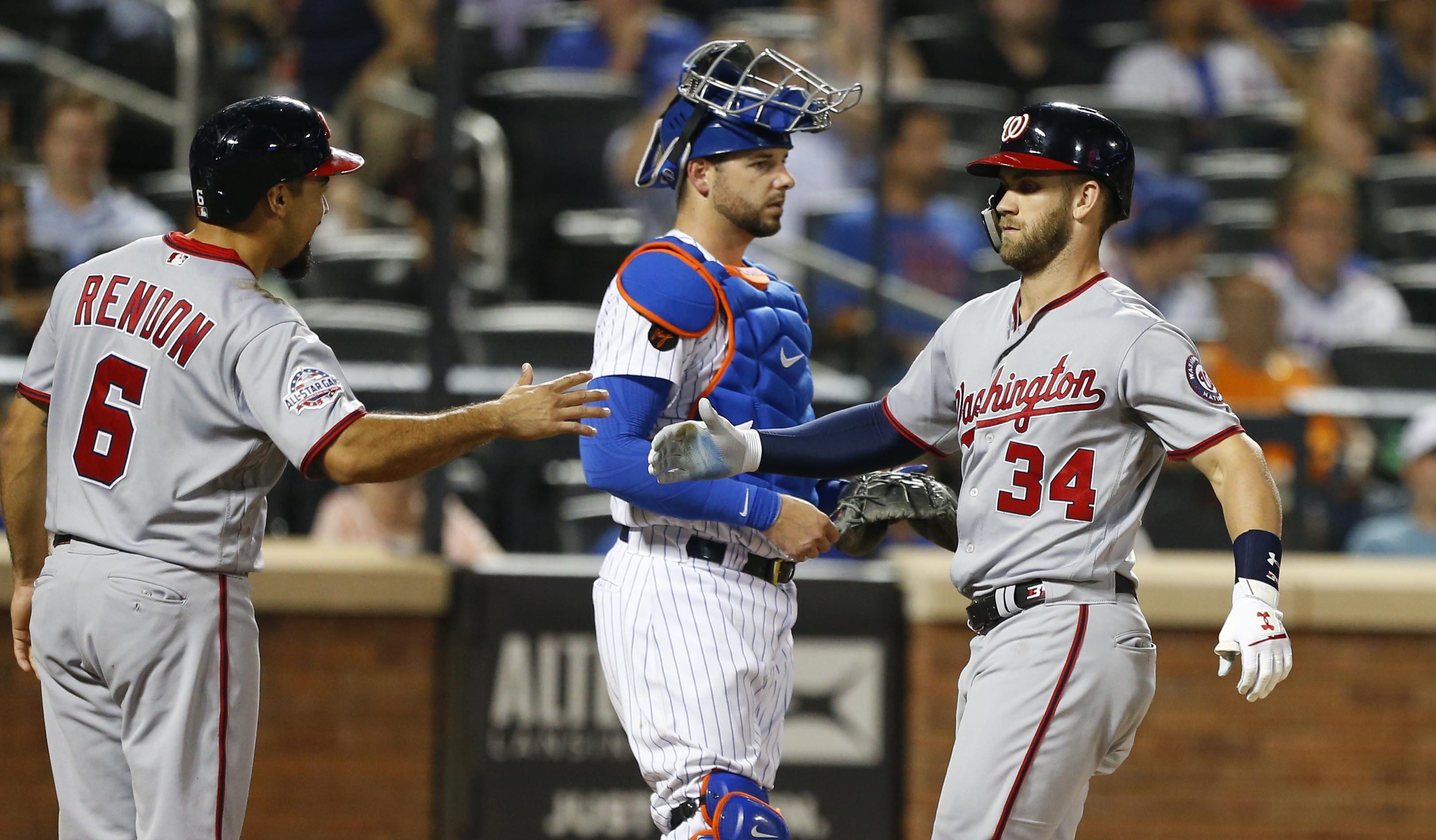 Logic, And Jerry Blevins Fastballs ... Both Fly Over The Wall

The Nationals were 46-46 coming into tonight’s game. They play shoddy defense and their best hitter has looked more like Adam Dunn than one of the most dynamic players in the game today.

And yet, as they play the Mets, they’re still the guy who puts the hand on the other guy’s forehead during a fight while the Mets swing away and punch air. Steven Matz got ambushed by Anthony Rendon, who hit two home runs off Matz and is vying to take the crown as the new Chipper. (If for any reason Freddie Freeman cannot perform his duties …) The two home runs indirectly led to the key moment in the seventh, as Matz was taken out for Tim Peterson with Rendon coming up again. Right move, but unfortunately Peterson gave up a single to Rendon to bring up Bryce Harper with a man on. Mickey Callaway brought in Jerry Blevins.

Nothing illustrates Blevins’ fall from 2017 to 2018 than his numbers against Harper. Until this season, Harper was 2 for 10 against Blevins with a home run and a double and three walks, but he also struck him out three times. Harper drove in two runs in those ten at-bats. This season, Blevins hasn’t gotten Harper out. One walk, one two run single, and now unfortunately a two run HR on a fastball down the middle. It was the difference in a 5-4 loss where two home runs by Kevin Plawecki and Asdrubal Cabrera were window dressing the minute they were hit because Harper hit one to the moon off Blevins.

Blevins was thoughtful afterwards. Talked about being too fine against lefties this season. Trying to make the perfect pitch. He told one reporter when asked what he was trying to do with Harper that he was trying “to not give up a home run”. But the only thing I took from his post game interview is that yoga is at 2:00 tomorrow.

At least the team is centered. (SNY)

Max Scherzer wasn’t his normal self, but he was good enough to win. It would have been nice to see what the former number one prospect in all of baseball could have done against him. But Amed Rosario sat down because he had been playing well.

Mickey says that Rosario is sitting today, in part, because of how well he’s been playing. He’s made noticeable strides in his approach and the team wants to make sure he sticks with it. Against Scherzer, that’s not necessarily the easiest thing to do.

Whoever is writing these excuses for Callaway must be getting paid a lot of money. Because I can’t see anybody in the ownership family being that creative with their reasons for getting Jose Reyes at-bats. Somebody should show Jeff Wilpon the 2015 game log for Francisco Lindor. Played every day. Played most every inning of every game. Faced Chris Sale 11 times. Hit .364 against him. Went 2-for-7 off Justin Verlander. Maybe Callaway can show Jeffy the game log. He was there!

But no, can’t have Amed Rosario bat against Max Scherzer. That’s a great way to develop. This is seriously the kind of nonsense that has me waiting for the tell-all book to come out. There are people that have access to this team that know why Jose Reyes is playing so much. I’d bet money on it. And I’d bet money that it’s a reason that nobody is seeing. I’d also bet you that reason is stupid. It goes against all baseball logic that is possessed everywhere except Flushing.