Sabres Stay Patient and Rally to Defeat the Wild 3-2 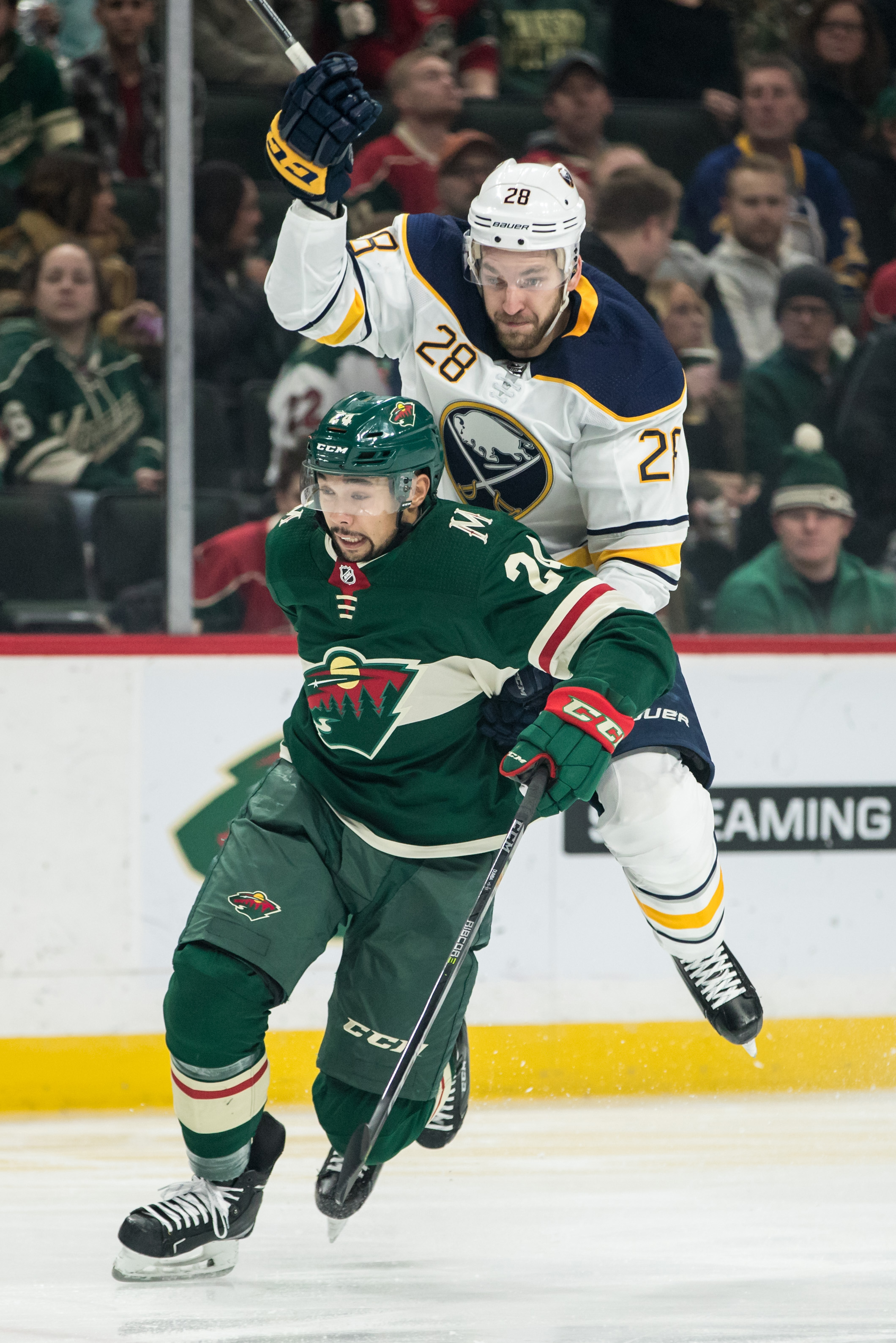 Sabres Stay Patient and Rally to Defeat the Wild 3-2

There was a time where it was a game against the Buffalo Sabres that was the opportunity for the Minnesota Wild to turn its fortunes around.  Not quite true this time as the Sabres are not the league basement dweller they’ve been in recent seasons.  Buffalo has lots of young talent who appear to finally being able to take a step forward to competing for a playoff spot.  The Wild have put themselves in a good spot despite playing in one of the toughest divisions in the league.

There are plenty of local angles to this early evening’s game with Buffalo.  Former players facing their old cub or players returning to the State of Hockey make for lots of outside interest.  The only thing the Wild should focus on is winning this game.  Can Minnesota earn another important victory on the 1st half of a back-to-back?

1st Period Thoughts:  The game had a bit of a feisty tone to it early as both clubs were finishing their checks.  Rasmus Ristolainen leveled Mikael Granlund with a hit as he tried to play the puck with his skates.  On the same shift, Vladimir Sobotka got knocked down by a hit by Nick Seeler.  Minnesota would break the stalemate as Zach Parise swept up a loose puck in the neutral zone and he’d race in and wire a slap shot that rang off the far post and in.  1-0 Wild.  The physical play continued as Matthew Dumba stepped up to catch former Minnesota State star Casey Nelson with a big hit.  The Sabres would take a penalty, as Jack Eichel was sent to the box for hooking.  Minnesota would take advantage of the power play as the team won the initial draw and worked it out to the point where Dumba stepped into a slap shot that blazed by Linus Ullmark to make it 2-0 Wild.  The Wild continued to apply pressure in the Buffalo zone and Jordan Greenway would strip Kyle Okposo of the puck and then try to jam a shot through Ullmark, but he was able to come up with the stop.  The Wild kept attacking in waves, working pucks in close and if they did pull the trigger from perimeter they were did a nice job of deflecting shots and keeping Ullmark on edge.  Minnesota would earn another power play after nearly cashing in on a close range chance for Greenway.  Unfortunately the power play would be short-lived as Mikko Koivu hauled down a Buffalo player when he just didn’t have the speed to keep up with the play.  With the ice a bit more open 4-on-4, the Wild were looking to counter attack but few thought it would be Eric Fehr and Marcus Foligno but they nearly added to the Wild lead when Fehr set up Foligno for a point-blank range bid that Ullmark denied.  Shortly after the 4-on-4 expired the Sabres went on the attack and Rasmus Dahlin made a nice play to step around Seeler and then delivered a perfect diagonal pass to Jake McCabe who lifted a shot over Devan Dubnyk.  2-1 Wild.  Minnesota would go back on the attack and had a few dangerous opportunities but just couldn’t get the puck to settle when they had a chance at an open goal after some terrific puck movement in and around the Sabres’ goal.  The crowd appreciated the effort and the offensive pressure and they’d give the team a small ovation at the conclusion of the period with the Wild holding a 2-1 advantage.  Minnesota outshot the Sabres 18-9.

2nd Period Thoughts:  The Wild renewed their assault on the Buffalo zone, as Mikael Granlund set up Jason Zucker with a savvy bank pass off the boards that got him behind the Sabres defense but he was stonewalled by Ullmark.  The Wild were swarming all over the offensive zone but Ullmark was keeping his team within one.  As the Wild kept being stymied from adding to its lead, the Sabres would start to take their chances to attack as Johan Larsson nearly tied the game as he batted a puck out the air that gave Dubnyk some trouble.  Buffalo got Minnesota on its heels with some strong shifts.  At times the Wild were guilty of being a little too fancy with the puck and they squandered potential scoring chances.  Fortunately the wild would simplify its game and Ullmark found himself under siege.  The Wild were taking any chance to fire pucks on goal no matter what line was on the ice.  There was a bit of uneasiness in the sellout crowd as the Sabres seemed to be ‘too close for comfort’ as Minnesota’s 2-1 lead seemed tenuous at best despite outshooting Buffalo 30-20 to this point.

3rd Period Thoughts:  The 3rd period would start with both teams being cautious of making a big mistake that would give their opponent a prime scoring chance.  You could tell Minnesota wanted stay in the driver’s seat of this game.  Buffalo was just waiting for an opening it could exploit.  Dubnyk (a double pad stack to deny Eichel) and Ullmark both had to come up with some good saves with players bearing down on their respective crease.  The Wild’s 4th line of Eric Fehr, J.T Brown and Matt Hendricks were hustling well and creating some trouble on the forecheck and the line seemed to be getting closer and closer to lighting the lamp.  Dubnyk would deny Larsson 6-7 feet from the top of the crease before pouncing to cover the loose puck.  You could sense the anxiety in the crowd as they’d gasp with every shot attempt.  With players looking afraid to make mistakes, the passing got worse and the Sabres would tie the game in the middle of the period as Eichel would get a shot from in close that Dubnyk stopped but he couldn’t manage to cover up the puck and an alert Rasmus Dahlin chipped it in.  2-2 game on Dahlin’s 2nd career goal.  You could sense the Wild were a bit frustrated as Seeler and Casey Mittelstadt exchanged shoves with one another.  The Wild seemed content to just try to play keep away and the Sabres would score with 1:30 left to play as Jason Pominville spun and let go a backhander that beat Dubnyk.  3-2 Sabres.  The Wild would pull Dubnyk but only could manage a few shots from the perimeter and they’d fall to the Sabres.

Devan Dubnyk played well enough for the Wild to win, making 26 saves in the loss.  He made some terrific saves to keep the Wild ahead in this game as at times the Wild were coughing up the puck not to far from his crease.  The penalty kill was perfect on the evening but it was the carelessness with the puck, especially in the 3rd period which gave the Sabres the chances to win the game.

Offensively the Wild got off to a great start, but then couldn’t find a way to bury the puck despite piling up over double the amount of scoring chances than the Sabres had.  From time to time, the Wild was guilty of trying to be too fancy and making some kind of perfect tic-tac-toe play instead of what the Sabres were giving them.  When Minnesota kept it simple, the Wild appeared to be on the cusp of scoring but at the crucial moments they couldn’t score and thus they left the Sabres off the hook.

This is the kind of game that you think about for days or even weeks after its done.  The Wild seemed to have the upper hand, against a club that was on the 2nd half of a back-to-back and yet Minnesota didn’t seem to have the jump in its skates to really pull away and bury their opponent.  Instead they let Buffalo keep it close and at the end of the night they end the night with a loss.  The Wild will not have long to lick their wounds, as they travel to Chicago to play the Blackhawks tomorrow.  Hopefully the loss makes them play with more urgency and determination to finish off the back-to-back with a victory.

After shutting out Milwaukee 3-0 on Wednesday, the Iowa Wild would give Kaapo Kahkonen, who was working on back-to-back shutouts the start against a very motivated Admirals’ squad.  The 1st period was tight with the Admirals creating some prime chances but Kahkonen was up to the task.  Iowa would finally break the stalemate early in the 2nd as Gerald Mayhew outlegged a Milwaukee defender for the puck to move in on a breakaway where he finally managed to get a puck by Tom McCollum.  The Wild would dominate most of the play in the 2nd period, but McCollum was solid.  Iowa would score late in the period as Colton Beck buried a nice pass from Kyle Rau.  2-0 Wild going into the 2nd intermission.  In the 3rd, the Wild would bust the game wide open as the struck 4 times on goals from Mitch McLain, Matt Read and two from Rau.  The game also had plenty of feistiness as Mike Liambas dropped the gloves with Jarred Tinordi and the smaller Liambas schooled the much taller Admirals defenseman.  After Matt Read’s goal in the 3rd he was punched in the face by Jeremy Gregoire and Read wasn’t too happy and he didn’t back down, but both players would get tossed from the game.  The Admirals pressed hard late to try to bust the shutout, but Kahkonen stonewalled them as the Wild prevailed 6-0.  That gives the Finnish goaltender 3 shutouts in a row, the longest shutout streak in franchise history.

RW – Ivan Lodnia (Niagara, OHL) ~ the Novi, Michigan-native had a big night on Thursday where he earned 2nd star honors for lighting the lamp once and having two helpers in the Ice Dogs’ 6-3 win over Hamilton.  Lodnia has 7 goals, 20 points, 10 PIM’s and is a +2 in 20 games.

LW – Jack McBain (Boston College, H-East) ~ the freshman winger had his 1st collegiate goal on Friday with a 2nd period tally against New Hampshire.  McBain has a goal and an assist so far this season, with 6 PIM’s and is a -1 in 6 games.