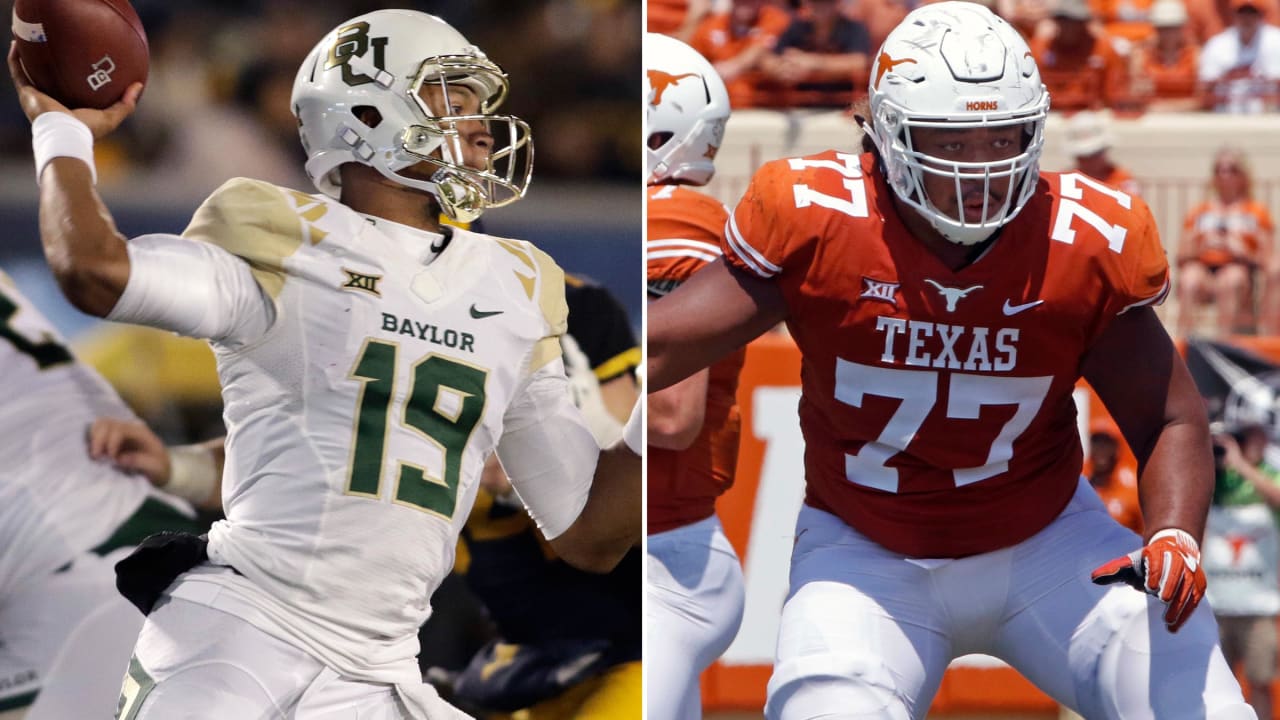 Clifton Brown (BaltimoreRavens.com) was there. He saw it:

The Ravens signed quarterback Jalan McClendon and guard Patrick Vahe to free agent contracts Monday. Both were undrafted free agents who impressed in the Ravens’ rookie minicamp earlier this month.

Baltimore is now at its full limit of 90 players, which includes four quarterbacks.

“McClendon, who played at Baylor, threw impressively during the lone minicamp practice that was open to the media, showing strong velocity and a nice touch. At 6-foot-5, 219 pounds, he has the classic quarterback size and will give the Ravens another thrower in offseason practices to join Lamar Jackson, Robert Griffin III and sixth-round draft pick Trace McSorley.

“McClendon backed up Ryan Finley (a fourth-round pick of the Cincinnati Bengals last month) at N.C. State for three years before transferring to Baylor, where he played in nine games (one start). He completed 55-of-91 passes for 715 yards, three touchdowns and three interceptions. McClendon drew NFL interest during the NFLPA Collegiate Bowl practices.

“Vahe was a four-year starter at the University Texas, including 14 games during the 2018 season when he started at left guard. The Ravens’ starting job at left guard is expected to be an open competition that will include Alex Lewis, James Hurst, Bradley Bozeman, and fourth-round pick Ben Powers. The 6-foot-4, 320-pound Vahe was not invited to the NFL Combine, but he showed off his strength at Texas’ Pro Day.”

After being invited to rookie minicamp, Vahe displayed enough potential to compete for a spot on the 90-man roster. At least one undrafted free agent has made the Ravens’ 53-man roster for 15 straight years.
Some stranger things have come out of Ravens rookie minicamps. These guys are super-long-shots to make it, but…
Meanwhile,

“Since joining the Seahawks with the 14th overall pick of the 2010 NFL Draft, Thomas’ work on the backend of the Seahawks’ secondary has put him among the very best to ever play the position,” Chichester wrote. “His coverage grade of 92.7 is the fifth-best mark among qualifying safeties in that nine-year span, while his 64 combined pass breakups and interceptions and his 80 total coverage stops rank second and fourth among safeties, respectively.

“While [Thomas] may be 30 years old and coming off another broken leg, he’s graded at 90.0-plus in each of the past two seasons and has shown no signs of slowing down. Now with a chip on his shoulder and a new home in the bruising AFC North, Thomas has a point to prove with a team that will allow him to do so.”

Good Morning Football’s Nate Burleson picked Thomas as the player he’s most excited to see return from injury this season.

“If you think about Thomas, there’s really only a handful of teams that his type of style would fit on, and the Ravens are at the top of that list,” Burleson said. “… So they need an individual that can come in and help anchor that defense once again. That was the best defense in football. So, I’m looking at Thomas, man. I want to see if he still has it quite frankly.”

“If Thomas is healthy he is a true ball hawk in the back end of the defense,” Schisler wrote. “When you have shutdown cornerbacks and a free safety with this kind of instinctual feel for the game, quarterbacks are in trouble.”

Thomas was on the practice field for the Ravens’ offseason workout program in April and by all indications, the leg looks ready to go.