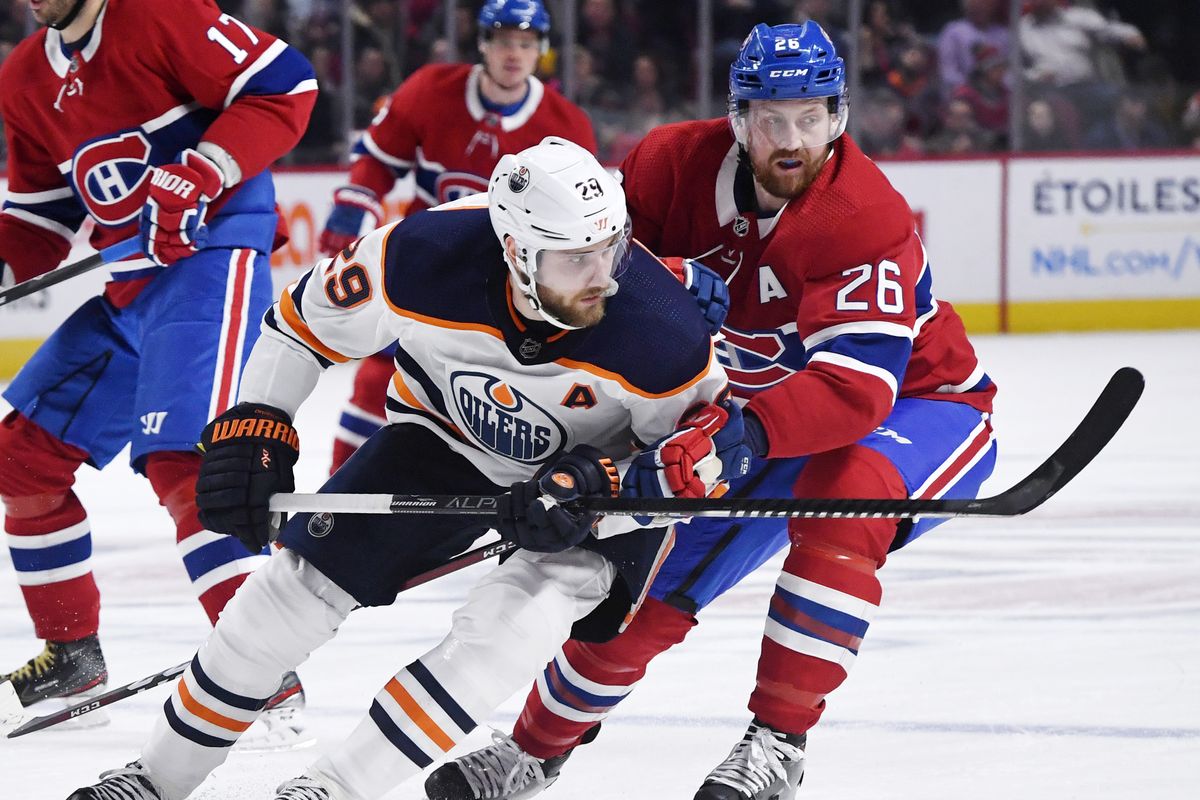 The Edmonton Oilers, winners of five of their last six games, will conclude a four-game road trip tonight in Montreal. The Oilers dropped the first game of the trip 6-4 to Calgary on Saturday night, but rebounded with a 3-1 win in Ottawa on Monday, and a 3-2 decision on Tuesday night. The Oilers are looking for their second three-game winning streak of the season.

This is the third of nine meetings this season between the Oilers and Canadiens, who met twice at Rogers Place in Edmonton last month. The Canadiens won both games in relatively convincing fashion. This is the first meeting of the season in Montreal between the sides.

Jake Allen gets the nod for the Canadiens, while Mike Smith gets the start for the Oilers.

Edmonton: Better puck possession will be vital for the Oilers tonight. In the final forty minutes of Tuesday’s win in Ottawa, the Oilers struggled to sustain any kind of pressure against the Senators. Any chances they got were one-and-done, while the transition game was non-existent. Part of that was certainly fatigue, but the Canadiens are a strong possession team and will run away with this game if the Oilers aren’t better in this area.

Montreal: Be physical. It dates back over a decade now, but the Oilers do not like it when the game gets physical. The Canadiens did an outstanding job of leaning on the Oilers last month and creating all kinds of problems with their ability to physically win battles and clog up the neutral zone. The Canadiens should again be able to slow the Oilers down if they bring that edge to the table.

Edmonton: James Neal is getting his time to shine at five-on-five. With Jesse Puljujarvi out of the lineup, Neal will skate on the right wing of Connor McDavid with Ryan Nugent-Hopkins on the left. Neal has a good shot and offensive instincts, but hasn’t really gotten going this year. This should be a golden opportunity for him to kickstart the offense at even strength.

Montreal: Josh Anderson is a perfect mix of size, skill, physicality and puck possession. Quite frankly, he is the perfect player for a Claude Julien coached team. Anderson has made an immediate impact with the Canadiens and has become one of their best players. He’s someone that will be worth keeping an eye on tonight. He’ll have an impact on this game win or lose.

The Edmonton Oilers have placed their first player on the NHL’s COVID-19 Protocol list this season. Winger Jesse Puljujarvi was added to the list and won’t be available tonight. He could be on the shelf much longer if he has a confirmed positive test. That, however, we do not know yet. Neal is expected to return to the lineup and replace him.

Caleb Jones and Kris Russell are expected to be the scratches for the Oilers in Montreal, while Ethan Bear is still injured.

The Canadiens enter tonight completely healthy. They played last night at home against the Toronto Maple Leafs, dropping that game by a score of 4-2. It was just the third regulation loss of the season for the Canadiens.

“Our confidence has, for sure, grown,” Connor McDavid said this morning about this rematch with the Canadiens. “I like where our game is at compared to where we were when we played them last time. That being said, they’re a really good team. Have big, strong D, good goaltending and their forwards, all four lines can play.”

Tonight’s game has been postponed to 8:00 pm EST / 6:00 pm MT due to COVID-19 concerns. Depending on what transpires between now and then, the game may not even take place. Puljujarvi was placed on the COVID-19 Protocol list and is not eligible to play tonight. If he has tested positive, he will need to isolate in Montreal for ten days. The Oilers have had additional testing done and are awaiting the results.

If the Oilers are to get revenge against the Canadiens, they’ll need to be better on special teams. The Oilers were 0-for-10 on the powerplay in the first two meetings, and surrendered a pair of shorthanded goals. Although Edmonton scored a shorthanded marker of their own, the Canadiens went 2-for-7 on the powerplay. Edmonton as -3 on special teams in the two meetings, which won’t cut it against such a good five-on-five team.