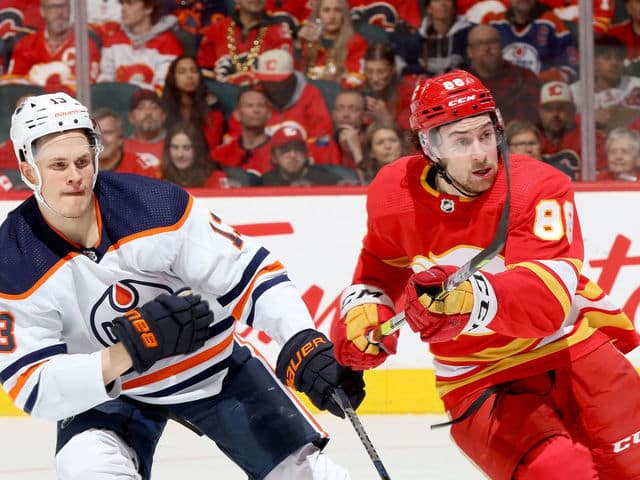 The Oilers and Puljujarvi avoided their scheduled arbitration hearing by agreeing to a 1 year contract, at $3 million per year. Although it is hardly a definitive answer to the will-they-or-won’t-they dance that the two sides have been engaged in since the Oilers drafted the big Finn.

Although the cap hit is not a big commitment itself it does underscore the limited space the Oilers have to operate. As the cost of unloading salary increases the Oilers will have to be deliberate in their dealings heading forward, with RFAs Yamamoto and McLeod still to sign. The most widespread speculations surround Foegele and Barrie as their combined ~$7 million cap hit is not efficient given their relatively limited roles in this lineup. Time will tell if the Oilers have to move anyone, or perhaps if a more surprising move materializes.

The already precarious nature of a hard salary cap, combined with the stagnant reality of its COVID growth has led to a tightening of the belt. League-wide the value of cap space is being “weaponized” as those teams that were big spending dreamers scramble to become cap compliant. A prime example would be the ripple effect that UFA spending had on the Blue Jackets trading away Bjorkstrand for what most would consider a slight return. The Oilers were compelled to offload Kassian’s contract already, but the work might not be done just yet, as the Oilers were aggressive in Free Agency in retaining both Kane and Kulak, alongside the Jack Campbell acquisition.

The Puljujarvi discourse has been quite polarized for years, with most Oilers fans, fans across the league even, fairly entrenched in their opinions of the player at this point. The rift goes beyond hot takes and tweets, as we have seen clearly that Puljujarvi’s fit on the team going forward is not a subject that the player and the front office agree on.

The attention has lead to many long, well scouted profiles being published about the strengths and shortcomings of the former 4th overall pick, with comparisons to Nichushkin, or various statistical breakdowns, as much as there have been criticisms from corners of Oilers fans and media, indifference from the front office, and even rumours that players high in the lineup would rather play with others instead of Puljujarvi. While I can’t speak to the legitimacy of said rumours there are many fans who bemoan his troubles finishing, going along with the volatility of highs and lows given Puljujarvi’s inconsistencies, injuries, confidence, and non-linear development path.

Even if Puljujarvi is not able to maintain the top offensive form we saw him deliver in the early month of the 21/22 season, which is entirely possible, he remains a very effective player, posting exceptional impacts on team defence, notably forming a formidable combination with McDavid, as the pair’s flow of play numbers (such as expected goals percentage) towering above any other combination of 2 Oilers.

Skater defence is extremely difficult to qualify through statistics or viewings, but the fact that Puljujarvi’s numbers have skewed so heavily towards the positive, even as far back as his underwhelming rookie season, illustrates that his impact on the game is no fluke.

Puljujarvi’s profile as a defensive forward not only compliments the otherworldly offensive talent of McDavid, but that support affords Coach Woodcroft the ability to play an offensively minded scorer on McDavid’s left wing in good conscience. Although Woodcroft’s brief tenure has shown us that he is not afraid to shake up his lines, there’s little reason to believe that it should be anyone other than Kane or Draisaitl to flank the McDavid-Puljujarvi combination, and that their results will be elite.

This could be a contentious issue for Oilers fans in particular as both Kane and Draisaitl are not regarded well by many individual defensive metrics. Kane, especially, has impacts that suggest his offensive contributions are canceled out by equal and opposite struggles defensively. Regardless, both Draisaitl and Kane are crucial goal scorers that are much needed in this lineup. If anything this merely underscores how valuable Puljujarvi is to this Oilers roster, not only in the level of his play but also in how his play diversifies the team’s skill set stylistically.

All of these points are well illustrated on this player card from JFresh: 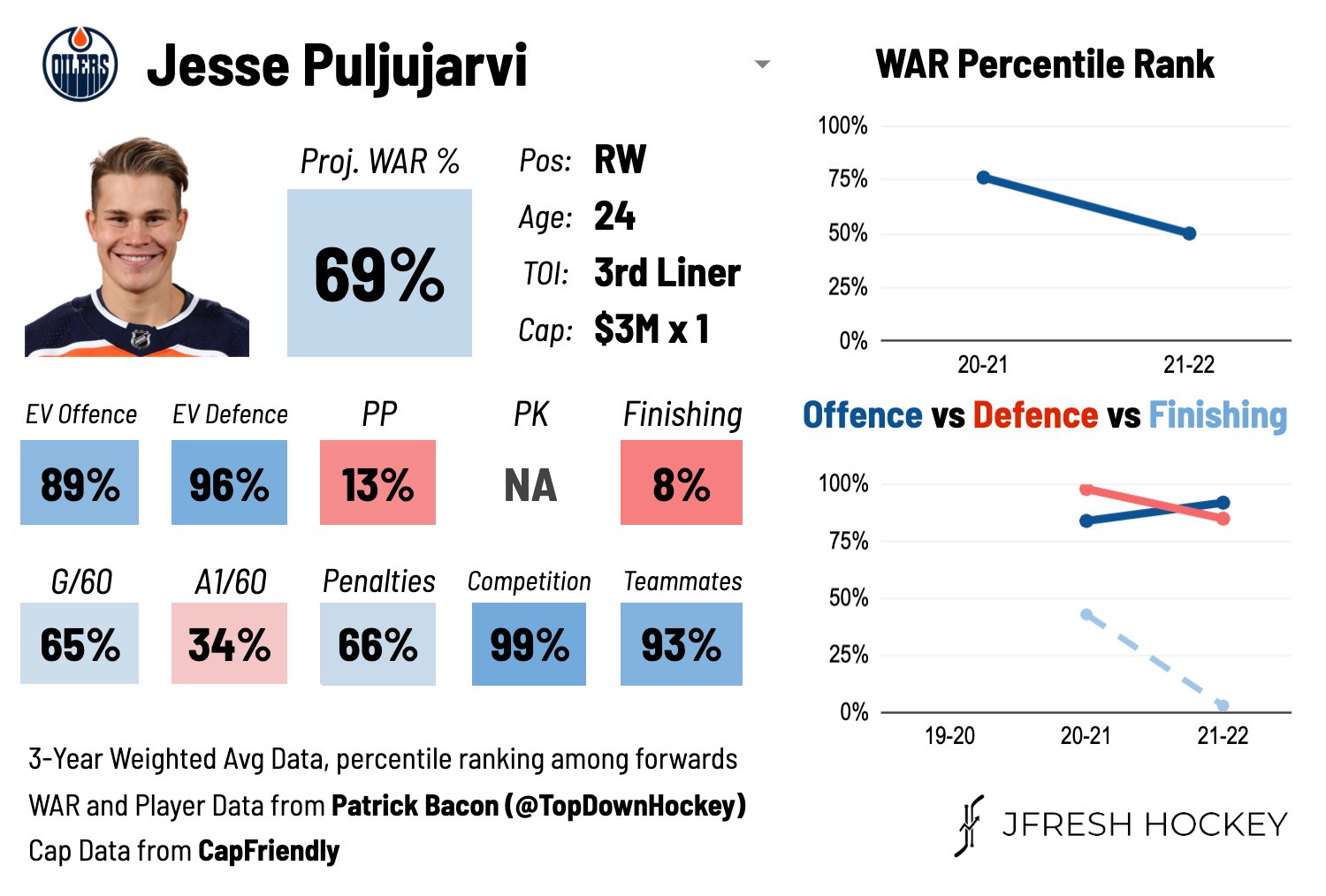 For those unfamiliar: the projected WAR% is the total score represented relative to the league, EV Offence and EV Defence are flow of play metrics, whereas G/60 (goals per 60 minutes) and A1/60 (primary assists per 60 minutes) are production based.

We can see that despite very strong numbers when it comes to controlling play, as well as playing with and against top players (shown in competition and teammates) Puljujarvi’s struggles in passing and shooting limit his individual production. Oilers fans are well acquainted with awkward moments from Puljujarvi, leading some to overlook the strong aspects of his game altogether.

Perhaps the height of Puljujarvi’s stock was during his incredible performance at the World Juniors, on a line with Patrick Laine and Sebastian Aho. We can see why this line was so effective not only because of their skill level, but how their styles complimented each other. Having a skilled passer with elite transition skills (McDavid and Aho) as well as an elite finisher (Draisaitl, Kane, or Laine) allows Puljujarvi’s two-way play and forechecking to fit in perfectly. If he’s able to hone or refine his individual skills, shooting, passing, balance, for example, it would go a long way in turning Puljujarvi from deceptively good to outright great, the very transition we’ve seen Nichushkin undertake recently.