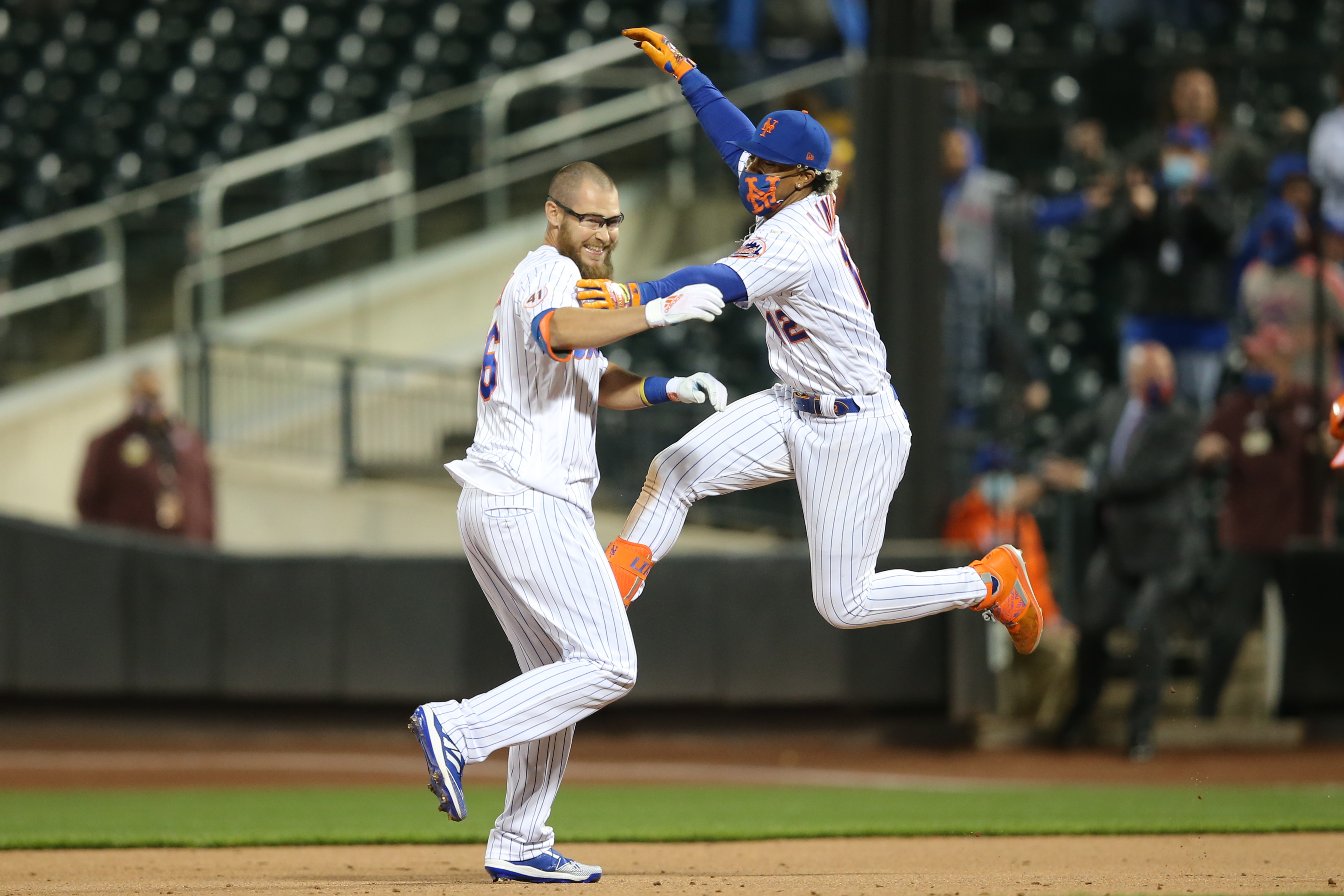 And a partridge in a pear tree.

Marcus Stroman and John Means matched zeroes throughout the first six innings, and besides the stellar pitching, the early part of the game was marked by Jeff McNeil pulling up lame trying to stretch a single into a double. McNeil was diagnosed initially with “body cramps” which, I mean, at least the NHL would have told us if it was upper body cramps or lower body cramps. Jeez.

In the top of the 7th, Means was pinch hit for with the bases loaded while Stroman was pulled for Aaron Loup to face the lefty. But Pat Valaika pinch hit for the lefty and drove home Freddy Galvis with a sacrifice fly. Galvis and Makiel Franco led off the 7th with singles to set up the run which gives me the opportunity to say how glad I am that they’re not in the division with the Phillies because I’m sick of those guys killing the Mets every other day.

Albert Almora Jr. just hit the center field wall as hard as you can possibly imagine going for this ball that turned into a triple pic.twitter.com/shawB7Wr3p

Thankfully (and amazingly in Almora’s case), both Almora and McNeil should be more or less fine.

Luis Rojas says Jeff McNeil "feels like he dodged a bullet" having suffered just a cramp in his leg. He should be fine with some hydration.

Albert Almora has some posterior shoulder pain, but x-rays to his shoulder and neck were negative. He'll receive more tests tomorrow.

Where was I, oh yeah. Trevor May was an inch away from navigating a leadoff triple, but Galvis dropped an annoyingly beautiful two out bunt to bring the run home and give the Orioles a 2-0 lead. As good as the pitching was for both teams, that made it feel like 10-0. I wasn’t hopeful. But Michael Conforto singled home a run in the bottom of the 8th to get the Mets closer. Pete Alonso ended the threat with a double play, making it still sort of feel like 10-1, but the bottom of the ninth would bear fruit.

Cesar Valdez came in for the bottom of the ninth, and Kevin Pillar immediately jacked what Roberto Ortiz thought was a home run, but the rest of the umps gathered Ortiz towards them and said “look, if we have to have a long review on this then Carig is going to tear us apart in the Athletic, so just trust us, it was a foul ball.” Pillar, whose trot around the bases turned into nothing more than exercise, responded with a single to left. Jonathan Villar followed with a single to right to bring up James McCann. 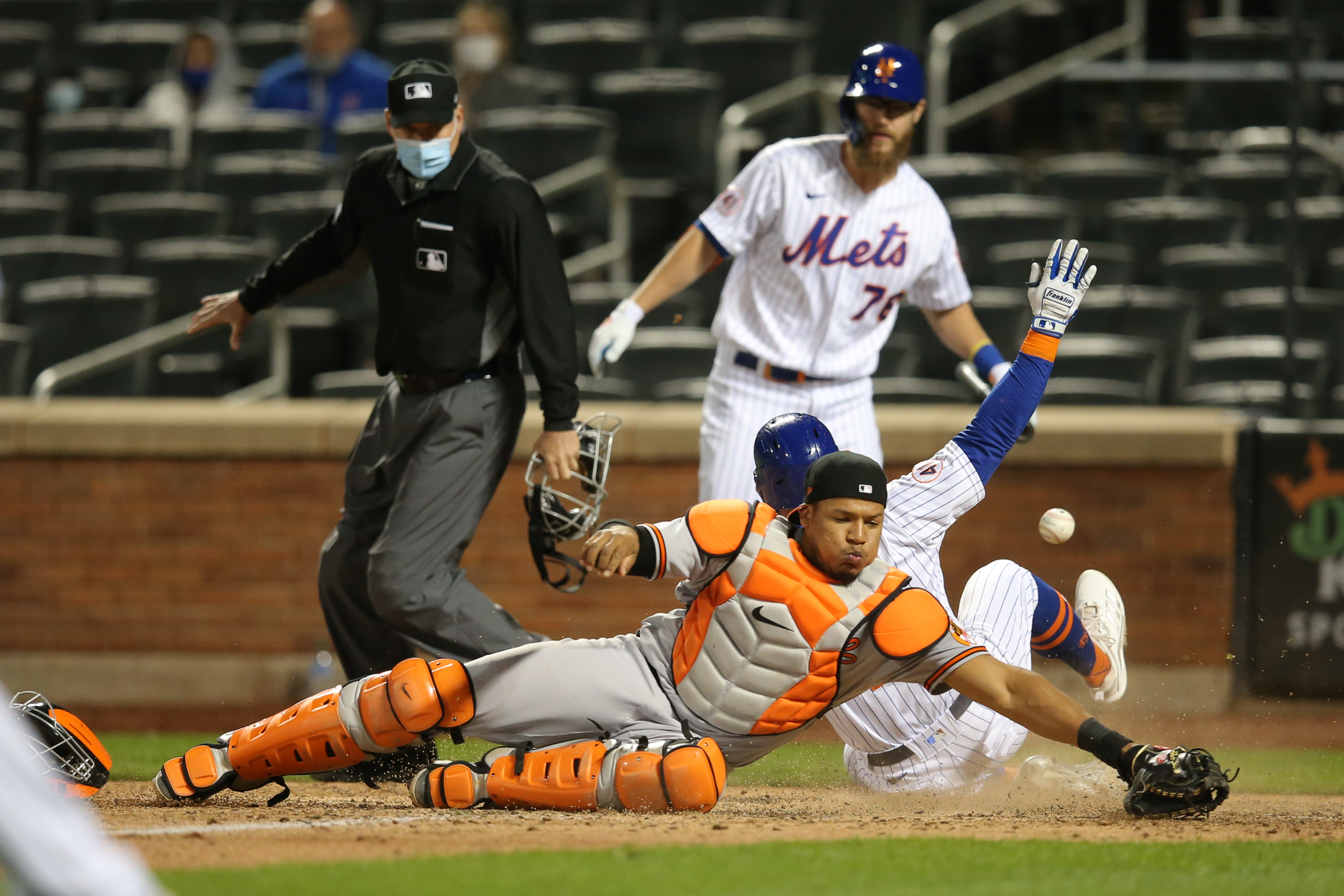 McCann tried to bunt the runners over, which I didn’t like because Dom Smith would have probably been immediately walked with first base open to load the bases for Patrick Mazeika. Fortunately, McCann’s bunt attempt was so bad that Luis Rojas said “screw it” and reinstated the hit sign. Or for McCann, it was the “just don’t ground into a double play” sign, which McCann didn’t as he struck out on a dead fish for the first out. Donnie Stevenson had no comment on the matter.

(Editor’s note: Nobody knows how to bunt. Teach them to bunt or stop calling the bunt. It’s painful. Also, stop telling me that players knew how to bunt in the 60’s. The 60’s are over. Acknowledge the evolution for better or worse.)

Dom Smith, who is now able to swing the bat because McCann didn’t hit into a double play, took a Valdez sinker and dunked it into right center to tie the game and bring up Mazeika with Villar on third and Smith eventually on second.

Still not sure Patrick Mazeika is a real person, but sure, why not?

He’s real, and he’s … about as spectacular as you would imagine a fielders choice would be. Mazeika grounded to Trey Mancini who came home to try to get Villar at home. But not only is Villar fast, he got a great jump off contact and Mancini had no shot at him. Mazeika now has two walk-off RBI on fielder’s choices which led to two shirtless celebrations on the field. And no major league hits.

Mazeika looks like he was dared to run into Gray’s Papaya and spread mustard on himself shirtless after a night of jager bombs and paint huffing. But you know what, it matches the vibe of this looney season. It’ll only get loonier tomorrow.

Did you see the dust up between Todd Frazier and a Pittsburgh radio personality?

That’s all I got.