Tomas Nido, Cameron Maybin And The Absorbtion Of Cobb County 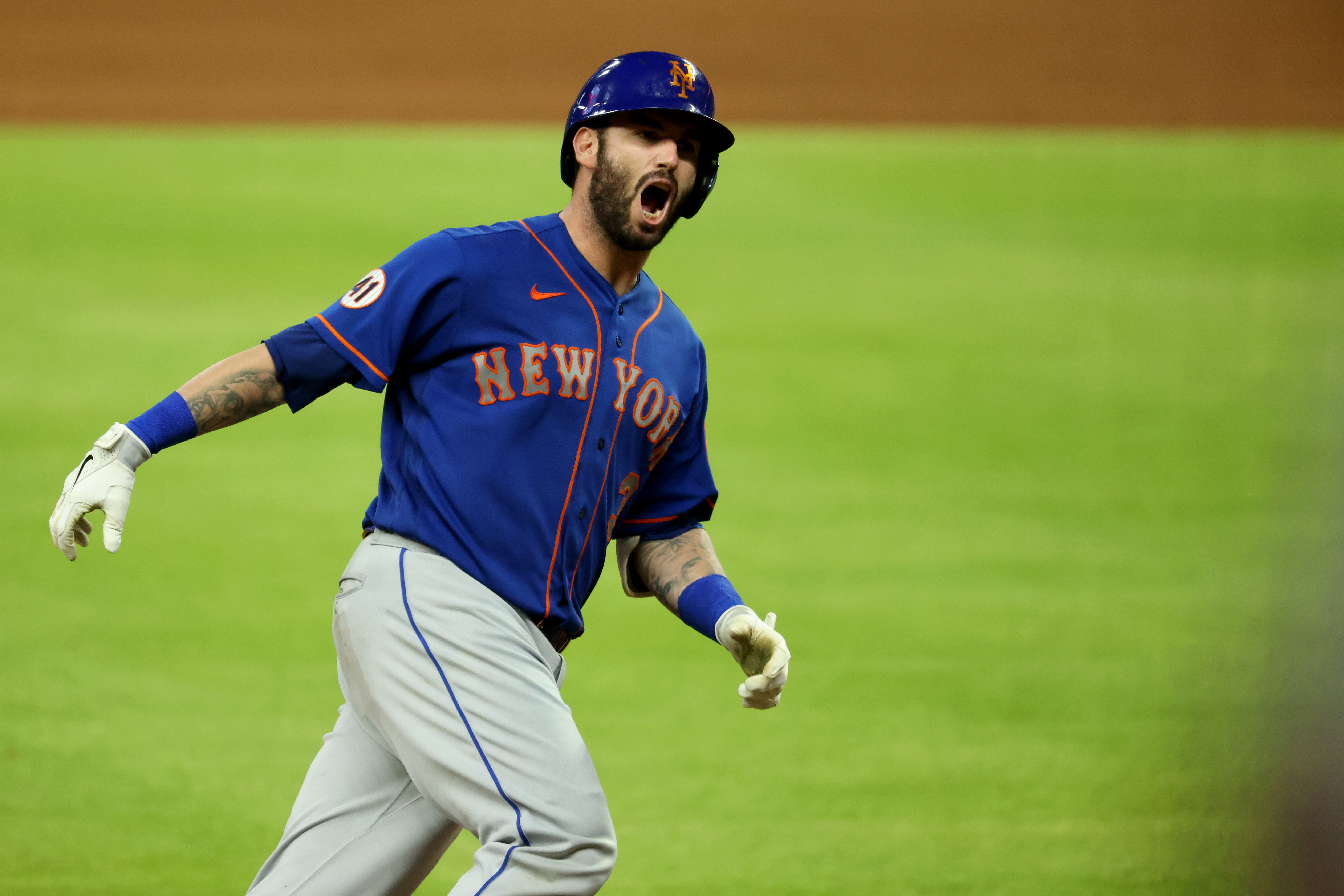 Tomas Nido, Cameron Maybin And The Absorbtion Of Cobb County

So they acquired Cameron Maybin for cash considerations. Well, the cash consideration was one dollar. Maybin is, by all accounts, the most solid of citizens. And he can come up from Syracuse and give the Mets a warm body until their injuries start to heal. I just hope that Maybin very quietly stubs his toe or something, because if we’re in the middle of Final Destination: Mets Outfielder edition, I hope that any future injury that Maybin suffers as a rite of passage is relatively minor. 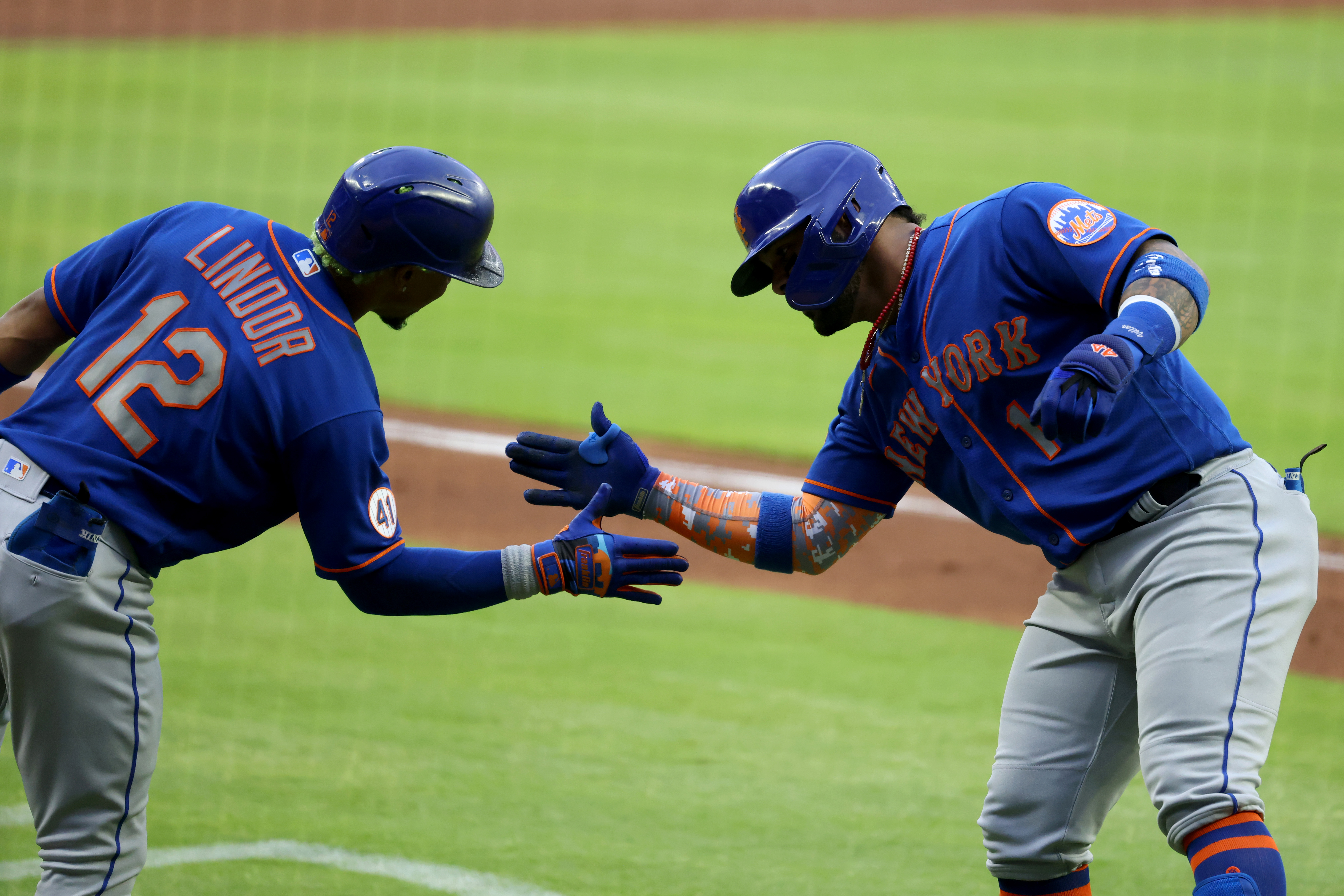 Jonathan Villar’s two run homer in the third got the Mets off to a great start, and let’s not forget that it was a two run HR, and that Villar got a chance to hit a HR at all, because Tommy Hunter got his first major league hit at the age of 33. And while we’re speaking of hidden memories that shouldn’t be so hidden: After the teams went back and forth to make the score 3-2 in the 6th, and after Freddie Freeman’s solo HR led off the 6th, Khalil Lee gave the Mets a jolt with a catch that may or may not have saved themselves a bigger inning than just Freeman’s home run:

KHALIL LEE TO THE RESCUE!!! pic.twitter.com/69GtNN84dH

Jeurys Familia ran into his usual bad luck in the 8th. Ehire Adrianza doubled to lead off the inning (on a play where I could swear Francisco Lindor got the tag down), and then walked Ronald Acuña. But Freddie Freeman grounded into a double play where Lindor made a great play to tag the runner and flip to first. So all Familia had to do now was make a good pitch to Marcell Ozuna. And he did. But Ozuna got a broken bat hit to bring in Adrianza from third and tie the game.

But Tomas Nido who, to show you how decimated the Mets roster is, was batting fifth tonight, smacked a home run off gopher prone Will Smith to give the Mets a 4-3 lead. That left it in the hands of Edwin Diaz who was pitching for a 3rd straight night. It could have been dicey. Instead, he gave Dansby Swanson and Austin Riley wipe out sliders to dispose of them before getting frappeur de pincement élite Pablo Sandoval to fly out harmlessly to center field to end the game and clinch the series victory for the Flushing nine. 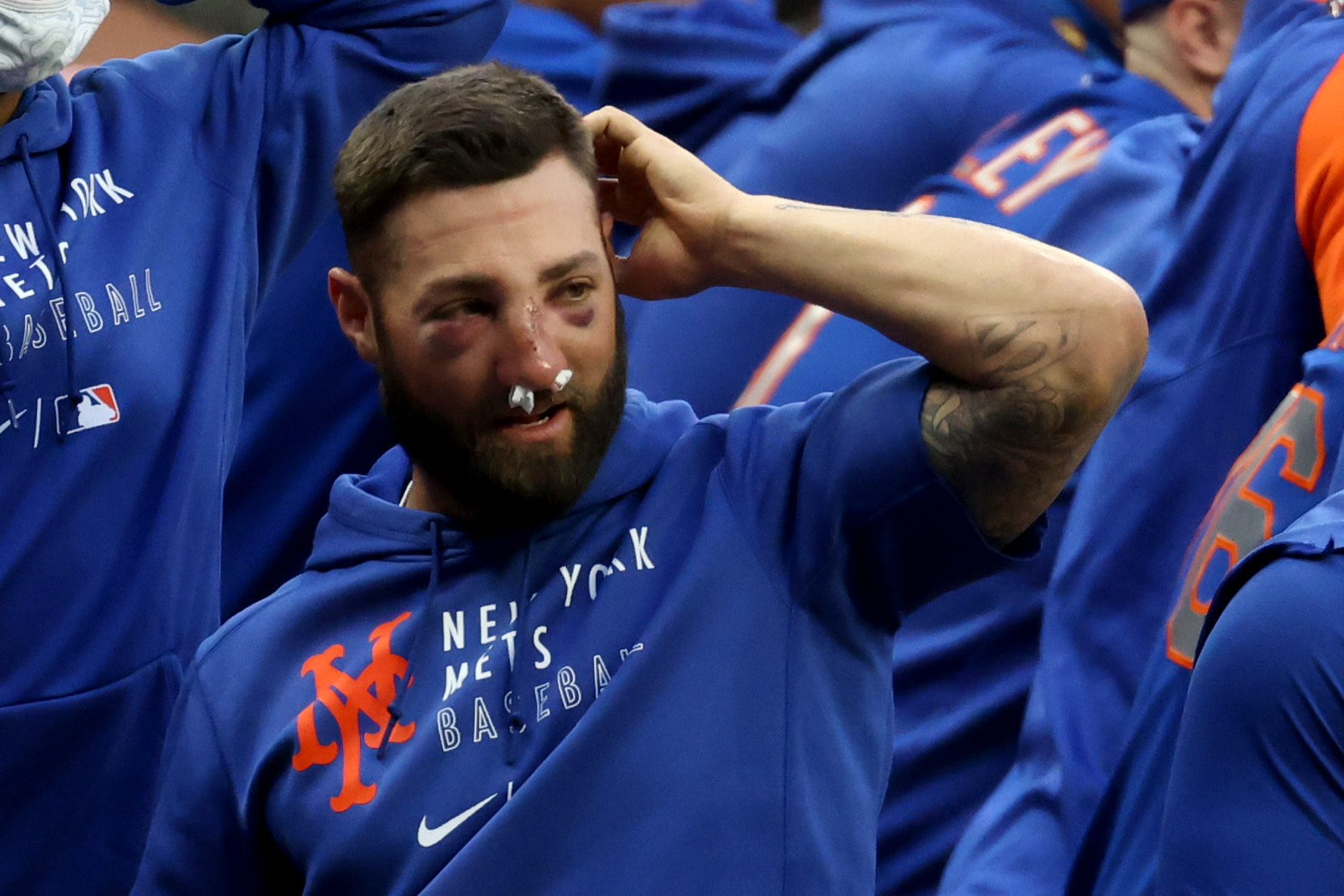 May 18, 2021; Atlanta, Georgia, USA; New York Mets outfielder Kevin Pillar supports teammates after he was hit in the face with a ball suffering a nasal fracture the night before against the Atlanta Braves at Truist Park. Mandatory Credit: Jason Getz-USA TODAY Sports

When the season ends, with the lens of history to provide proper perspective, I will look back on this day as the one that convinced me to be all in on this team. Hopefully it’ll also be the day that convinced the Mets that they could be something special. The Kevin Pillar beaning could have destroyed the psyche of this team once and for all. That and all the injuries would have had past Mets teams built with the depth of a brook and the jaw of Tommy Morrison buried. This team, while far from healthy and far from clicking offensively, is in first place. The face of this team and the soul of this team might be one in the same, and it’s the one you see if you scroll up. Kevin Pillar and his broken nose and barely functioning eyes showing up to the park asking half jokingly if he’s in the lineup tonight is what the 2021 Mets are morphing into. They’re not indestructible. But if you draw blood they’ll ask for more. If you take another outfielder, they’ll go get Cameron Maybin for a buck. They are Tony Montana. They are Robocop. They are the Trapper Keeper from South Park …ever expanding and absorbing its surroundings to include Maybin and whatever minor leaguers they need to include to keep moving and absorb the super computer in Cobb County before the 9th inning tomorrow night.

They are Kevin Pillar. Cotton nosed and two black eyes. Asking to be in the lineup.