Tylor Megill has been an absolute revelation, and he’s getting better with every start.

He threw six shutout innings (and also got his first major league hit off old friend Steven Matz) to set it up for the bullpen, who knocked the Jays down for a 3-0 victory, their second straight shutout. The Blue Jays were Tylor’s biggest test to date, and he passed with flying colors.

I went into this game wanting to take an especially close look at Vladimir Guerrero Jr.’s at bats, as he works his at-bats so well and not only has a great eye at the plate, but has a plan when he gets up there. It’s the reason why he is a legitimate candidate for A.L. MVP (but we all know who is going to win it, right?) So I kept a close eye on him.

First at-bat, runner on first with one out. Megill gets ahead of him 0-2. Then tries to get him to chase a high fastball and Vladdy spits on it. Then there’s a low pitch right at the bottom of the zone that’s borderline, Vladdy spits on that too for a 2-2 count. Megill then goes to the slider and it’s outside for a full count. Then a foul ball, and then the Jays send the runner on the next pitch, which is a fastball that runs inside. Vladdy chases it for strike three, perhaps because the runner was going, but it’s still a good pitch because even though it was inside, it was competitive. It gave the illusion of a strike and that was all Vladdy needed to chase it. George Springer would then pop up to end the inning. 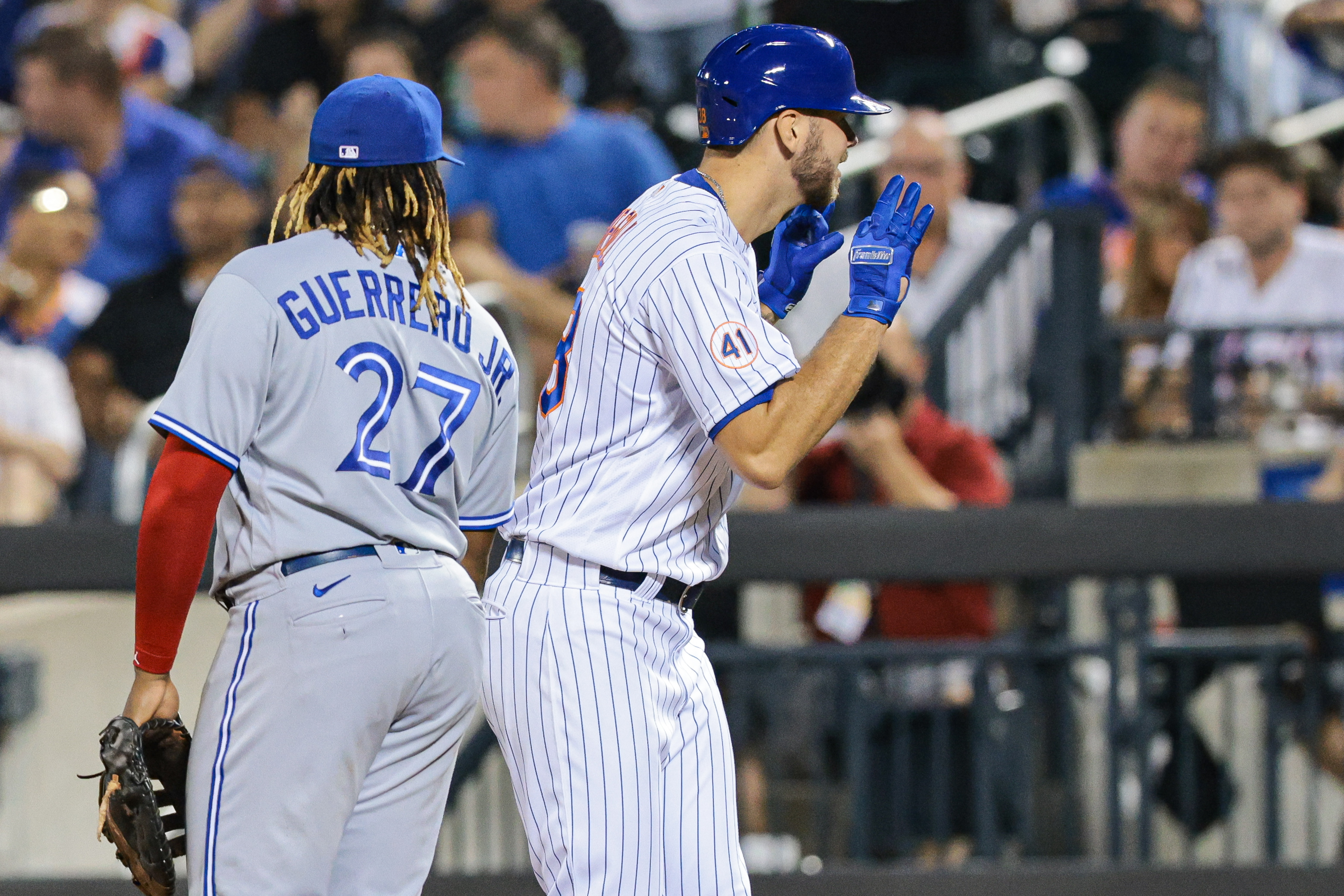 The next matchup between Megill and Vladdy is leading off the 4th. The Mets have a 2-0 lead after Pete Alonso’s rocket in the first inning. Megill throws a curve low and inside for ball one, then throws a fastball at the top of the zone but doesn’t get the call for 2-0. A changeup in the dirt for ball three, and now Megill has a decision to make. Waste a pitch and don’t let Vladdy take you deep, or throw a competitive pitch and hope for the best. Megill throws what could have easily been a cookie for strike one, but remember that hitters swing at 3-0 now. So Megill threw a ball that had just enough cut on it to jam Vladdy just a little bit, and he flew out to center for the first out of a 1-2-3 inning, instead of a walk which leads to who knows what.

Then in the sixth, immediately after Michael Conforto made an amazing catch for the second out, it’s Megill vs Vladdy again. This wasn’t the epic battle the other two at-bats were, as Vladdy grounded to shortstop on the second pitch, but he once again jammed him with a pitch running inside to induce the grounder. That was Megill’s final bit of action for the night, and it was enough. Those three at-bats encapsulated the key to success for Megill thus far, and hopefully in the future … he trusts his stuff.

The rest of the game featured nothing but good news. Seth Lugo pitched an effective 7th inning, Trevor May pitched a 1-2-3 eighth, and Pete Alonso hit a home run to Mars to give Edwin Diaz one final insurance run. Then he took a ride on Chester the Home Run Horse:

Diaz threw ball one to Dante Bichette, usually a sign of trouble, and then got him out on a rocket to left, setting up one final Mets battle with Guerrero. Frankly, Diaz got lucky on it. He was lucky that Vladdy didn’t tattoo strike one, a 99 middle middle fastball. Then he was lucky that Ryan Blakney gave him strike two, which was a few inches outside. Vladdy then resorted to protecting the plate, and swing at a pitch on the high outside corner for a foul ball, then he lined a 100 mph fastball to center for the second out. All fastballs.

Diaz then got Springer on a good slider to end the game … only Diaz’s second slider out of ten pitches. Is Diaz back? I don’t know, but he got the save and that’s what counts. Tylor Megill got his first major league win as the present defeated the past. Pete Alonso has four home runs since the Home Run Derby, which is the real proof that he’s the best power hitter in the league. And the Mets now have a horse. Things are looking up.

Instead, I want to remark on the Rich Hill trade, which I don’t hate at all. Sure, Hill is a five and fly guy, but it was better than we were getting from some of their other guys, who aren’t stretched out to go longer for some reason. And Hill, as was remarked tonight by Trevor May, is one of the most competitive people in baseball, which means if I was a Met, I would watch out for him in the checkers tournament or Fortnite tournament or whatever they do in that clubhouse.

What strikes me about Hill is that this is reminiscent of when the Mets were desperate for starting pitching in 1987 and traded for John Candelaria, who went 2-0 for the team but had a 5.84 ERA. Stylistically, Hill is extremely reminiscent of Frank Tanana when Tanana was with the Mets in his final season.

Now, Tanana (couldn’t find anything from his Mets days, so you’ll have to settle for these early highlights when he threw harder):

But Hill’s reliance on off-speed stuff was just like where Tanana was in his final season with the Mets, which is what kept him in the league so long, and what is keeping Hill in the league until the age of 41.

If Hill has one more of those nine inning no-hitters in him, that would be great. I’m sure the Mets will try to get him a run for this one. Hell, we’d settle for a seven inning no-hitter at this point. We’re not picky.