Our Kind Of Ugly 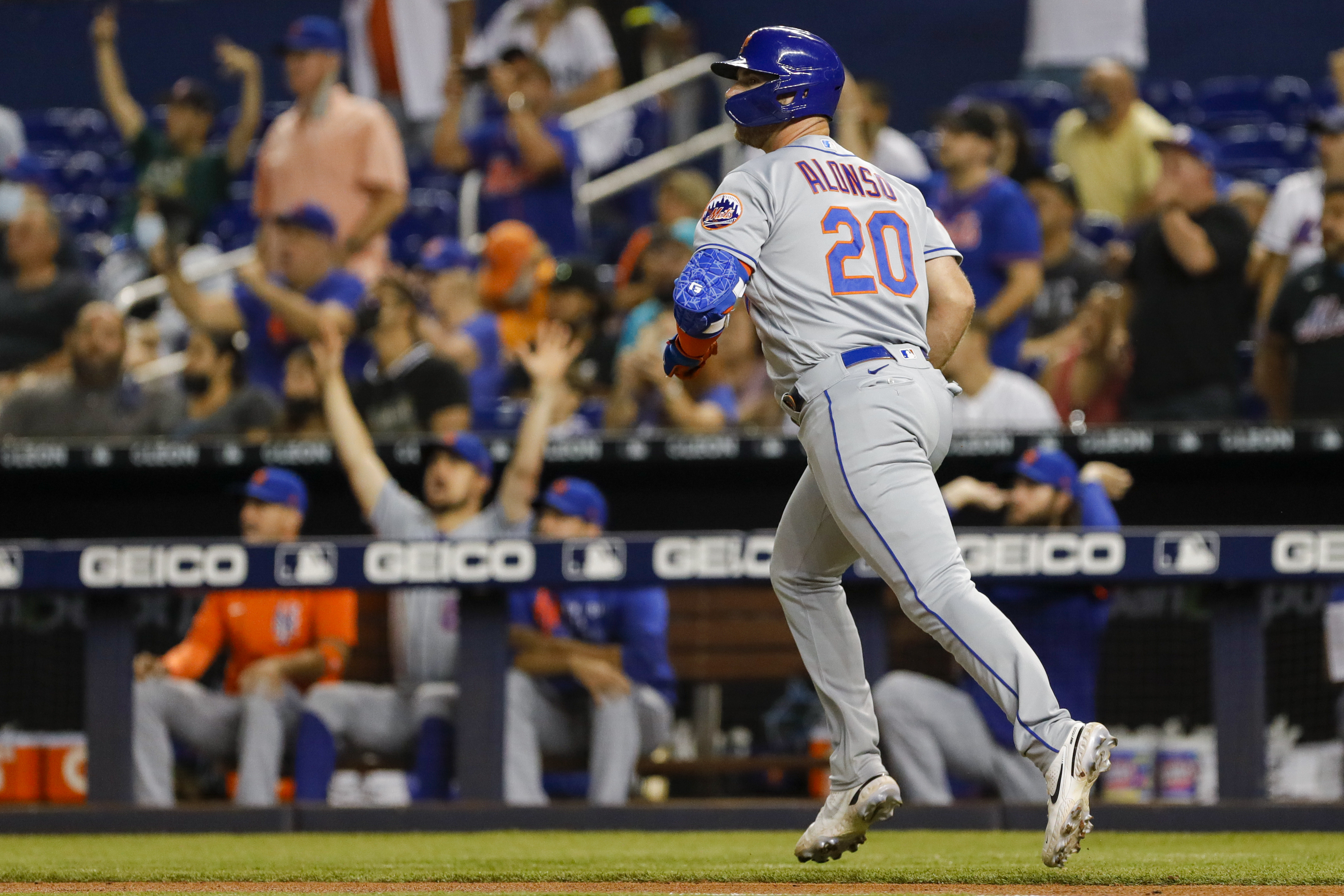 Our Kind Of Ugly

First off: Stupid Marlins and their stupid 6:40 start times. I flipped on SNY at about 6:52 and expected to see Gary Apple tell me something inane about Carlos Carrasco’s career ERA on Tuesdays, or what was the betting line on whether there would be a Jerad Eickhoff reference during the broadcast, sponsored by Points King or Draft Bet or whichever gambling overlord was sponsoring the segment. Instead I see Pete Alonso crossing the plate. Was SNY airing a Mets Classic because there was a delay at Marlins Park because the fish tank broke?

No, it was live. Pete Alonso hit his 100th career home run to give the Mets an early 2-0 lead, which everyone probably missed because of the 6:40 start time. And no, there’s no fish tank anymore because Derek Jeter wanted to give LoanDepot Park a more professional atmosphere. Except that he leaves for a couple of days to be inducted into the Hall of Fame, and there’s breakfast cereal behind the plate distracting the pitchers:

The rest of the game was completely off the rails. Carlos Carrasco only gave up half a Carrasco in the first, then gave up three more unearned runs thanks to errors by Francisco Lindor in the second leading to a run, and Jonathan Villar in the third leading to two runs, plus a three hour review on what exactly Villar’s throw hit. (Jeter was worried about fish tanks, but there’s a goddamned bank of lights in the dugout for some reason.) The Mets defense was basically a Kevin Pillar impression of Willie Mays and a Villar impression of Brooks Robinson away from looking like it was the 1962 Mets Yearbook.

The Marlins were no better defensively. They gave the Mets two free runs by hitting Michael Confroto and Javy Báez with the bases loaded to give them a brief 4-2 lead before the Marlins tied it in the bottom of the third. Then in the 6th, the Mets took advantage of an error by Joe Panik which lead to another error by Jazz Chisholm which brought home a run to make it 5-4, and then Lindor drove in a couple with a single which gave the Mets a 7-4 lead. Aaron Loup was stellar, Trevor May got deftly himself out of a 7th inning jam, and the Mets proceeded to put the icing on the cake with a J.D. Davis RBI double in the 8th and Pete Alonso’s 101st career homer in the 9th to give the Mets a 9-4 win that somehow still ended way later than a ballgame should have ended even though they started at 6:40. 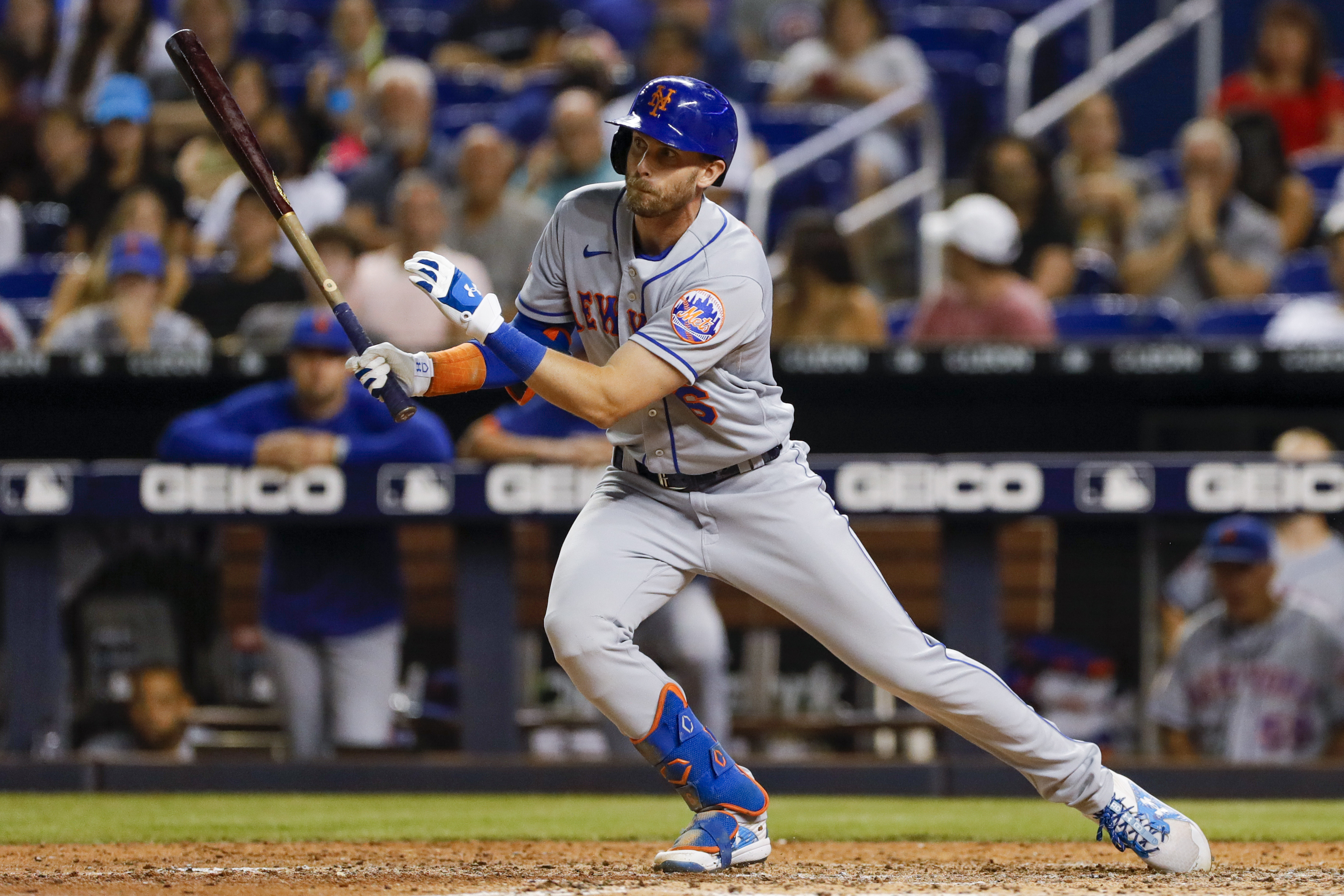 Ugly or not, long or short, the Mets did what they were supposed to do, beating teams with pitchers like Sean Guenther, Paul Campbell, and Zach Pop. Campbell and Pop seem like they would form a company that would have been responsible for creepy breakfast cereal going behind home plate and staring down a pitcher known as Cookie. There has to be some sort of strange coincidence with all of this, as I believe this was all a marketing ploy to get us all to eat. If these games go much longer, they’re going to end around breakfast time anyway.

The Nationals did their best to give us back a game in the standings, but they’re still the freakin’ Nationals, and the Braves beat them 8-5 to keep the Mets four games behind Atlanta. As far as I know, the Nationals were not being stared down by cereal.

Okay, so I gotta get on the Mets here. Before the game, Sandy Alderson gave an update on Jacob deGrom’s injury. Now remember, he hasn’t pitched since July 7th, and nobody seemed to know what the hell was going on. So all of a sudden, Alderson gives us this:

Sandy Alderson said Jacob deGrom’s elbow injury was a sprain/partial tear of the UCL in his right elbow.

“The ligament is perfectly intact at this point,” he said. “Whatever condition existed before, it’s resolved itself.”

More Alderson: "Somebody goes out with a headline that it’s a partial tear, that’s what a bruise is. A bruise is a partial tear of the muscle, OK? So let’s not go out there and write as if this is anything new. It’s not. It’s a very low-grade thing that has resolved itself." https://t.co/0eXyk9J9FO

Sandy is the kid who is left alone for the first time, and spills milk all over his mother’s nice coat, and then tries to cover it up by cleaning it with Comet Cleaner or something stupid, and it’s really obvious that the coat was compromised.

Nothing new? deGrom has been out for exactly two months and there was no updates. None. Nobody knew what the hell was going on, or at least that’s what you told us. Now? “Oh yeah, he had a torn UCL but he’s fine now.” Oh gee, thanks. Either you couldn’t spot a common injury like a torn UCL for two months or you just kept everything from everybody, even for a month after the trading deadline passed which is the only semi-legitimate reason to be clandestine. Awesome. I don’t know which explanation makes me more afraid. Both have me more scared of the nightmares I’m going to have of cereal that wants to kill me.