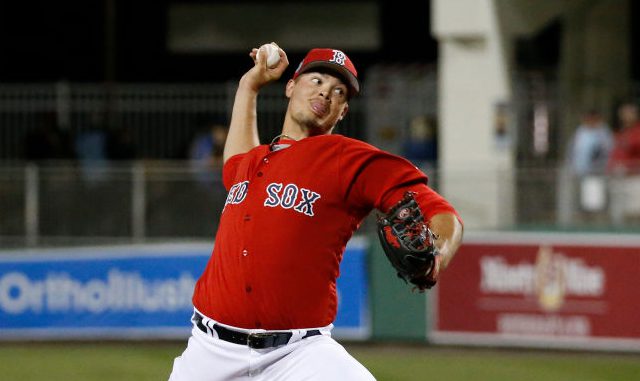 I wanted the Mets to bundle their assets and get a prized prospect back. Maybe the Mets tried to do that, but other teams wanted to order a-la carte from the Mets. So Sandy Alderson seemed to adjust and trade for power arms that could contend for bullpen roles in 2018. Drew Smith from the Rays, and Jamie Callahan and Stephen Nogosek from the Red Sox seem to be the three guys who are close to battling for bullpen roles with the Mets next season. It’s a risky strategy, because the Mets have put themselves in a position to have to be near perfect with these trades to field a good bullpen next season. Considering how fickle a reliever’s success is from season to season, those odds aren’t high to begin with. Jeurys Familia, A.J. Ramos and Jerry Blevins will be back. The rest of the spots are up for grabs and the Mets could really use two out of the above group if not all three to break out of spring training next season to help this beleaguered pen save itself from the Hansel Robleses and the Josh Edgins and the Neil Ramirez-types from jamming another season down an undersized toilet.

Could the Mets have played it differently? Perhaps. Addison Reed was a guy who supposedly had ten teams interested in his services. But the Mets dealt with the Red Sox who are wealthy enough to not be swayed by the Mets potentially offering to pay the rest of his salary in exchange for better prospects. Hence, the three bullpen arms came their way. Give the Mets credit for buying low on Reed and selling high, but I’ll always wonder if they could have sold a little bit higher rather than trading for low ceiling middle relievers. But I speculate on that without knowing what Alderson’s conversations were like with all those teams, so maybe they couldn’t do better than they did. Besides, there’s risk factor in high ceiling prospects too. You can look at Zack Wheeler for proof of that.

The failure was probably not getting rid of more guys. Jay Bruce would seem to be a perfect candidate to trade to other teams with the season he’s having, but there just aren’t a lot of teams that have a hole in right field or DH. Asdrubal Cabrera’s value is at the floor for teams that want a shortstop, and teams probably wouldn’t give a lot for a guy who the Mets have portrayed as a cancer and would be used by his new team either out of position, or a bench player. Curtis Granderson only has value as clubhouse glue at this point, and Jose Reyes’ sole value probably lies in his ability to be friends with Amed Rosario (who is finally up with the big club to turn on a fire hose and point it at charred wood.)

The Mets have provided double frustration. First, the frustration of not being a contender, and then the frustration of not being a team built to sell off pieces. There were no Yu Darvishes or Sonny Grays on this team that had enough value to bring back major prospects. A healthy Matt Harvey might have done that. An injured Zack Wheeler was good enough to be a piece in a Carlos Gomez trade two seasons ago. Now, he can’t bring back lunch. Only Jacob deGrom could have brought back significant pieces, but the Mets … rightly … held on to him.

The one thing I will say is that if this is the best the Mets could do at the deadline because they’re not into the total rebuild and they’re putting all their chips into 2018, then they better put their chips into 2018. That means getting a new catcher, a center fielder who can play center field and push Michael Conforto into right field (though I have a feeling that the Mets would rather keep Conforto in CF and convince Jay Bruce to stay), and perhaps a new second baseman. If you’re selling us the building of a team to compete next season, then get a team for next season. Go all the way and not just sell us the four guys you got in the Lucas Duda and Addison Reed deals as the saviors for 2018. Omar Minaya tried building a bullpen in 2009 and saying “done”. Didn’t work out quite right, did it?