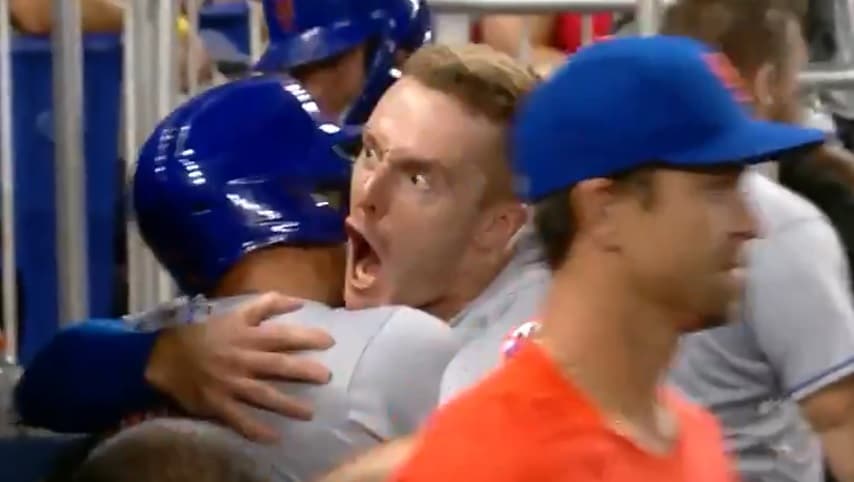 Chris Bassitt was a victim of some well placed contact in the first inning of Friday’s game against the Marlins, which culminated with a two out bloop double by resident Marlin pain in the ass Miguel Rojas to make it 3-0.  After a two out walk to Lewin Diaz, Avisail Garcia hit a bleeder against the shift for a hit (which Bassitt was very upset about after the inning, but if you saw the overhead on the shift, Jeff McNeil’s placement would have been legal in the proposed “pizza slice” shifting rule), J.J. “Dynomite” Bleday hit a check swing bleeder to Luis Guillorme for another hit before Rojas’ double, which was off his fists for crissakes. But soft contact or not, going down 3-0 to Sandy Alcantara in Miami (where he has had a 1.66 ERA in 76 innings this season) could seem like a death sentence.

But this team, as I’ve probably said 100 times this season, is different. The Mets came right back in the second inning. Mark Canha doubled to right (after a generous call on an 0-2 pitch), and then with two outs came what is probably the most key at-bat in the game. Alcantara was up 0-2 on Tomas Nido, but somehow lost him. Alcantara’s pitch count was already elevated after a 23 pitch first inning, but losing the free swinging Nido with two outs and 0-2 was a crime that the Mets would take as a sign that Sandy was hittable tonight, and that they would make him pay for as Brandon Nimmo cracked a double off the center field wall to drive in Canha to make it 3-1, and then Starling Marte tripled home Nido and Nimmo to make it 3-3 in the blink of an eye.

I’ve said it before and I’ll say it again: In past seasons, this team would have laid down and died … probably because they weren’t talented enough to come back instead of any lack of intestinal fortitude, though that could have been a residue of not being talented enough. This season, because the roster is fortified with talent (and was just fortifed a little more with the acquisition of Tyler Naquin, with more to come I’m sure), this team is able to come back constantly from deficits like this (though tonight, Alcantara’s lack of command probably played a part too.)

The Marlins got a run back in the 2nd to take the lead. But in the 4th, Starling Marte hit a solo shot to center to make it 4-4, one pitch after Alcantara came up and in on him to brush him back. The funny part about that dinger was that Alcantara put it right where the catcher wanted it: up and away. But Marte is so locked in right now that he can hit anything that any pitcher throws. He’s so locked in that maybe Juan Soto should be following Marte around and not the reverse.

Brandon Nimmo hasn’t been so locked in lately, so to see him crush that Alcantara pitch to center for a double was marvelous. But what he did in the 8th was even better. With the score still tied 4-4 …

BRANDON NIMMO WITH A 2-RUN HOMER FOR THE LEAD

(and absolute SCENES in the dugout!) pic.twitter.com/D7ZVfKACDT

It was the type of homer that would end movies. Lefty batter against lefty pitcher, slider that grooves right to the lower inside corner so that Nimmo could put a beautiful uppercut on it to lift it out. The celebration in the dugout was also movie worthy … not that anyone is making any movies about a Mets/Marlins game in July, but you know what I mean.

Trevor Williams locked down the 8th inning after the home run as Buck tries to patch things together before Billy Eppler trades an order of tater kegs for David Robertson. Edwin Diaz came within a fraction of an inch of an immaculate inning after Ronnie mentioned at the start of the inning that he hadn’t done that this season (which is a little spooky), but three K’s in ten innings was more than acceptable as the Mets avoided the dreaded and imagined “Subway Series Hangover” with a 6-4 victory. (You can’t have a Subway Series hangover if you don’t treat the Subway Series like the World Series.) The Mets are now 25 games over .500 and in the midst of a season so good that even Nimmo is cursing like a sailor! (Sort of.)